Edhi Will Remain In Our Hearts!

The Richest Poor Man Abdul Sattar Edhi ; yes the father of humanity he is! Edhi Sahab’s education was humanity, his religion was humanity and he served the humanity selflessly. One year is passed since he left this mortal world. But have we forgotten him? Can anyone forget him? No! Because Edhi is not a just a name, Edhi was not just a man; Edhi is an ideology. 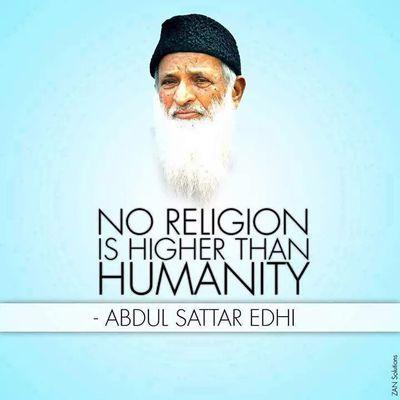 Born in 1928 in Indian sub-continent a boy was taught by his mother to give half of what he has to the needy. He never wished anything for himself. He gave society more than was his due share. People called him names, tried to defame him and even called him kaafir. But as the truth is “Wa Tuizzu man tasha Wa tu zillu man tasha” , his honour and respect is of the level that whenever you will be wanting to donate to any charity the first name is always Edhi Foundation. From an elite official to a small child everyone knew that Edhi is genuine, that Edhi will always work for humanity and not for his personal causes. Today marks the death anniversary of the Father Of Humanity Abdul Sattar Edhi.

Edhi foundation is still working with the same zeal under Faisal Edhi today as it worked under Abdul Sattar Edhi Sahab. So stand with Edhi as nation as always stood before with him. Because millions living in Edhi homes, the needy women, the old parents who have no where to go and the children who only know Abdul Sattar and Bilqees as their parents need you.

We at reviewit remember the Father Of Humanity today and wish that all of you will remember him in your duas and will stand for what he stood because as he said: “No religion is higher than humanity.”