Sanam Baloch showed a side of her which outraged many people when she was questioning Aamir Liaquat about why his first wife did not accept his second marriage. The way she asked this question was all wrong in the eyes of the people. 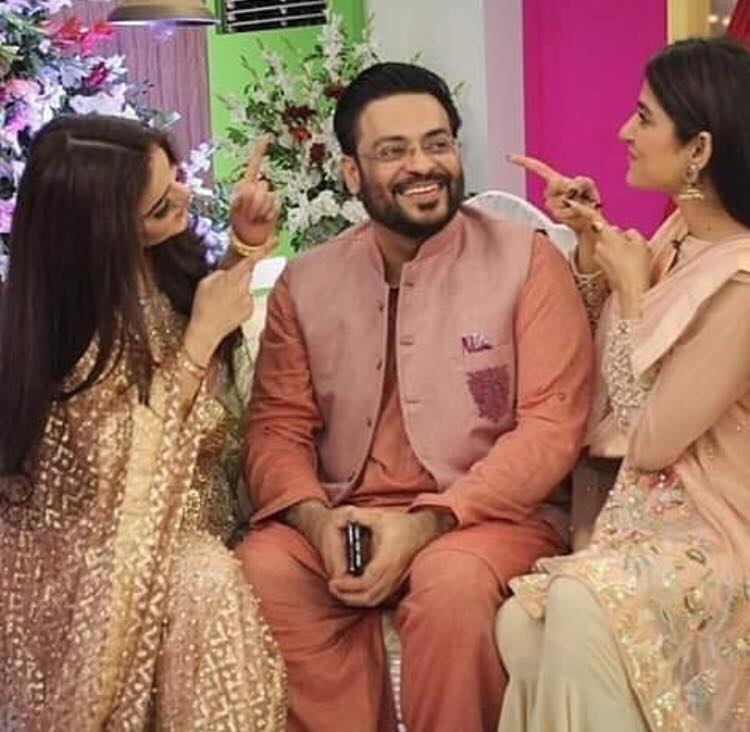 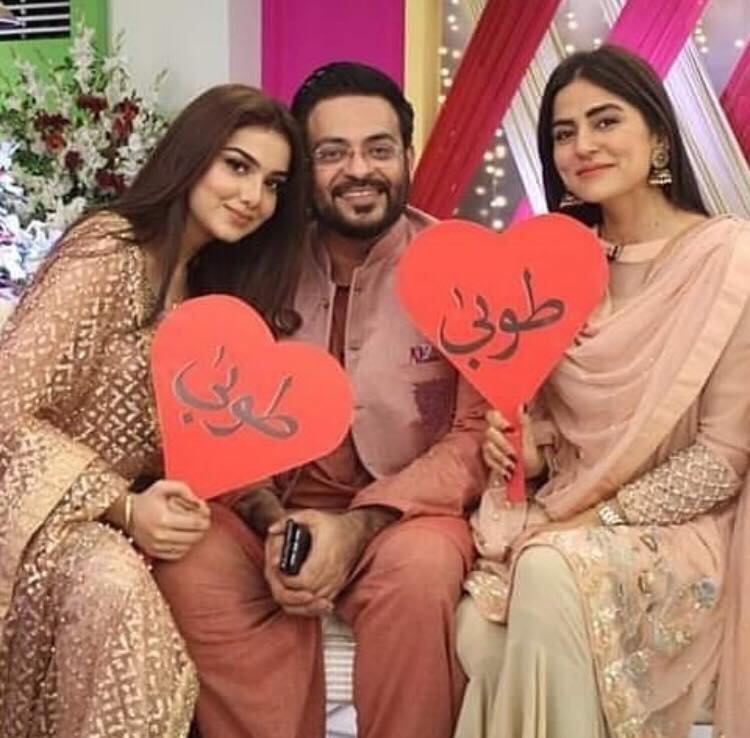 Sanam Baloch was once known for conducting decent morning shows but she is losing her popularity and reputation fast. Her judgmental tone and her habit of being so interested in other celebrities personal lives has made people very angry.

#SanamBaloch truly disgusts me. According to her, #AamirLiaquat has proved how ‘deendar’ he is by marrying a second time and in a full version of her morning show interview with him and his second wife #SyedaTubaAnwer (not in this video but trending on Facebook and Twitter) she assists him in dissing how his first wife hasn’t accepted his second marriage, pinpointing it as her lack of religiousness. Such utter disregard for the feelings of his first family while she stoops to new lows, nodding sympathetically when he says that his children are Tweeting sad messages on the prompting of his first wife. What gives her the right to broach a topic that must be so painful for his first family to hear – and to justify him so wholeheartedly. If @thesanambaloch wanted ratings, she’s gotten them – her interview with the newlywed couple has gone viral. But not in a good way. She’s also being hated through and through. The sad thing is, in the many nooks and corners of the country, morning shows are watched avidly and morning show hosts are lauded as role models. Let’s just do Pakistan a favour and #banmorningshows. Let’s #banSanamBaloch at least.

Sanam Baloch could have talked to Aamir Liaquat about his second marriage without bashing his first wife but she made sure that there was masala on her show at the expense of Aamir Liaquat’s second wife and children.

Aamir Liaquat’s answer was also just as foolish as the question. Here are people’s reaction to it. 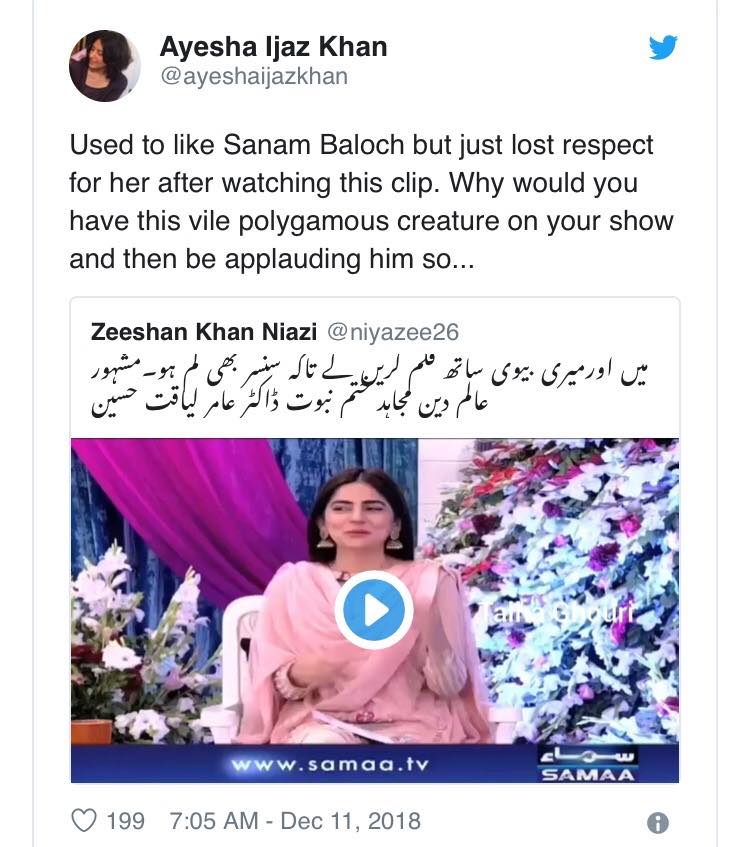 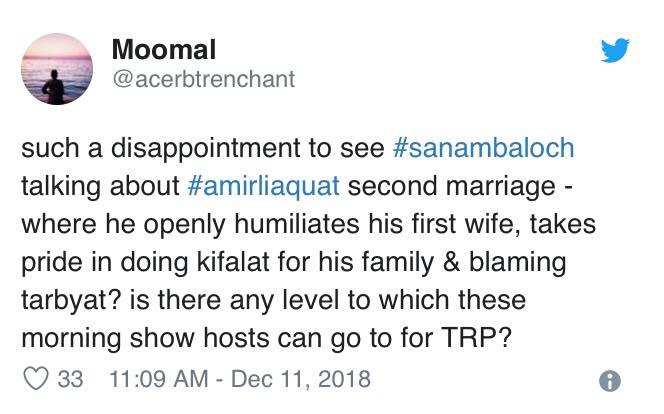 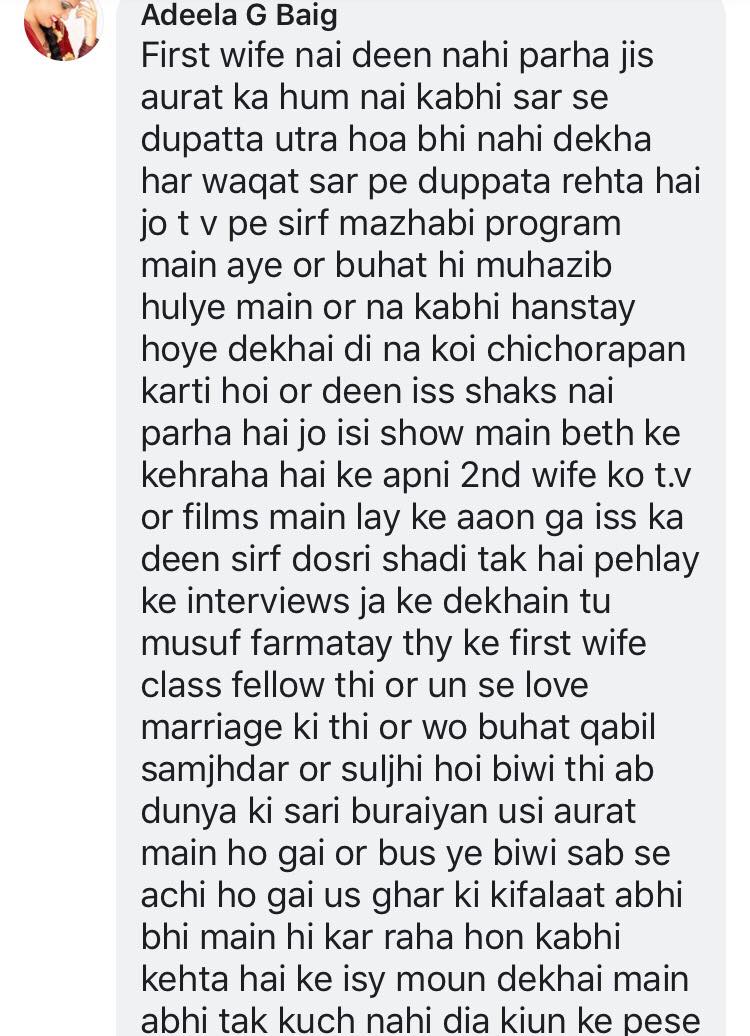 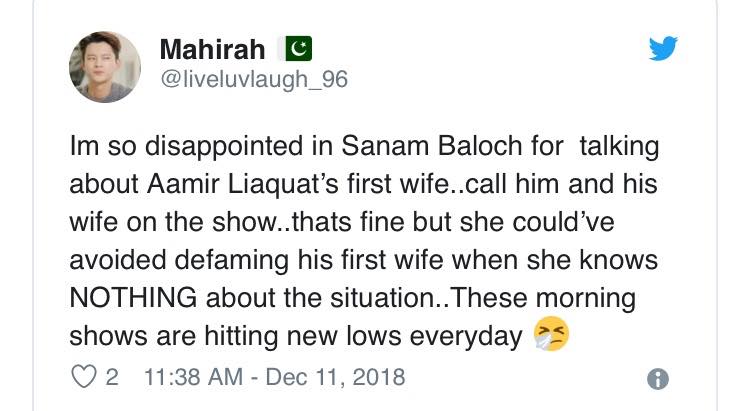 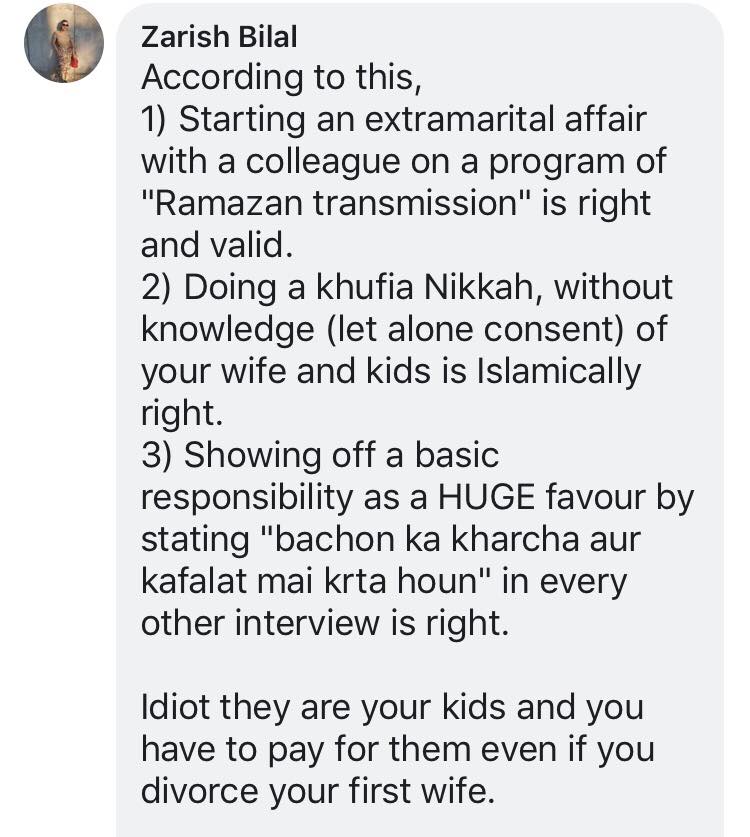 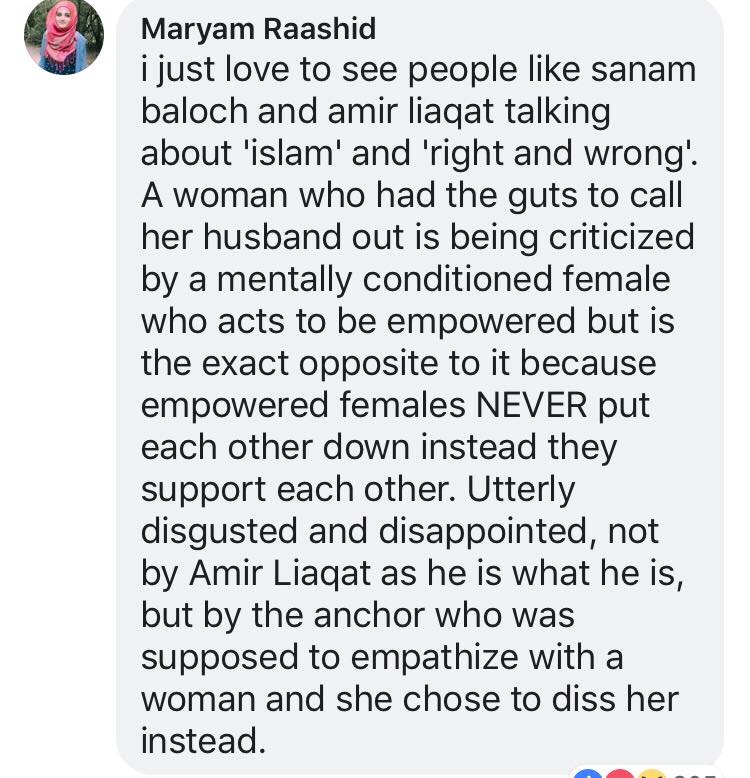 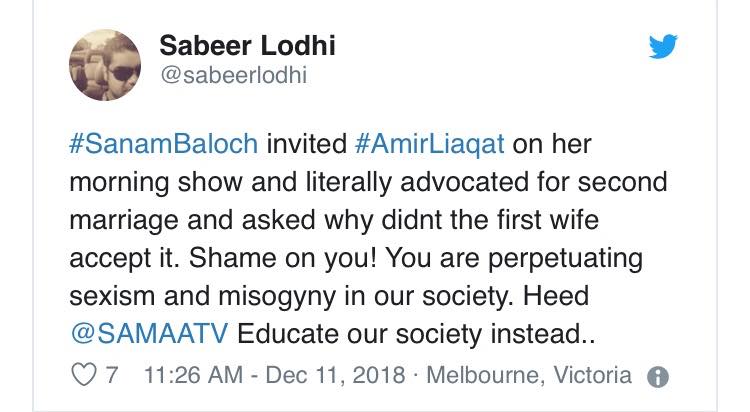 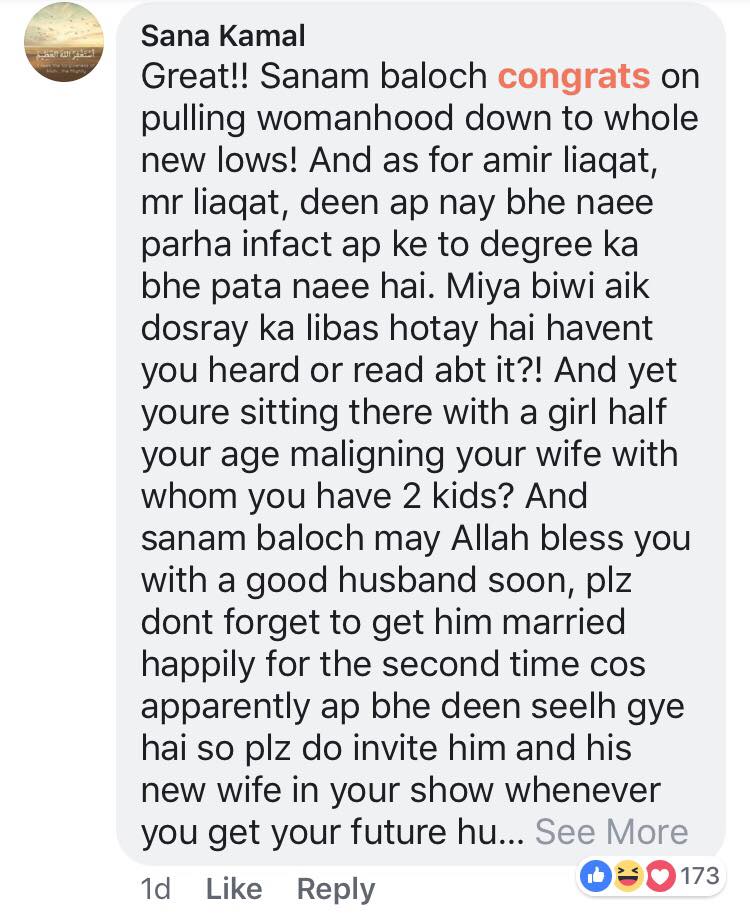 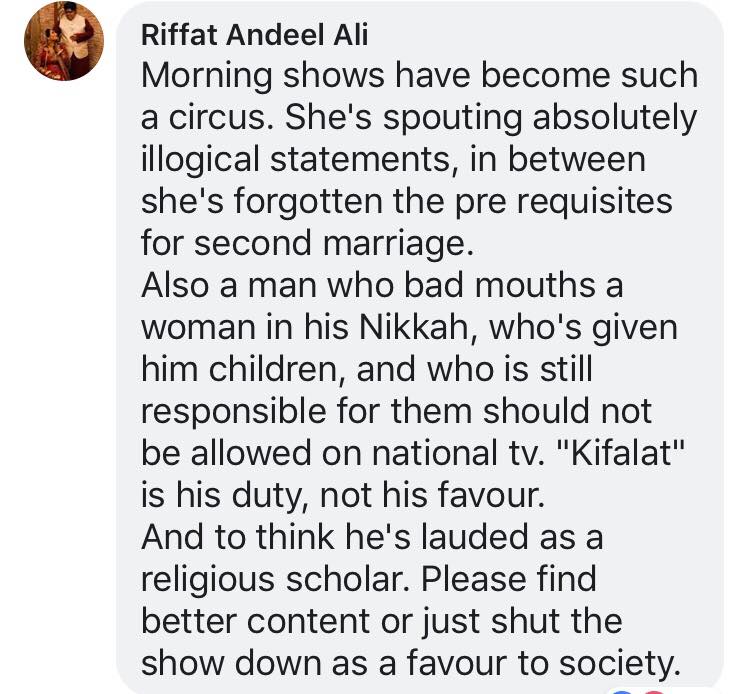 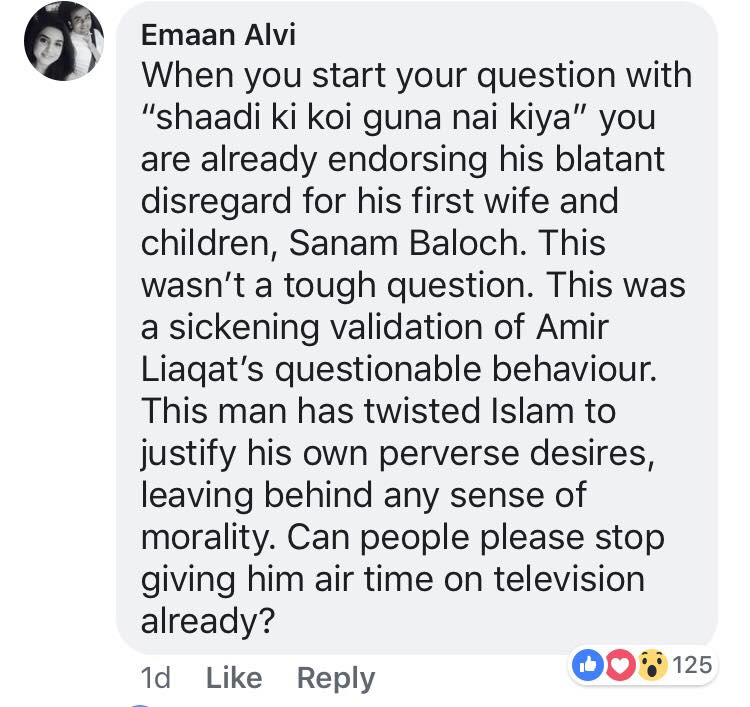 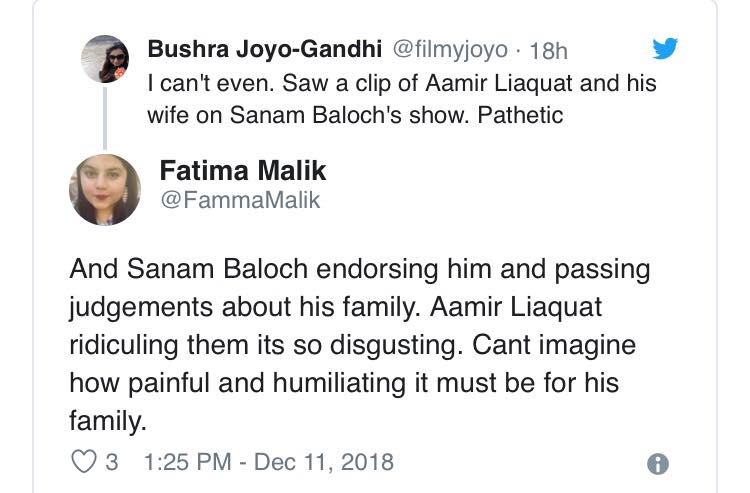 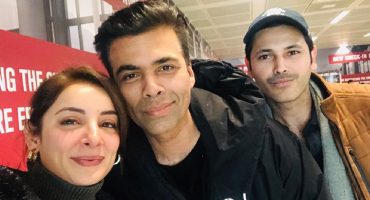