10 Trends That Should Be Banned In Pakistani Dramas Part 2

Pakistani dramas have always been popular because they have depicted realities of life in the most convincing manner. This is the reason why the audience have always found them relatable. The stories of Pakistani dramas resonate with the viewers because of how closer to reality they are. However, in recent years, the rat-race of ratings has prevented the drama writers from exploring more domains. They more or less write the similar stories but set the dynamics and the story differently, which often works to sell a drama.

Pakistani dramas have always done well and hold a special place in the audience hearts. This puts more responsibility upon the drama makers, starting from producers to writers to take their job seriously and to not dwell too much in the hunger for ratings to be churning out similar stories repeatedly. Media plays a huge part in shaping up society, which is why it is one of the most powerful mind-controlling tools. Unfortunately, the drama-makers think by showing these stories they are creating awareness, however it is also having an opposite and negative impact on the society. In the subconscious mind, when seen certain situations repeatedly, viewers become immune to such issues and find nothing wrong in them. Showing reality is one thing but to glorify it time and again is always alarming. There are a lot more subjects that can be explored but these days, most of the writers purely believe in showing limited number of scenarios and do not bring something new to the table. If such trends are banned, the writers will start working on newer ideas.

Let’s take a look at 10 more trends that should be banned in Pakistani dramas:

This trend definitely has to be put an end to in Pakistani dramas. Over the years, the cheating deceptive spouses have garnered quite a lot of popularity among the Pakistani drama viewers because they have gotten used to the idea of an extra marital affair. In the classic dramas, this scenario was never glorified but now the gravity of the issue has been heavily compromised upon because, in the end, the cheating spouse is always forgiven and accepted back. These scenarios do sell the dramas, but they also desensitize the viewers about such a serious issue. 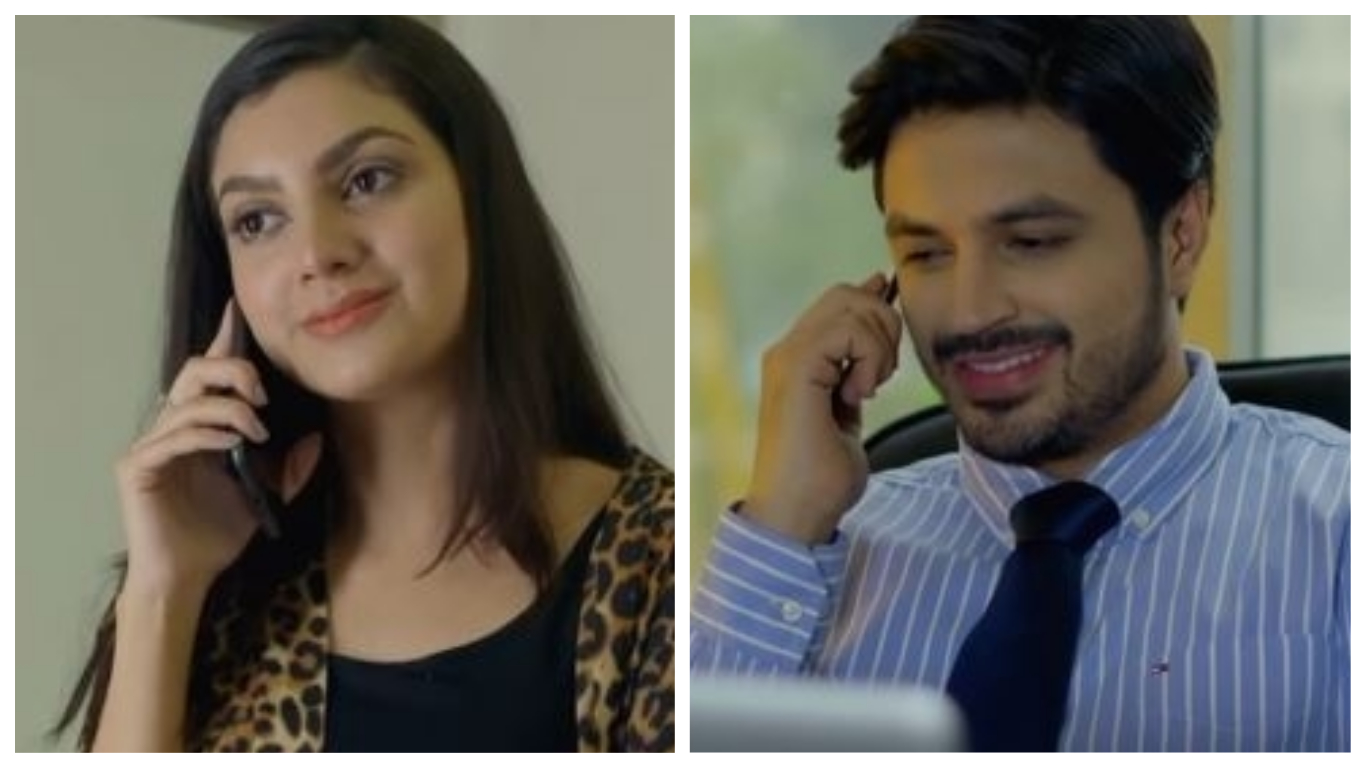 If taken a look at most of the dramas that made it to TV screens of Pakistani audiences, there will be a handful of them which might not have included a divorce. Most of the stories of Pakistani dramas now revolve around divorces and it has come to a point where in every story, if the viewers come across a mismatched couple, the first thing they know is that this couple is not going to stay together and their relationship won’t last. Divorce is a reality for a lot of people in the society but the way our dramas portray it makes it very nominal, taking the attention away from the fact that it is taxing on emotional and mental well-being of those who go through it in real life. In Pakistani dramas, divorce has been reduced to such a normal issue as it it’s as simple as winning or losing a game of Ludo! 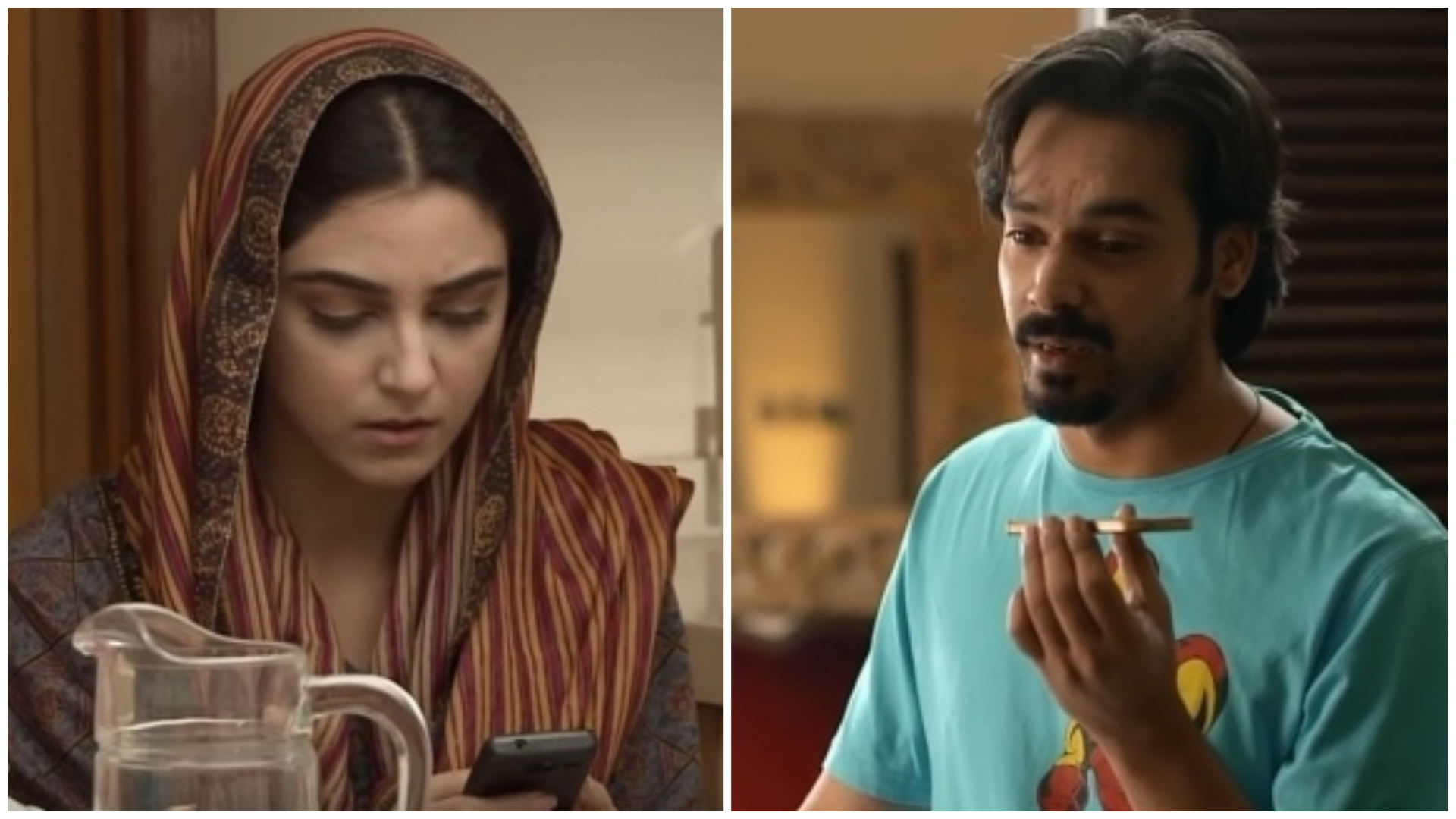 Young Girls Dying To Get Married

This is another trend that should be absolutely banned in Pakistani dramas, where they show that young teenagers are dying to get married and that’s the only goal they have set for themselves in their lives. In those few dramas where the viewers came across such female leads who had everything else on their mind apart from marriage, they made a lot more impact and showed that there’s a lot more to be achieved than a bridal dress before your teenage years are over. In every other drama, there’s a girl dying to get married to the guy who is not into her and probably has behan-zoned her ages ago but they continue to day-dream about them. Also, those who are getting the attention of the boys in the dramas are only seen discussing marriages and making plans with their potential husbands-to-be. Over the recent years, every other drama has included one such character who has nothing else to do than to dream about her wedding with phupho ka beta. It would be such a breath of fresh air seeing female characters who are working hard to educate themselves, pursue their dream job and focusing on their career ahead. 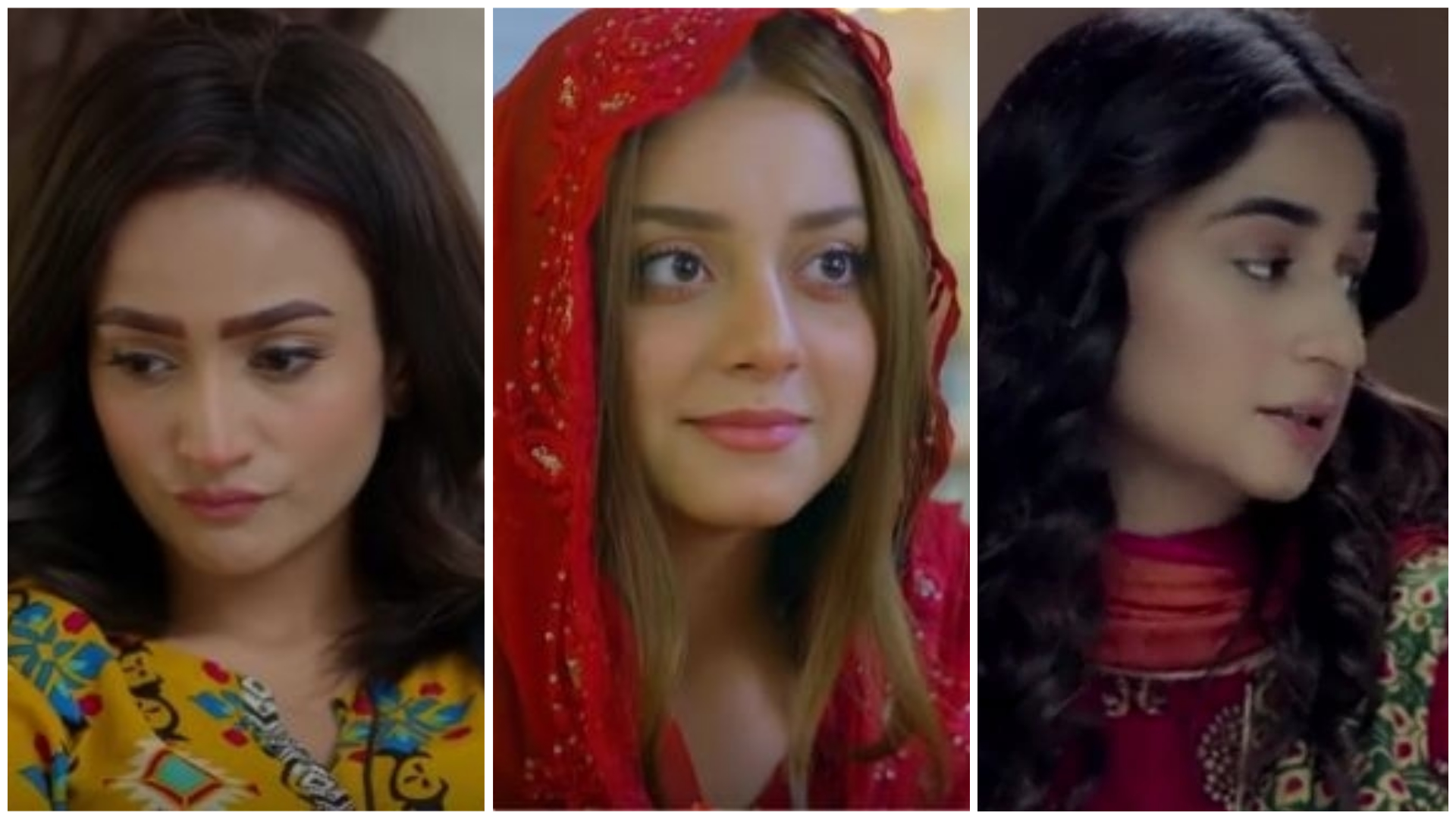 This is yet another trend that makes the viewers’ blood boil. Mothers are one way or the other one of the stronger support systems that children have. They are safety blankets that children can always fall back on. Motherhood not only gives the woman a status of being a mother but it also instills this strength in her with which she protects her child from all sorts of preventable evils surrounding them, however the mothers in Pakistani dramas are quite different. Recently, the viewers have come across such mothers who can’t even complete a sentence in defense of their child, they also go on a mourn-vrat spree and don’t find the courage to call spade a spade. It makes one wonder the reason behind mother’s forced, exaggerated and unrealistic helplessness. It is understandable that mothers can not control the consequences, which might make their helplessness justified but not speaking up when the time is right and calls for their intrusion is very frustrating. 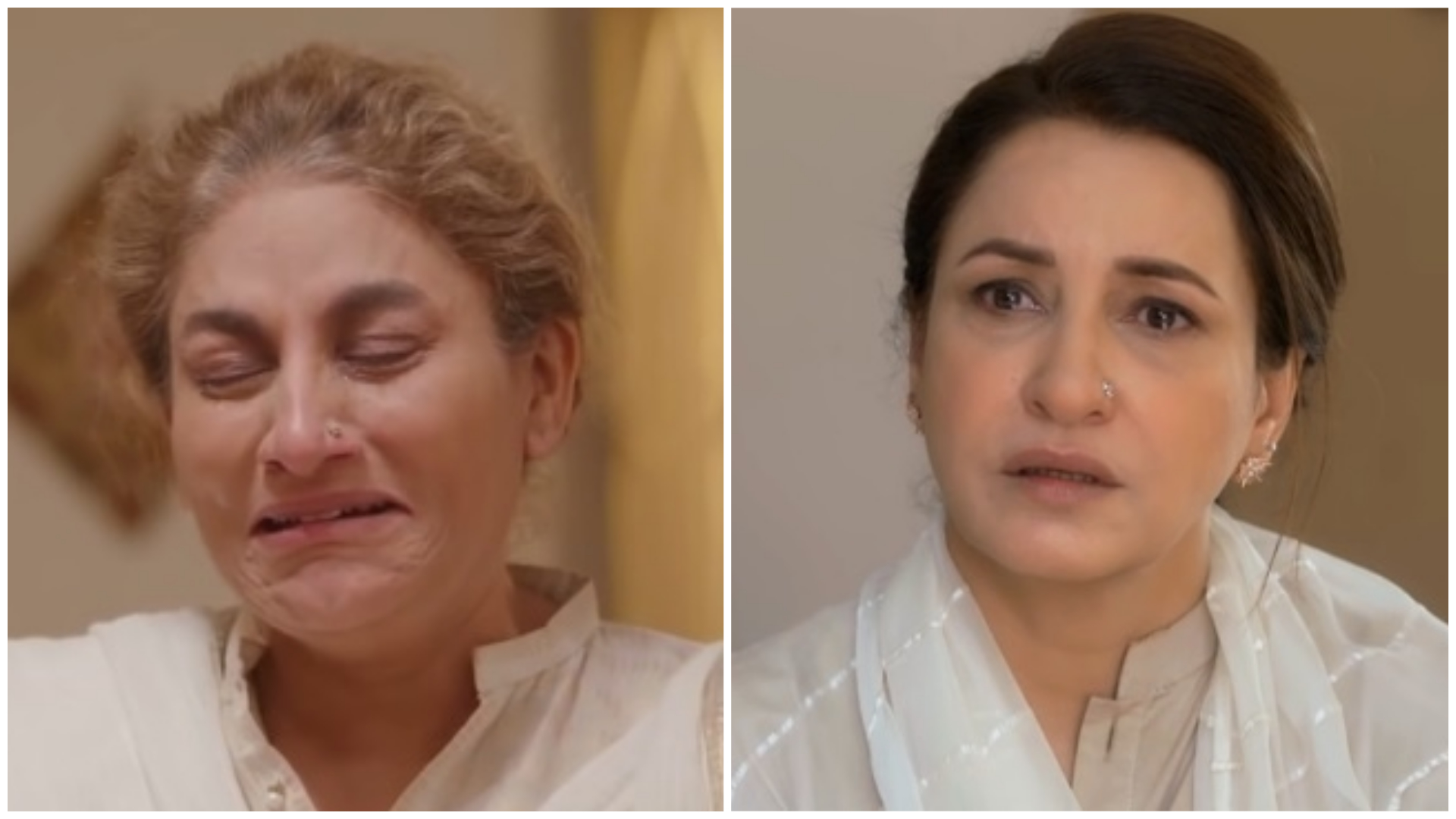 Just by showing a mere ticker of ‘sharab noshi haram hai’ is not enough of a public service message. How about the drama makers ban this trend and do not show it at all. Alcohol might be a reality for certain parts of society but it is never alright to show it just so casually as if it makes one look charming who is relying on alcohol. In quite a lot of dramas the characters are shown to be drinking in order to deal with the stress, which makes one wonder why there was no other option shown than to just rely on alcohol? 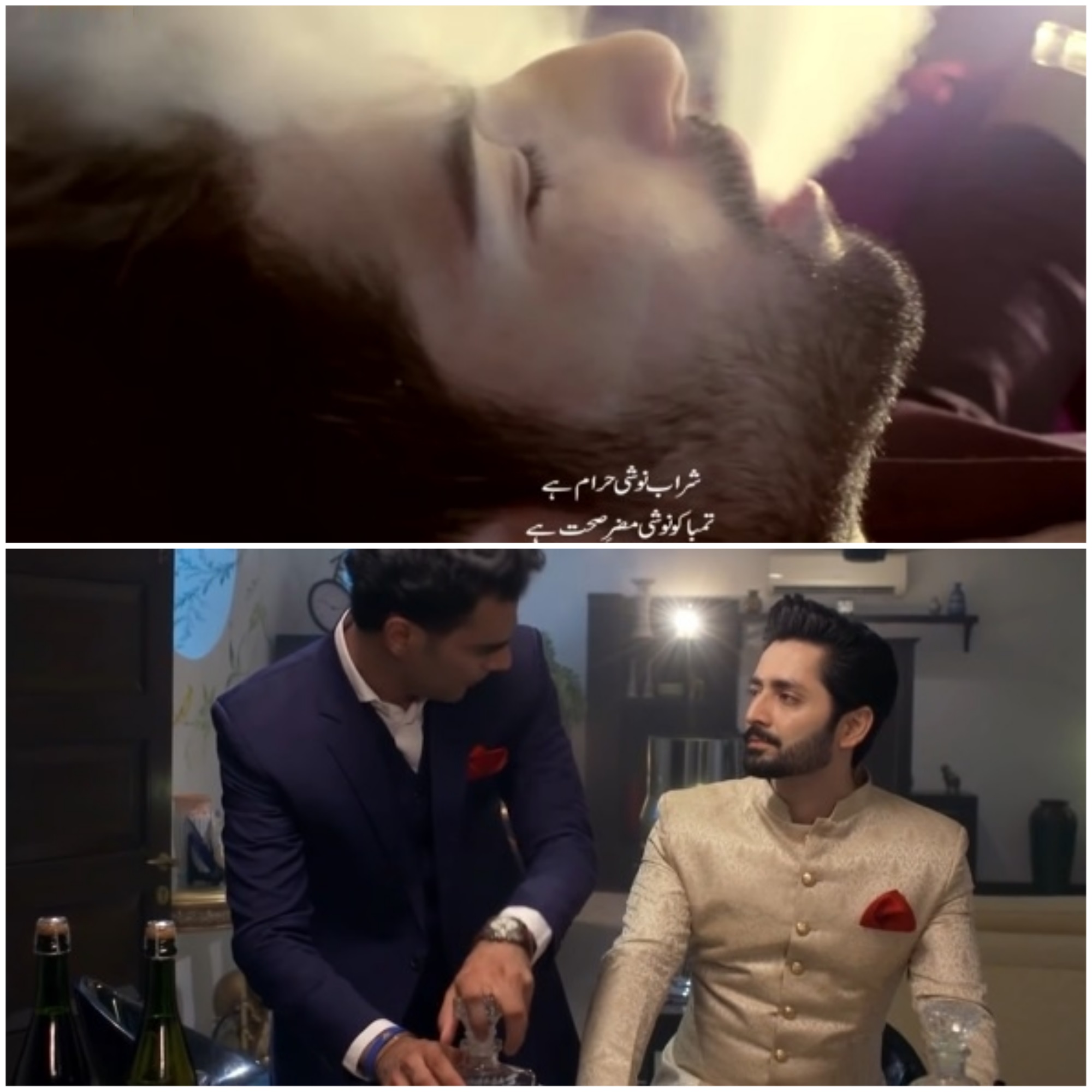 For years and years, the love stories shown in Pakistani dramas have done so well in terms of popularity due to the decency with which they were executed. No physical contact, nothing over the top, no cheesiness, just simple decent romance which conveys the emotions of love and respect between the married characters perfectly. However, this trend has also become quite popular and a lot more actors are becoming quite comfortable with the physical contact which always feels unnecessary and unnatural for a Pakistani drama setting. 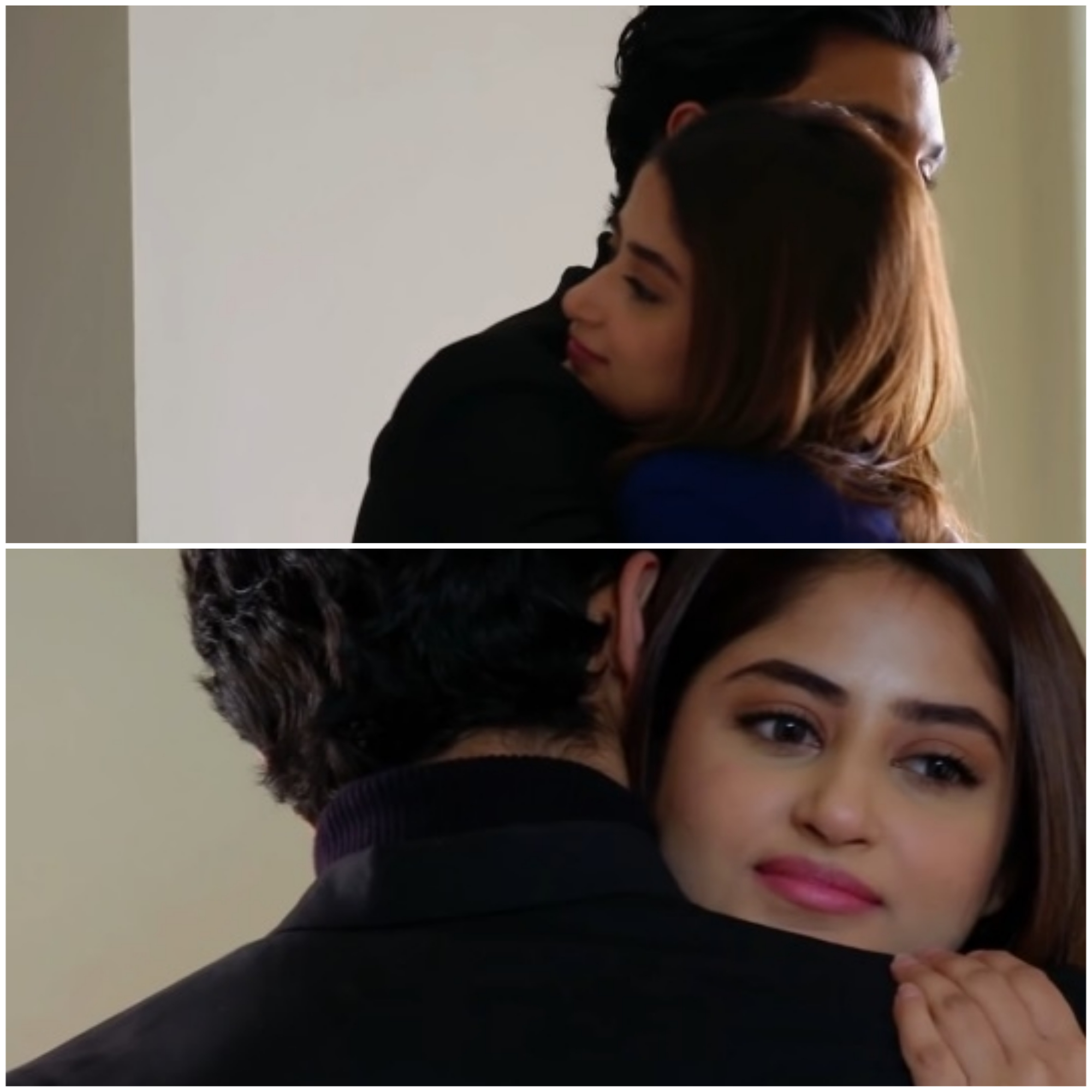 In every other drama these days, there are always a couple of characters who are being forced into marrying someone they are not into. It sets a tone for the rest of the drama and makes the story very predictable because the viewers already know that they will get married forcefully, will be unhappy, make each other’s lives miserable and then get divorced. It is more or less the similar vicious cycle that repeats itself in every other drama but the only difference is of the actors who are playing such roles. Forced marriages should be banned completely. There are some dramas that do show people making their forced marriages work, but the majority of those forced marriages end up on an ugly note and then kind of gives the character an open edge, an allowance to get married to the person they were initially in love with, which is absolutely bizarre. What makes it even more ridiculous is the fact that the parents, who can totally see their children not being happy force their marriage down their throats like a cough syrup, as if it’s a matter of 2 – 3 weeks and not their entire life ahead! 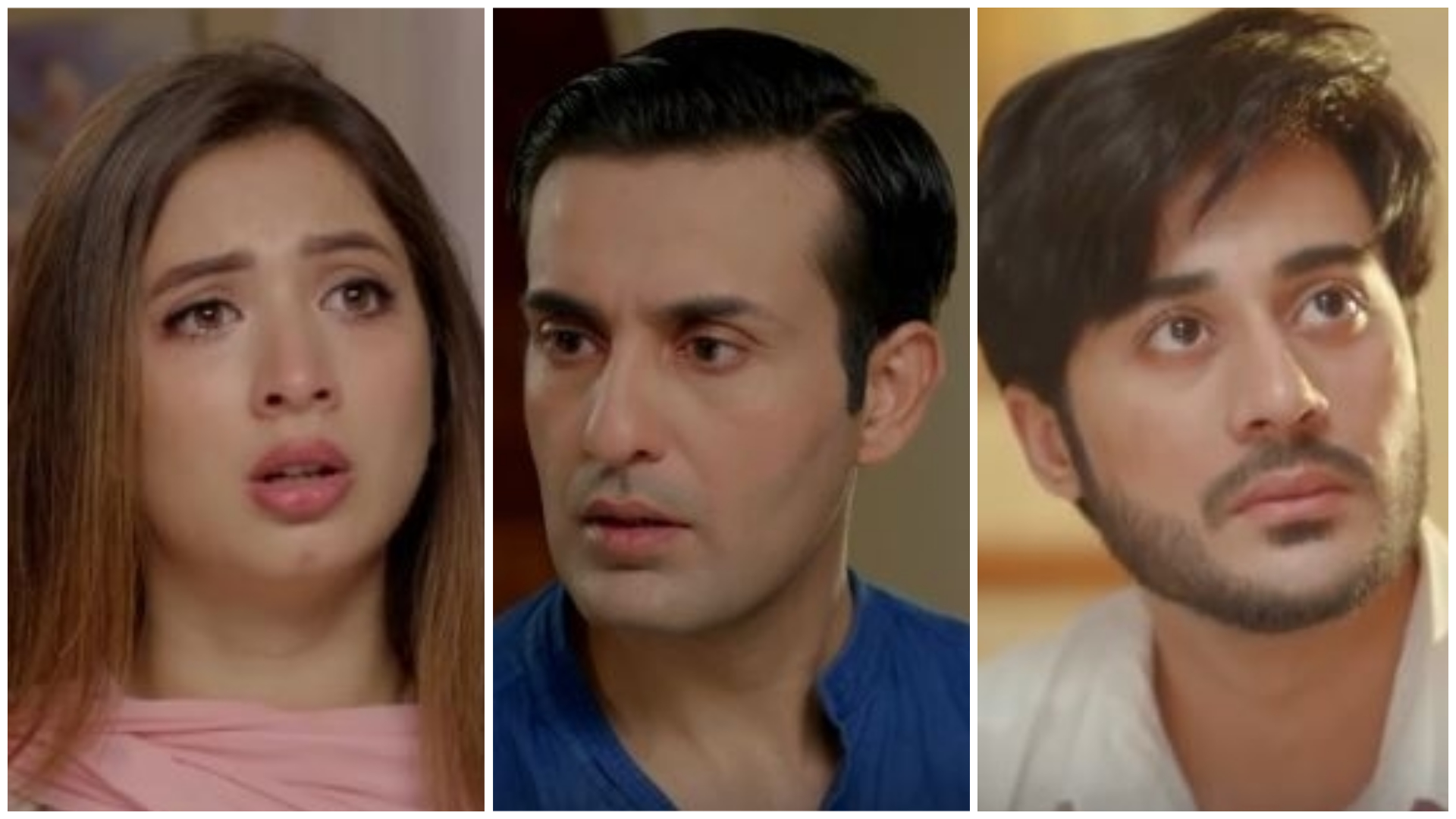 This is one such trend that needs to be banned as soon as possible. This is where the media should play its role even more responsibly and change the usual narrative where the servants are misbehaved with. It ends up being one of the most disgusting things to come across and may be because people are so used to mistreating their house help and not treating them with respect, they do not find it odd while watching the similar behavior on TV as well. If the drama writers, producers and directors are not going to reinforce the fact that servants are humans and they deserve respect too, not sure who will speak up in their favor ever? In all the Pakistani dramas, no honorifics are used for aged servants, which is irksome, condescending and absolutely disrespectful. The younger servants are also not treated well, which is absolutely sickening to see. 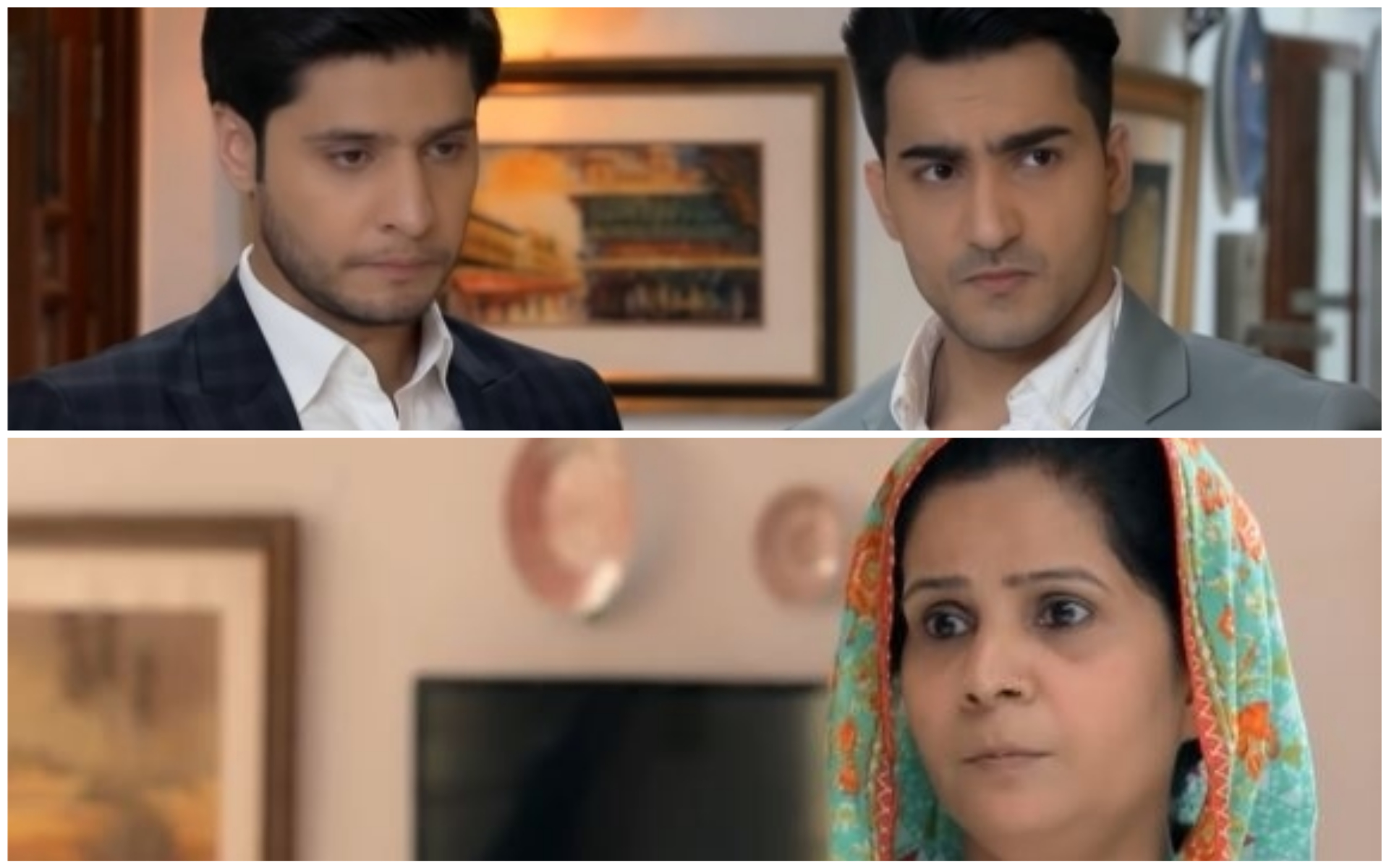 Characters With Psychological Issues Ending Up Dead or Mentally Deranged

Pakistani drama writers have started to explore this genre now, where they are trying to bring attention to psychological issues by writing stories related to such characters. However, these subjects require thorough research but Pakistani drama-makers unfortunately use them for ratings. After they are done, these characters either end up dead or are shown the doors of mental asylum. It is a rarity in Pakistani dramas that a character with psychological issue was shown to be going through a proper psychiatric treatment because it takes time and probably won’t’ bring the ratings that the producers are after. It is very easy to show the problem but showing the solution is the key which goes missing especially when it comes to these characters and their stories. Time to put a ban to it with immediate effect! 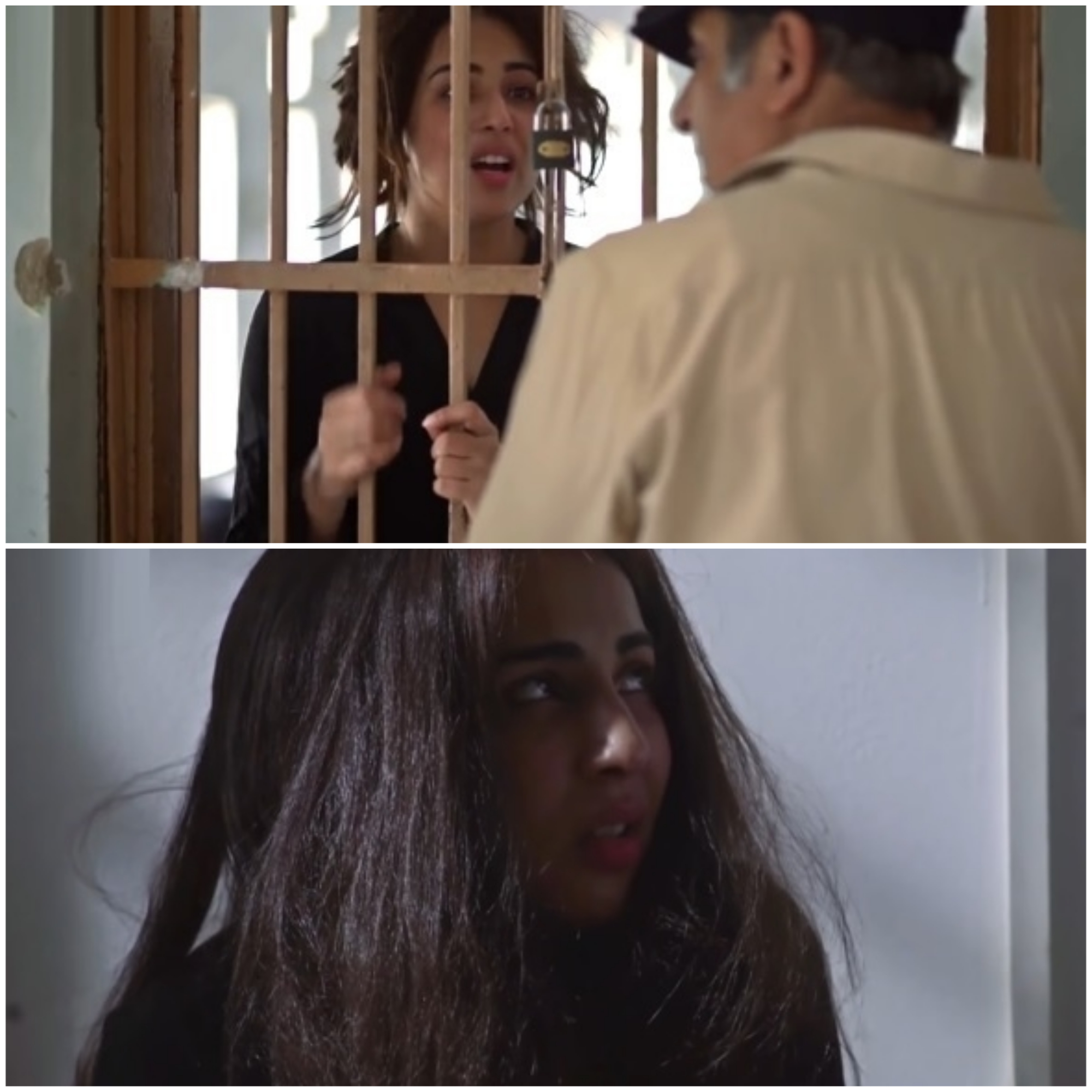 Another narrative which is not only boring, outdated but absolutely frustrating for the viewers. It also makes it sickly amusing that the opening scenes of such dramas always show daughters to be Papa Ki Paris but the moment these girls get married, they become Papa Ki Paapis because Papas start seeing them as the culprit who are unable to make their marriages work. Every single set of parents is shown to be telling their married daughter that they have to survive the marriage no matter how toxic it gets. About time to ban such sets of parents from making an appearance on the TV screens and stop the narrative of tumhara aslee ghar, shohar ka ghar! 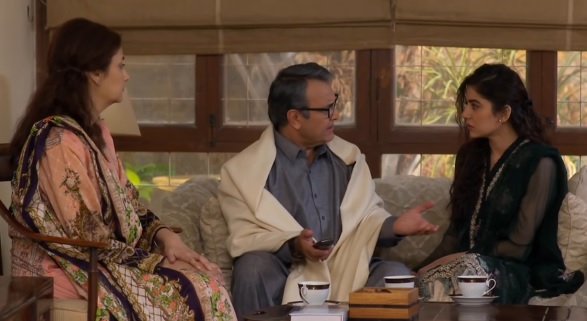