Ahsan And Hania Will Be Seen In A Film

Well, both Ahsan Khan and Hania Aamir have done their respective films since the revival of cinema and both of them have really done well. Now, we will see the stars together along with another exciting cast and the film will be produced by the MD Productions.

Ahsan Khan and Hania Aamir will also be joined by Kubra Khan, Azan Sami Khan, Shamoon Abbasi, Javed Sheikh and Shafqat Cheema in the cast. The stars are all doing quite well individually too as Ahsan is a part of Aangan and another upcoming huge project Alif while Hania Aamir is starring in Anaa and Kubra Khan too will be a part of Meray Paas Tum Ho and Alif. 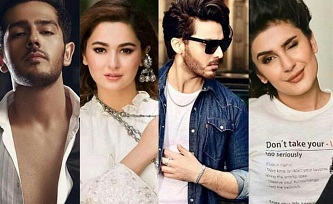 The film is titled as Patakh De and will be apparently a 2019 release. Let’s see which genre this one will be after more information comes out!