Nabeel Qureshi is a Pakistani film director, screenwriter and occasional singer best known for making movies that tackle socio economic issues in a thought provoking yet light hearted manner. Nabeel uses a unique style incorporated in his realistic stories, which in turn has gained a lot of critical acclaim.

Nabeel and Fizza have co-written an upcoming film and according to recent reports, Quaid e Azam Zindabad that follows the story of a notorious cop will feature Fahad Mustafa as the protagonist and Mahira Khan opposite him.

Quaid e Azam Zindabad is said to be an action-comedy with lots of twists and turns and quick-witted humour.

The movie can go way beyond just paying tribute to the founder of the nation. As with Nabeel Qureshi and Fahad Mustafa coming together, there is always a message hidden in between lots of comedy. 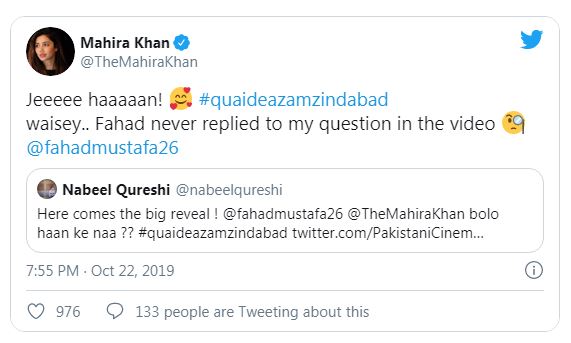 So, we can only wait to see till they start revealing more about the movie through more of their promotional stunts.

We wish the entire team of Quaid-e-Azam Zindabad the best of luck. We hope the movie can hit our dry cinema halls with a bang soon!

Sharmeen Obaid Chinoy Says Nicotine Is Dangerous For Every Age

Sarah Khan Fixed The Netizen Who Tried to School Her

Hasnain Lehri Dedicates His Award To His Late Brother