Where is freedom of speech?

The Bollywood actress, Priyanka Chopra took to her Instagram to praise Indian Air Force for the claimed attack in Pakistan.

Many people called her out for promoting  war after being the Goodwill Ambassador of UNICEF. Pakistani celebrities stood against her and one of them was Armeena khan. She tweeted:

WHAT?!!! But aren’t you supposed to be a Good Will ambassador for @UNICEF? Screen shot this everyone and next time she speaks up for peace and goodwill. Let’s remind her of this hypocrisy. https://t.co/Jew88bMtYv

Armeena also posted series of tweets where she called out Bollywood stars for promoting war.

I’m watching SOME of these “Bollywood” accounts in dismay, glorifying war (people should take note) In the future, these particular individuals shouldn’t be allowed to preach peace to the world. Artists are supposed to be sane, pacifying voices. 🤷🏻‍♀️ #theinternetneverforgets

“It is easy to advocate peace whilst the sun shines. When the storm rages, it is then your character, principles & values are tested. Will you turn your face into the wind and stand by what is right or will history find you wanting?” – Me #peace #saynotowar ❤️🤘🏻

Lets have a look at her statement: 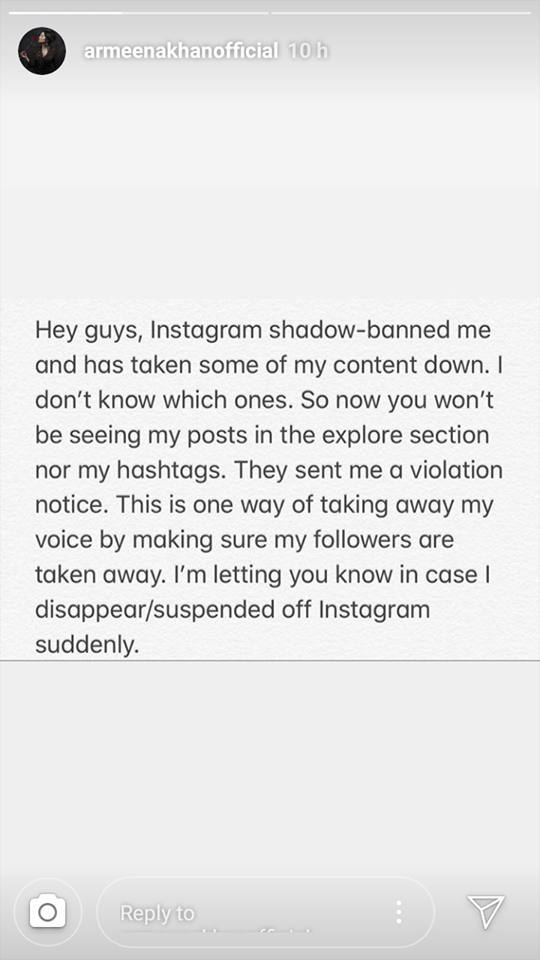 This is an alarming situation. In this modern world, where is freedom of speech? Is this how you stop people from sharing their opinion?
This act of Instagram shows there is no freedom of speech and speaking against the war will get you banned.

Armeena has made us proud by calling out such war mongers. You go, girl!