Bollywood filmmakers were known for notoriously ripping off posters and action sequences from Hollywood movies until they discovered that Pakistani songs and music videos are equally convenient to steal too. There are many compositions by Nusrat Fateh Ali Khan and Malika-e-Tarannum Noor Jehan that have been cleverly reprised in Bollywood. The most recent example is Coca Cola that was used to beef up jingoistic sentiments in an “anti-Pakistan” film, Bhuj. 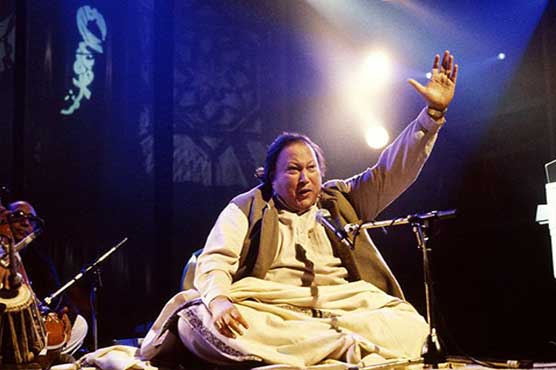 Singer Jubin Nautiyal seems to be so taken with Nusrat Fateh’s music that it is hard to find originality in any of his recent releases. His version of ‘Ankh Uthi Mohabbat’ has crossed one billion views on YouTube. He enjoyed immense success by ripping off another popular qawwali ‘Dil Ghalti Kar Betha Hai’ in September, and his latest release ‘Meri Zindagi Hai Tu’, is not original either. It was a ghazal titled ‘Meri Zindagi Hai Tu’ by poet Nasir Kazmi, performed by Nusrat Fateh.

‘Meri Zindagi Hai Tu’, featuring John Abraham and Divya Khosla Kumar in the video, premiered on October 29 on YouTube and has since amassed nine million views. Nusrat Fateh’s fans are protesting on social media by sharing the original qawwali which, according to them, has been “destroyed by Bollywood”, have a look!

Before t-series and bhushan kumar destroy it with their shitty remake, bless the timline with the evergreen original from the maestro himself!

jubin nautiyal is such a bad singer and then has the AUDACITY to remake NFAK’s songs. sit down.

Had to listen to the original Ghum Hai Ya Khushi Hai Tu by NFAK thrice, so that I could un-listen the terribly composed Meri Zindagi Hai Tu from Satyameva Jayate 2 🤢