Popularity of Indian Bollwyood’s films in Pakistan is beyond any comparison especially when it is full of star cast. Regardless of the political situation with neighboring India, Indian Bollywood films always perform well in Pakistan.

As per press reports the advance booking of both the films is quite high especially Dilwale has a clear edge over Bajirao Mastani. Only in once city Karachi even before its release Dilwale has earned 20 lakh (200,000) rupees in advance bookings. Seeing this trend at few places the distributors of Dilwale have increased the ticket prices as well.

The star cast of Dilwale has also appeared in multiple morning shows on different Pakistani television channels to promote the film like on Hum Tv, Hum Sitaray and Dunya Tv.

From past three four years Bollywood films released in the month of December earn huge revenues on Pakistani box office. In 2013 December, Bollywood’s Dhoom 3 earend around 25 crore and became the highest earning film ever on Pakistani box office (The record is later broken by Fast and Furious 7 and Jawani Phir Nahin Aani in 2015). In December 2014, another Bollywood film Piku also earned 23 crore in Pakistan. Seeing past trend these two films are also expected to perform well especially Dilwale. 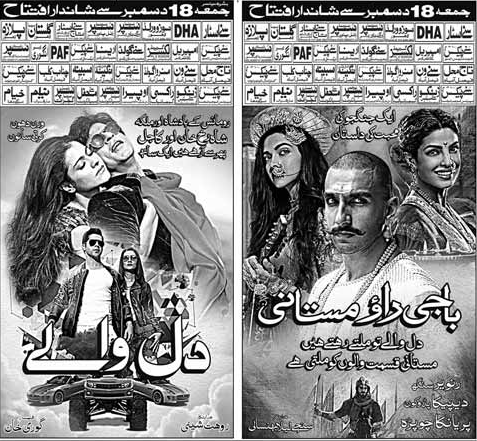