Boxer Amir Khan can Lose Half his Fortune in Divorce Case!

Following up with the Kardashian drama is easier than following up the Amir-Faryal drama. These two are quite a pair, to say the least. From the public break up to hopes of a patch up to a final goodbye to having a second baby on the way, they have kept everyone on their toes but honestly speaking, they just lost respect of themselves in the public eye because of it all. But the silver lining is that they did remind us the importance of private conversations, and privacy. It’s however sad that these two still have to learn how to dial each other’s private phone number. 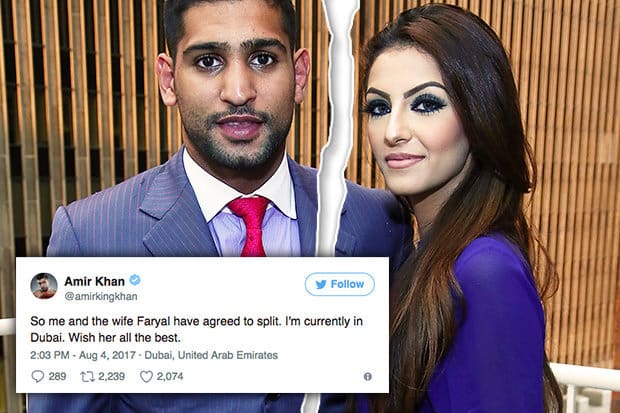 Anyway, now that the talks of divorce between the couple are in the air, we are here to inform you that Amir Khan can lose half of his entire fortune in the divorce case. Faryal will be getting half of his £25 million fortune!

His lawyers might argue that his cash is tied up in family businesses and investments but that will make no difference apart from to draw the process out.

He will be told to break-up any firms and sell any investments to make sure he can pay the money into court.

Furthermore, Amir could lose the custody of his daughter and the unborn child.