After introducing the resolution guaranteeing royalties for artists in parliament, Senator Faisal Javed Khan recently took to Twitter to announce that it had been passed unanimously by the Senate. Faisal wrote in a tweet alongside an article announcing his intention of introducing the resolution, “Congratulations, as the resolution has been passed by the Senate Pakistan unanimously today. Appreciate the support from all the members of the house.” Royalties are payments made to artists when a project that they have worked on gets a re-run or reused in any way.

Congratulations as the resolution has been passed by the @SenatePakistan unanimously today. Appreciate the support from all the members of the house. #RoyaltiesForArtists https://t.co/VuP00p0wHC

Right after the news went viral on social media, Several industry members took to their social media accounts to laud Khan’s efforts and congratulate fellow artists. Senator Khan has won a place in Pakistan’s celebrities’ hearts and they’re all praising him for his efforts on their behalf, have a look!

BRILLIANT effort @FaisalJavedKhan Thank YOU and Best of luck for the Second and Step.#RoyaltiesForartists https://t.co/ceFtttmxcG

Something that should have been done many many years ago…but finally happening…thank you for doing this…hope many artists will benefit from this and when they most need support they could tap into this. Great news. https://t.co/gBO7d0KJYg

Congratulations to TV/Film fraternity @SenatePakistan has unanimously passed resolution with the objective to empower Copyright Board to fix royalties for licensing and assignment of work and ensure payments to artists. Thank u members of the house #RoyaltiesForArtists pic.twitter.com/S1O57FFuyg

Finally! It was due since a long time. Our artists deserve security and due recognition of their work. #RoyaltyBill

This could be a true paradigm shift, a gae changer and a massive boost to the Culture-Related industries! I have yet to BELIEVE it. It's such a great news! #RoyalrtiesForArtists https://t.co/smGLP90Rnk

More power to you @FaisalJavedKhan for raising a crucial arts & culture concern for reform. More needs to be done , especially due to the devastating effects of #COVID19 on #Artists in 🇵🇰 https://t.co/WJ6cQJevmO 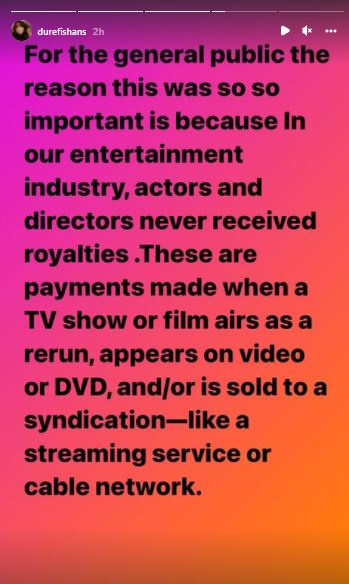