“Ek Thi Marium” To Be Released in Cinepax Cinemas Across Pakistan !

For all the fans of Sanam Baloch and her latest Television Film “Ek Thi Marium” here is the good news. The Paragon Productions have collaborated with Cinepax Cinemas to bring an Urdu1 Pictures telefilm “EK Thi Marium” on the silver screen by releasing it nationwide on the 21st October 2016.

As already known that Ek Thi Marium, is a Pakistani biographical television film which is based on the first female fighter pilot Shaheed Marium Mukhtar and was aired on Urdu 1 for the very first time on Defense Day on television. 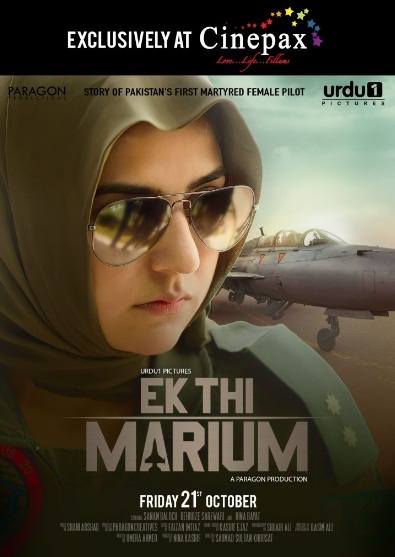 The main lead role in the film has been played by Sanam Baloch,the roles of Marium’s parents have been played by Hina Khawaja Bayat and Behroze Subzwari . The producer of telefilm is Nina Kashif and director is Sarmad Sultan Khoosat, and the writer is none other than Umera Ahmad.

Regarding the film the producer Nina Kashif said, “It’s just not a story of a real hero but the movie outlines a strong, positive message about parents who have confidence in their daughters and allow them to grow as strong individuals who are capable of achieving something big in life, of doing something extraordinary”.

The General Manager of Cinepax said “This initiative to bring Ek Thi Marium in theaters is an important step towards educating the society for letting women pursue their dreams and break social barriers, Cinepax”.

So guys let us go and watch this amazing film in theaters from 21st October.