Hina Dilpazeer makes her Directorial Debut on TV One!

The talented actress Hina Dilpazeer has now made her Directorial debut by directing a play for Eid-ul-azha titled as Gudguddi. According to Hina directing this play seems to be a very great move. Hina has already done very diverse roles and her work truly speaks for her. She is extremely talented and knows how to work in front of the camera. Let’s see how she has done work behind the cameras.

According to sources Hina said, “It’s not an easy decision to take a plunge in direction but the team at TV One helped me a lot in this process – especially Seema Tahir Khan and Ishrat Sohail support have been phenomenal.”

Regarding the story of the drama Hina said it’s not about qurbani but we have tried to send a strong message to the audience that how important are relationships in our life. Apart from directing this play , Hina has also acted in the drama and has done the role of Dolly Phuppo.

The drama is written by Alina Farooqui, the casts of the drama include Amna Malik, Rashid Farooqui, Salman, Basit Faryed and child star Samar. The play will be aired on Day One and Day Two of Eid on TV One. 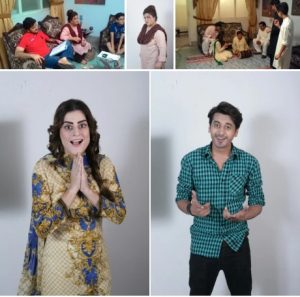 We wish Hina and her team a very best of luck!