Mahira is always in a hurry. And she’s in a characteristic state of rush as she walks in for this interview, radiant in a white cotton kurta, gorgeous in an unaware state of unkempt attraction. It’s the look of a woman who has too much to do, with little time to do anything more than pull back her hair and leave the house with nothing fancier than a washed face. But what a face it is! Mahira is a head-turner, evoking both envy and desire of women and men who either want to be like her. Or simply want to be with her. And she’s blissfully unaffected by both.

A million dollar smile warms up her hazel eyes as she sees me. And she holds up her hands to show ten fingernails that are painted red and blue. Spiderman. It’s her son’s birthday and she spent the morning entertaining his friends in a superhero themed party. That, she quickly explains, is the reason for being fifteen minutes late. I can imagine anyone would happily wait a lot longer for this one.

Bollywood, I get straight to the point. Is there a fire where this smoke’s coming from?

“It’s not true at all,” she replies, settling down with a cup of coffee and bringing on that slow, reinforcing tone that would make it impossible to misunderstand what she’s saying. “I am not doing a film with Ranveer Singh. This smoke has no fire at all. I’m not even in talks with Bollywood, not really. I mean I’ve gotten calls, some from very reputed directors, but I’m in talks with no body for a film.”

It’s been two years since Humsafar catapulted her to the pinnacle of popularity. But while her co-star Fawad Khan has made a lot of hay under the proverbial shining sun, she’s barely cashed in on that wave of hysteria. One television play (Shehr-e-Zaat) and one talk show (The Lighter Side of Life) is what she has to show in her post Humsafar trajectory. If there were offers from Bollywood then what has stopped her from taking the next step forward?

“I think that they (Indian filmmakers) have only seen Humsafar in fact even Humsafar hasn’t played in India yet,” she offers an explanation. “They haven’t seen enough of my work to present something solid to me. If I work in India I want it to be for the same caliber of work that I get in Pakistan. I don’t want to change my standards.”

Are you afraid of stardom, I ask her a question that frequently crosses the mind of anyone who knows her?

“Maybe,” she agrees with a sheepish laugh. “The thing is that right now this is it. They say these are the stars of Pakistan and if this is it then I feel that isn’t so bad. I’ve managed to guard myself and give as much as I want to and hold back as much as I want to. But yes, Bollywood is scary. It is unchartered territory. You don’t know what you are getting into. That said, Bollywood is scary but not so scary that I wouldn’t try.

“The way I see it,” she continues, “is if I’m choosy in my own country and if I’m picky then I’m going to be as picky in Bollywood. I’m going to look at a script as minutely as I do in Pakistan. Why should Bollywood or Hollywood or Turkey be any different? I don’t understand that. I don’t work like that. People tell me that it’s career suicide. They say, which actress gets fame and then decides to do one project a year. Who does this? I do it. The way I see it, if I can ask a close friend in Pakistan to read his script (referring to Asim Raza’s film) then I would also ask the same of a big director in India. ”

Whether in India or Pakistan, the only path Mahira wanted to follow was the one that lead her to the silver screen, which is why she signed up for Bin Roye immediately after Humsafar and Shehr-e-Zaat. Bin Roye, Hum TV’s first feature film in the making, was supposed to cast Mahira opposite Fawad Khan but unfortunate delays in filming lost Fawad to Bollywood. Humayun Saeed stepped in as her hero.

There are rumours of Humayun Saeed’s wife being the scariest part of working opposite him. Was Mahira intimidated, I ask her cautiously?

“Not one bit,” Mahira replies with a smile. “I understand that this is a tricky place to be in, whether it’s my significant other or someone else’s; they will feel insecure. I get that. But there are levels of insecurity. And this is my job. I can’t be worried about what someone’s wife thinks. I have to work and I will make sure that I don’t do anything that makes her or anyone feel insecure.” 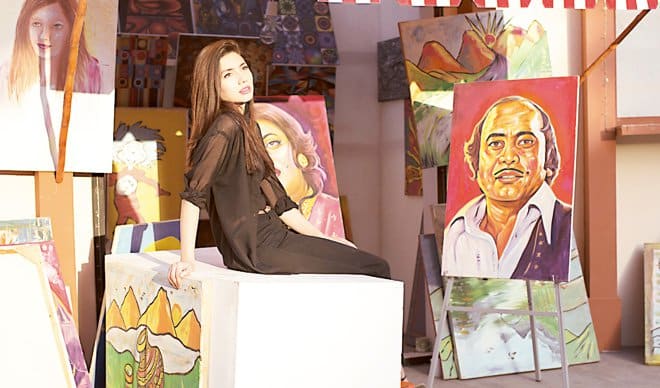 You’ve said no to so many films, why did you agree to Bin Roye?

“Bin Roye was offered to me right after Humsafar and Fawad was meant to do it. But he went on to do Khoobsurat. I had a choice and I decided that right now this is the best thing I could do. I liked the story. It had this one scene that kept me awake at night and drove me insane and I couldn’t not say yes.”

Slated for a January 9 release, there’s very little information about the Hum TV film except for the fact that it features Humayun Saeed, Armeena Rana Khan, Zeba Bakhtiar and Javed Sheikh alongside Mahira on the cast. Also that it’s been filiming for two years now and has even seen a change of guard in the director’s seat.

Does Bin Roye run the risk of looking more like a tele-drama than a feature film?

“It’s a full blown feature film,” Mahira replies, without revealing any details. “I love commercial cinema. I like watching a Ram Leela. I like my dance and song. And I have danced in Bin Roye,” she gives her fans something to watch out for.  “I’ve given Bin Roye everything and I’m hoping that people enjoy something different coming from Pakistani cinema.”

But the film is also being turned into a drama serial?

“Yes,” Mahira sighs. “Drama makes channels more money. Every channel wants to sign a deal for two dramas and a film. Bin Roye was supposed to be a drama and then was turned into a film. First the film will release and then consequently the drama will release. It’s a business idea that they want to try out, though personally as an actor it’s not something I enjoy. I’ve given this film my blood, sweat and tears. We often joke that this film is a Titanic, a Mughal e Azam; we’ve been making it forever.” And let’s hope it’s just as successful.

Speaking of films in her kitty, Mahira talks about her next project: Asim Raza’s film, which she has also signed on. Starring Sheheryar Munnawar and Adeel Hussain, it’s a contemporary, coming of age story of two friends. Currently untitled, they’ve only just started readings and rehearsals but it is for this film that Mahira had to refuse the movie Shaan is writing and producing in collaboration with Shiny Toy Guns.

“I could have done both but I wasn’t comfortable with that,” she explains the reason for her choice. “There are certain things that I will not compromise upon. If it’s my friend’s shaadi then my dates are gone to my friend’s shaadi. If I’ve committed to one project, that too of a friend’s, then I won’t pull out of it, no matter what comes along. It’s just who I am. It’s about my priorities.”

Female actors have made very little impact in Pakistani cinema. Do you think you’ll make a difference?

“That’s the idea,” Mahira says. “I’m very aware of the choices I make. I think about my roles and how I perform them.”

Is there any one female actor in the world that she idealizes?

Speaking of roles in drama, cinema and her professional life the conversation steers into more personal territory. The one dominant role in her life is mother to the young and adorable Azlan. And rumours of her estrangement to her husband are often the topic of much speculation.

How has stardom affected your personal life, I ask carefully, knowing it’s an uncomfortable space. But there’s too much speculation to ignore.

“I’ll tell you what stardom did,” Mahira reminisces, with a faraway look clouding her eyes. “Anything that was bad became worse, the cracks became deeper. Being in people’s eyes takes a toll. Even people close to you, those who love you, start seeing you in a different light, in the eyes of the audience. I might be fooling myself that stardom doesn’t play a part. I haven’t figured it all out yet. But yes, as my professional life was soaring, my personal was crashing.

“I actually don’t want to talk about it,” she continues after a pause. “I think I’m the most critisized and the most loved actress in the country. I can’t figure that out. But I want to leave Ali, Azlan, my mother and my father out of this. I don’t want to drag them in it. What I can say that even today, I enjoy a great relationship with Ali. It’s pretty cool that way. We haven’t called it a day yet and I’m happy that our parents are on the same page. I have more clarity now and I think everything will open up. But I don’t want to talk about something that is so personal. There won’t be a single person who will understand because they’re not you. So why bother? I’m already putting my soul out there in my characters. Putting my personal life out there is something I can’t do.”

Back to her comfort zone, Mahira lights up as she talks about Sadqay Tumhare, her upcoming serial opposite Adnan Malik, which is ready to air. Written by Khalil ur Rehman Qamar, the story casts her in the avatar of a village beauty, a role that her fans will undoubtedly love her in.

“I read the script and flipped over it and decided to do it,” she enthuses. “I have not enjoyed saying my dialogues as much as I have in ST. My leading man is Adnan Malik. The cast is fabulous and it was just like fresh air. It’s so interesting for me to play that girl. I hope people enjoy the dialogue and the script because it’s not your usual saga.” 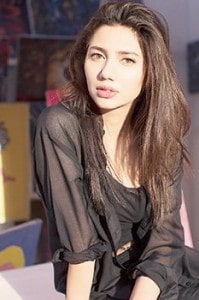 Mahira is not your usual star. She shies from exposure, she is unsure of her sex appeal. She likes to keep things simple and she prefers to keep complications out of the public eye. A loyal friend, doting mother and passionate performer, it’s no wonder that she’s everyone’s favourite.

Mahira’s portraits by Nadir Firoz Khan on location, during the filming of Bin Roye