Iqra Aziz’s wedding to Yasir Hussain has made the ending of the year 2019 special and meaningful for their fans and well wishers. Iqra Aziz and Yasir Hussain’s couple is not only famous but has always been in the limelight. This is the reason why the news of their wedding sparked another level of attention towards their way and people could not stop talking about their sacred union.

Iqra Aziz and Yasir Hussain had two functions, a mehndi and a Nikkah. Iqra Aziz and Yasir Hussain’s mehndi function was a star studded affair which they held at their place and invited their friends to spend quality time with them on their special day. Iqra Aziz looked absolutely radiant and gorgeous as a mehndi bride, which made people wait for her Nikkah pictures keenly as well because they knew she is going to make a beautiful bride and yes, it is true.

Iqra Aziz has always been known for her laid-back and casual chic styling but who would’ve thought that she always dreamt of becoming a traditional bride, embracing all the ethnic charms and traditions of a Pakistani bride on both her mehndi and Nikkah days. Iqra Aziz made a beautiful bride and she once again opted for a traditional route with a beautiful red bridal dress and heavy gorgeous jewellery.

Here are some of the details about Iqra Aziz’s Nikah Dress and Makeup Look:

Iqra Aziz chose celebrity makeup artist Waqar Hussain for her big day and let’s just say, her choice right. Waqar Hussain turned Iqra Aziz into a gorgeous bride while letting her natural beauty shine through. Iqra has always been known for minimal makeup looks which enhance and accentuate her features in such a way that she looks like an absolute best version of herself and this is what her bridal makeup look was all about as well. Her nikkah makeup look is all about fresh matte finish foundation and warm toned makeup. The makeup artist has given her a very natural looking eye makeup which accentuates her eye shape and adds some depth by enhancing her crease with browns. It is worth appreciating that Waqar Hussain has shown how a simple and minimum makeup look can also make a bride look gorgeous. Her eye makeup look is all about golden shades and some tinge of browns. Her brow bone has also been highlighted with golden shimmery shade. The same kind of shade has been applied on her eyelid and the crease has been accentuated with the help of brown eyeshadow. She is wearing a defined eyeliner with a small yet visible wing which elongates her eyes beautifully. The entire eye makeup look is simple, clean and beautiful. The thing which makes this eyelook a lot more special is the choice of false lashes which is fluttery and opens up her eyes a lot more. Her under eyes have also been enhanced with the help of brown eyeshadow. Iqra Aziz’s waterline has also been lined with kajal pencil but it has been kept to a minimum only to bring some definition to the eyes. Iqra Aziz is also wearing brown cosmetic lenses which allow her entire makeup to tie together as well as making her eyes pop a lot more.

The rest of her face makeup is matte and fresh. She has subtle highlighting happening on the highest points of her face like her cheekbones as well as in the middle of her forehead. Waqar Hussain has not done harsh contouring or bronzing, this is the reason why Iqra looks quite youthful and fresh. The choice of lipstick is absolutely amazing because this is not the usual shade that we get to see on the brides. Iqra Aziz and Yasir Hussain had their Nikkah ceremony in the day, therefore the makeup artist had to keep that in mind and give her the makeup look which should have been daytime appropriate. Waqar has defined Iqra’s lips but lining them with dark pink lip liner and he has filled them in with a beautiful nude shade. Huda Beauty’s Power Bullet ‘Interview’ seems to be the shade matching to what Iqra Aziz is wearing on her lips. The makeup artist has also defined her eyebrows but he has used a lighter shade of brown to prevent her makeup from looking too harsh. He has also not made her eyebrows look bushy or fuller that Iqra usually goes for. The apples of her cheeks have been defined a little and there is also some glow as well as pink blush happening on her cheeks. There is a bit of bronzing on the sides of her forehead to give some framing to her face. The entire makeup look is a beautiful work done with the shades of brown and Iqra Aziz looks gorgeous.

Iqra Aziz seems to be fond of adorning her hair with flowers. That was one thing that definitely stood out in her mehndi hairstyle where she wrapped flowers around the bun, which gave her a look of the 80’s Bollywood heroine. Similarly on her Nikkah, she has made sure to have flowers added to her hairstyle which absolutely look gorgeous. She has gone for two types of flowers which have been added beneath the bun. She is wearing an extension of the bun, which is going to give her hair some body as well as help her hold the dupatta in place. The rest of her hairstyle is simple gel back with middle partition, which was again pretty similar to the hairstyle she carried on her mehndi night.

Nomi Ansari has designed this gorgeous wedding outfit for Iqra. It is a bridal version of ghagra choli where Iqra has tied her lehenga closer to the blouse. It is an all red gorgeous dress which is heavily embellished. It again brings in the traditional charm and it seems that Iqra must have given Nomi Ansari the brief that she wants a beautiful red dress for her wedding day which is a signature color and the first choice for any Pakistani bride. Iqra Aziz did not opt for a modern or lighter bridal dress considering her Nikkah ceremony was held in the afternoon. She balanced it out by going for minimal makeup look but kept her dress on the heavier side. It is a fully embellished dress which has been adorned with red sequins and rhinestones. There is also a usage of iridescent sequins on her lehenga as well which break the monotony of red color and glimmer in different lighting. Iqra Aziz has worn a chiffon dupatta which has a cutwork border and embroidered motifs all over the dupatta. The thing worth noticing is Iqra Aziz’s love for cutwork border dupattas because she wore a similar kind of dupattas on both her mehndi and Nikah. 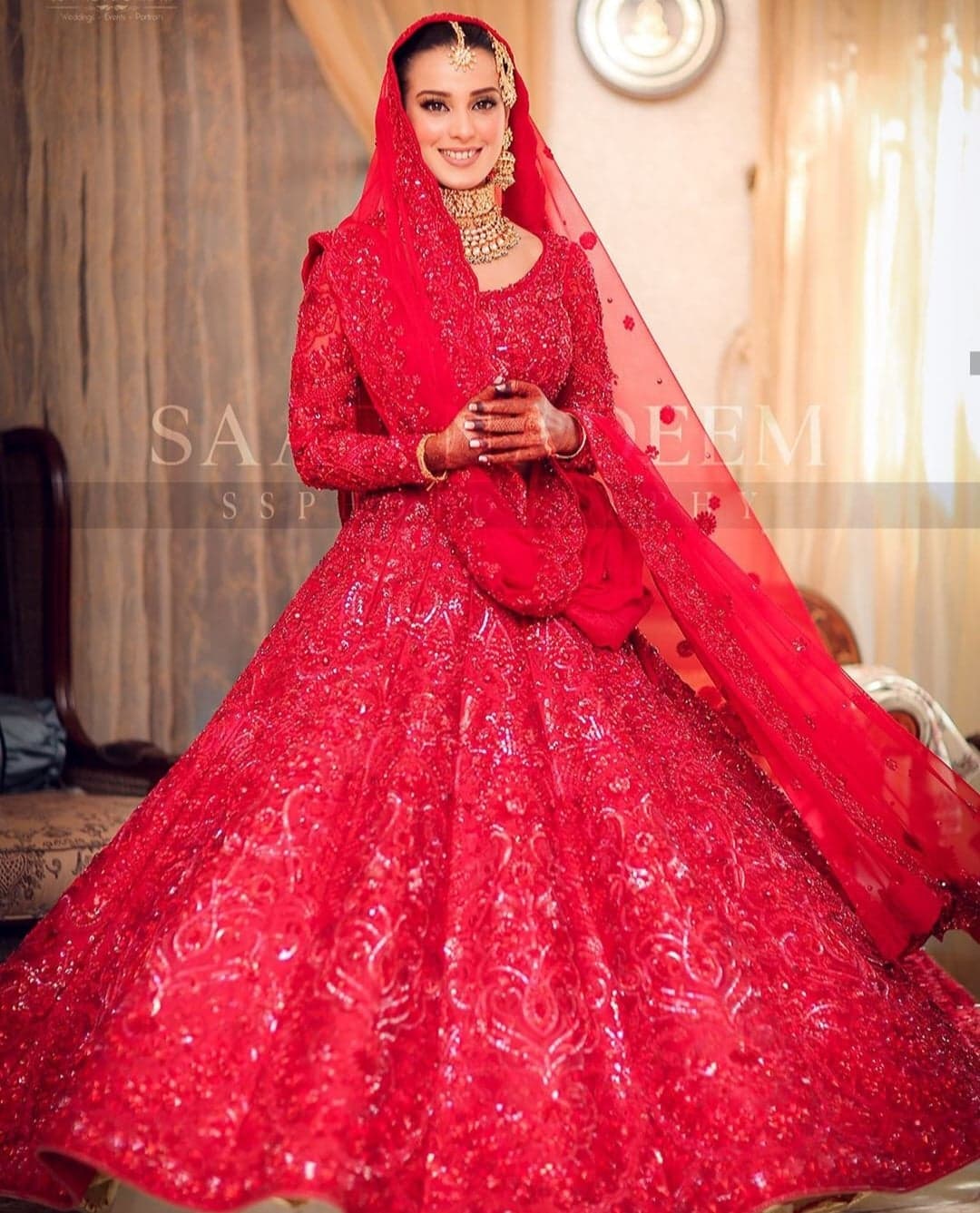 Iqra Aziz has gone for a gorgeous heavy jewellery set on her Nikkah. She has once again gone a traditional way by wearing all the signature ornaments like tikka, jhumar, chhokar and jhumkas. She is wearing a heavy kundan set which looks absolutely gorgeous and compliments her overall bridal look beautifully. Although the jewellery set is heavy but it does not overpower the entire look. Iqra Aziz has also kept the choice of her hand jewellery very simple with a few rings and two gold bangles on both the hands each.

Iqra Aziz has surely made a gorgeous bride and she has shown that she is very much rooted and loves the traditional bridal Pakistani fashion. What do you guys think of her bridal look and her hair, makeup and dress? Please feel free to share your thoughts in the comment section below.