Produced by Suhurwardy Brothers Mangoes TV Series become a huge hit when its season 1 was released in 2012. Comprising of 6 six episodes only it was definitely a breathe of fresh air in Pakistani Sitcoms Department.

The story of first season revolved around three South Asian room mates and problems they are encountered with while living in Toronta, Canada. The opening theme song “Keh Dena” received massive gratitude by the audience as it was sung by legend Alamgir together with canadian singer Christie Yung. 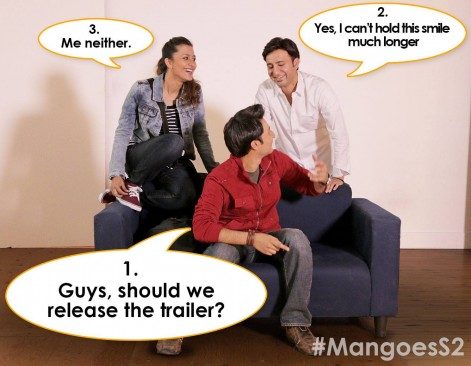 First Season was obviously incomplete as it got finished vaguely. There was much anticipation about Season 2 and finally after 4 years of Gap Suhurwardy Brothers decided to release Mangoes Season 2. Let’s see what Season 2 will offer us, here is the link to watch trailer of Mangoes Season 2: