Pakistani television viewers were introduced to the world of entertaining Turkish dramas when they aired many years back. While these Urdu dubbed Turkish dramas were an instant hit with the public, the private producers in Pakistan were not too happy with the situation. They felt threatened and opposed this move. However, the popularity of these dramas was such that the channels did not listen to what these producers and even actors had to say. The entire scenario changed when the Prime Minister himself recommended the Turkish Series Diriliş: Ertuğrul to the people of Pakistan with the government-run channel stepping in and airing the drama with Urdu dubbing. Diriliş: Ertuğrul has been a massive hit in Pakistan because it has a spiritual element to it as well therefore many viewers who did not enjoy watching those Turkish series that revolved around love stories, tuned into this one. The popularity of the actors who played leading characters in the series sky-rocketed within weeks and many of the Pakistani brands hired these celebrities to endorse their brands.

The warmth and love which the people of Pakistan feel for these actors is exemplary. These Turkish actors have also returned the love they got from Pakistan. It is also a source of great pride watching these actors endorsing and wearing Pakistani brands, outfits. There are some celebrities who still see this as a threat but there are also many others who welcome their Turkish friends with open arms and have joined hands with them for joint productions as well.

Here is a list of those much loved and immensely popular Turkish actors from Diriliş: Ertuğrul who were seen wearing Pakistani brands and outfits.

Esra Bilgiç received so much love from the Pakistani public because she played the leading role of Halime Hatun, who was one of the main protagonists in the series Esra Bilgiç. She is also loved for her innocent face and beautiful looks. This is the reason why not one but many leading brands in Pakistan wanted her to be their ambassador. Esra has worked more with Pakistani brands than any other Turkish celebrity. She was the brand ambassador of Khaadi, which is a leading clothing brand in Pakistan. There was a collection that was dedicated to her solely and she was seen wearing Pakistani outfits specifically designed for her in those photoshoots. Apart from that, as a part of her Jazz ad campaign, Esra was seen wearing shalwar kameez as well. Esra Bilgiç has signed other contracts in Pakistan as well and she has been one of the top actors from Turkey who have enjoyed working in Pakistan recently. Here are some beautiful pictures of everyone’s favorite Turkish actress in the most stunning Pakistani outfits.

Engin Altan Düzyatan enjoys the kind of popularity in Pakistan which is unprecedented. He played the leading role in Diriliş: Ertuğrul and his portrayal of Ertuğrul won over everyone who watched the series. Most people know him as Ertuğrul, they call him that. He has also visited Pakistan multiple times and showed the same love and affection for the country and its people which he gets from them. Although, some of his endorsements did not go as planned and it wasn’t smooth sailing for him like some of the other Turkish actors, for the most part, his visits were cordial and he was even seen adorning Ajrak in one of his visits. Unlike the female actresses, he has not endorsed a clothing brand but it was definitely good to see him carrying this Ajrak shawl when presented to him by one of the government officials.

Didem Balçın became a household name in Pakistan soon after the series Diriliş: Ertuğrul aired locally. She played the role of Selcan Hatun in the series; a character that was powerful in more ways than one. Her journey made the viewers love and hate her character as it went through different transformations. Didem Balçın also happily worked with Maria B, a leading designer clothing brand in Pakistan. She was the face of Maria B’s winter collection and that is when the Pakistani people got to see her wearing their traditional attire. She is another celebrity who really enjoyed working with a leading Pakistani brand and the people of Pakistan also loved her as the brand ambassador. Here are some amazing pictures of this gorgeous actress in Pakistani outfits. 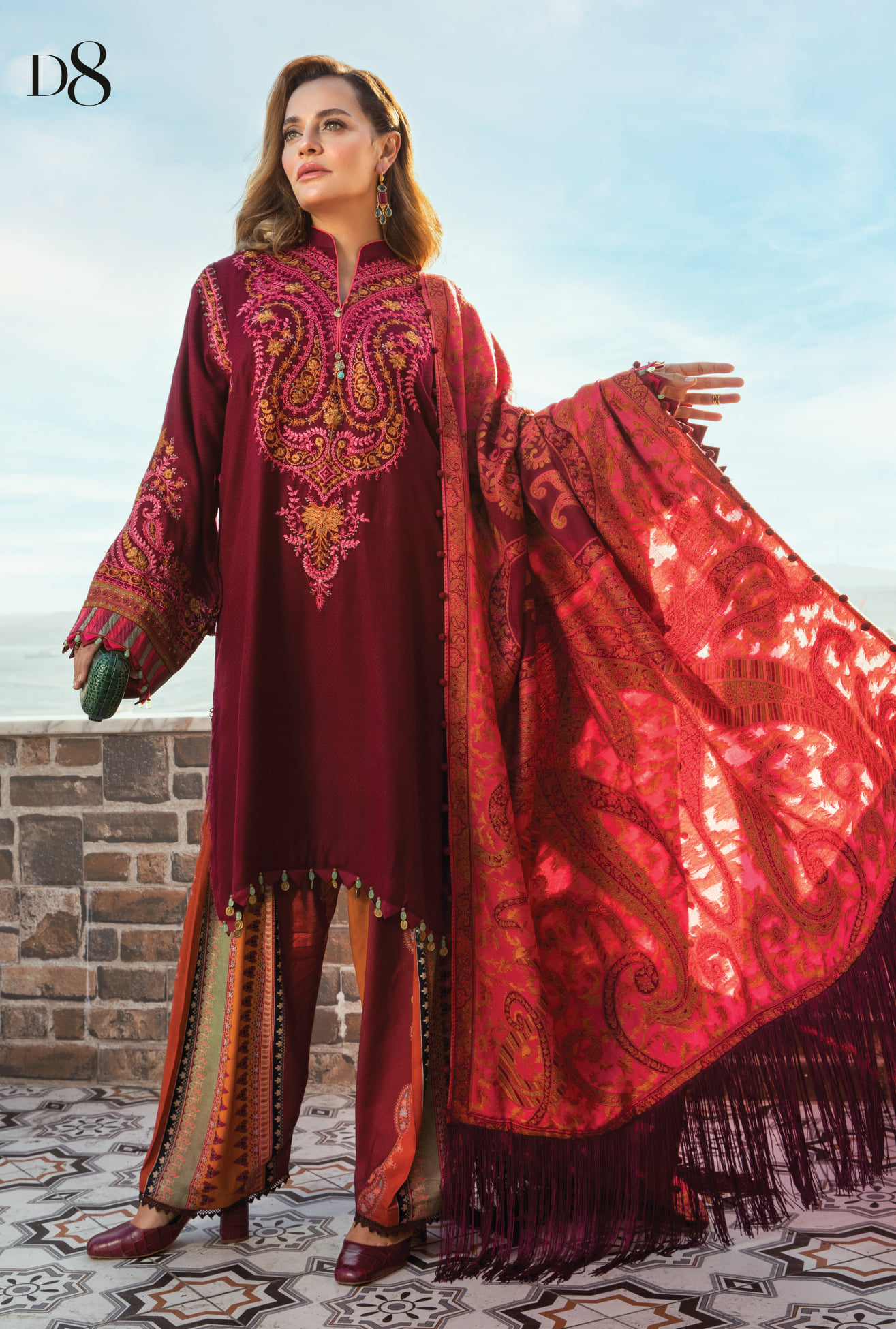 All those Pakistanis who have watched Diriliş: Ertuğrul have a lot of love and affection for ‘Abdur Rehman’ from the series since he was one of the most trusted companions of Ertugrul. Celal Al played this role so well that people have a great deal of respect because if it wasn’t for his impressive performance, this role wouldn’t have left such a lasting impression on people. Celal Al also visited Pakistan and showed the same warmth and affection that other Turkish actors did. He was also seen adorning Ajrak in one of his visits. He is also working closely with leading Pakistani producers in order to bring to reality the Pak-Turk joint television production.

Burcu Kıratlı is another Turkish actress who played a leading role in the series and made the viewers cry buckets of tears. Gokce Hatun was one of those characters in the series who went through many ups and downs. She also had the most emotional exit from the series. Burcu Kıratlı is the only Turkish celebrity who was part of a bridal campaign in Pakistan. She was the face of Pakistani number one designer Ali Xeeshan’s bridal campaign. While shooting for the campaign, she was seen in traditional bridal attire and in the other pictures in a relatively modern twist to this traditional bridal look. The Pakistani public loved her in this makeover since in the series her outlook was relatively simple. Here are some of the most stunning pictures of Burcu Kıratlı in Pakistani traditional bridal look.

It is so pleasing to see this friendship between Turkey and Pakistan flourishing and all the celebrities from both sides of the border playing such an important role in promoting it. More Turkish celebrities will be seen endorsing different Pakistani brands soon which makes us really excited. We would also love to see Pakistani celebrities working in Turkey since