Hamza Ali Abbasi is working once again with director Nadeem Baig (of Pyaray Afzal fame), but for the the big screen. The movie “Jawani Phir Nahi Aani” is supposed to be released by Eid-ul-Azha, 2015.

The producer, Humayun Saeed, who will be a part of the cast as well, informed Dawn News about the plot, “It’s a comedy movie so it doesn’t have a serious plot. It’s a funny twist on how some wives don’t give their husbands any space.”

Since the writer is Vasay Chauhdry, we can expect a wonderful comedy movie that will make us laugh like never before. It is a promised entertainer with 5 to 6 songs. 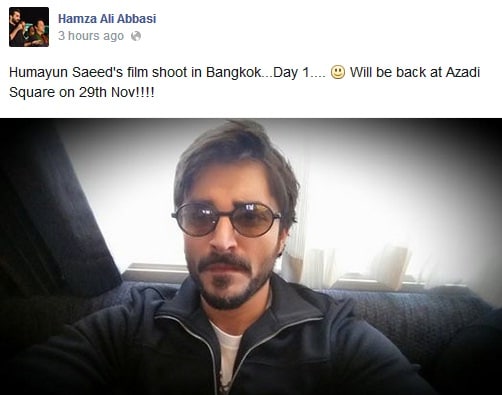 The rest of the cast includes  Ahmed Butt, Vasay Chaudhry, Mehwish Hayat, Sarwat Gillani, Sohai Ali Abro, Ayesha Khan, Javed Sheikh and Omar Shareef . Bushra Ansari will be a part of JPNA as soon as her role is confirmed.