The Pakistan Electronic Media Regulatory Authority (PEMRA) has asked TV channels to review ‘indecent’ adverts and chalk up a strategy to get their advert approved by an internal committee prior to the telecast. The statement by the authority came days after an advert featuring Mehwish Hayat to promote Gala biscuits came under severe criticism for being against the values of the society.

Let me take you on a majestic journey of our #des, as the most awaited #deskayqissay is unveiled. It has been an absolute pleasure to be part of this masterpiece by #Gala #deskabiscuit, where we cherish the cultural diversity of our des because “apnay des ka har rung hai nirala” ❤ What appealed to me was the unique concept that celebrated the richness of our des's heritage. We have so much to be proud of. 🤩 Ace team 👇🏻 Directed by @asaduhaq Makeup and hair @waqar_makeup Outfits @alixeeshantheaterstudio Choreography @swaydanceproject Styled by @fatimabutt.11 Set design @hashimali90 Managed by @fahadcitrus Jewellery @alijaverijewelers Production @seeme_production Dop: @serkansg #MehwishHayat #Gala

In a statement, the regulatory authority said: “It has been observed with concerns that themes of advertisements of ordinary consumer products like biscuits, surf, etc being aired satellite TV channels are not corresponding with the disposition of these products. The trend is causing unrest and behavioral disturbance among the viewers being not only in violation of the commonly accepted standards of decency but also the socio-cultural norms of Pakistani society.”

In this context, viewers are criticizing PEMRA on Twitter for allowing such indecent advertisements. Pertinently, viewers are of the view that airing advertisements regarding general consumer products like biscuits in such a bizarre manner where the visuals do not commensurate with the use of the products is unwarranted and needs to be looked into. In addition to this, complainants are of the opinion that the presentation of the products in such manner is wittingly or unwittingly merely aiming to promote consumerism, it added.

Beside criticizing, some people have a lot to say. They are Ok with what is happening, they have no issues with the ad. 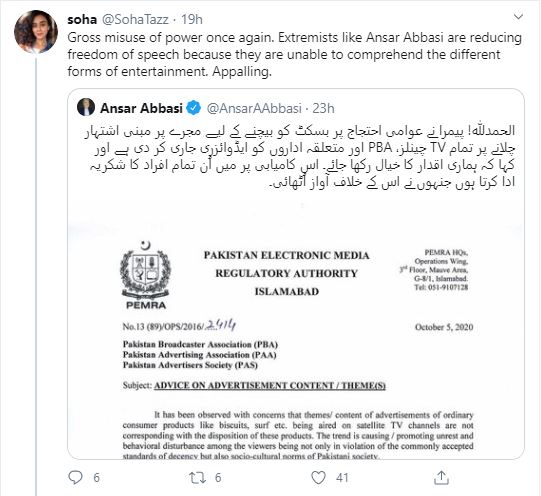 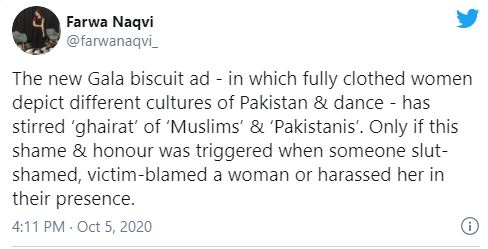