Recently Sadaf Kanwal’s statements on marriage rules and feminism went viral on social media and as a result, she has faced severe criticism and trolling. Sadaf was accompanied by her husband Shahroz in the viral interview and Shahroz also added to Sadaf’s statement about marriage rules.

After the constant criticism and trolling, Shahroz was called at a show on Samaa Tv to share his stance on Sadaf’s statements. 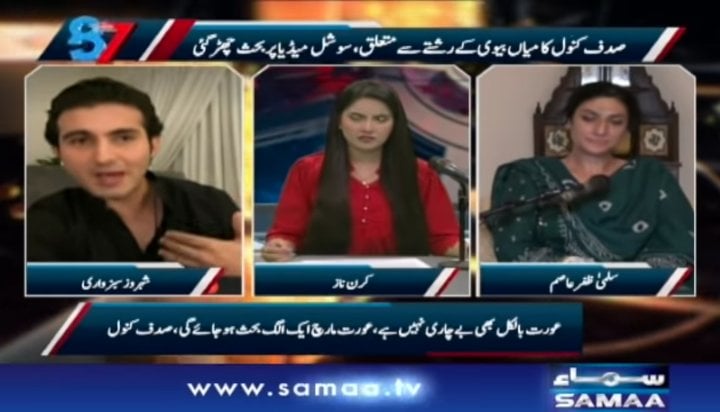 In the beginning, Shahroz said, “90 percent of the Pakistani population agrees with her statements. Sadaf was not on gunpoint to give statements in favor of her husband nor she was an oppressed woman, it was just her way to love and respect her husband and that’s what our religion, Allah and His Prophet (SAW) has taught us”.

He added, “And when we walk on the path guided by our Prophet (SAW), it’s automatic that a woman starts respecting her husband and the man in return respects her as well. And if she will not get the love and respect in return then why will she do everything like this for me”.

He further said, “Sadaf’s statements were not digested by 10 percent people in the public and they said that her statement has oppressed the weak women in the society. We live in the Islamic Republic of Pakistan and in our country, a woman must be given the respect and honor our religion has taught.”

“If my wife has expressed her love and respect for me, on which 10% public disagreed with her and said, “practice what your preach”, they have resurfaced her old videos and made their own case weak”.

Check out the link below to watch Shahroz Sabzwari’s stance on Social Media trolling and his take on defending his wife Sadaf Kanwal.