Yasir Hussain Unhappy With The Circumstances Of Pakistani Theatre

Theatre has also been a largely hit like all the industries. The film industry went into the shambles and has taken quite a few years to grow back. Theatre is one form of arts that has been around for centuries and people have always loved working and watching the medium. We have a strong history of actors and actresses who have done an amazing job in dramas.

When the industry got affected, the theatre was also among the ones where the talent and work got stopped pouring in. However, it is slowly coming back and we still have actors who are very much interested in performing arts like Omair Rana, Sanam Saeed and Yasir Hussain. Ahad Raza Mir just got a nomination for his role of Hamlet in Canada. Yasir Hussain who has been very active in the Pakistani theatre took to Instagram and congratulated him but also pointed out the circumstances of our own theatre. This is what he said: 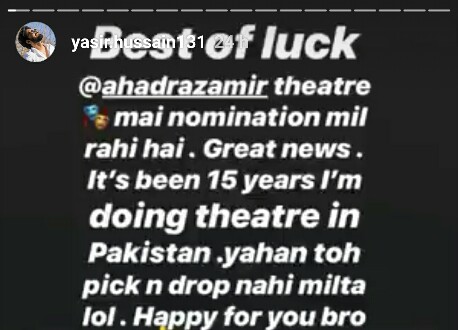 Yasir was the part of Naach Na Jaane recently which got a lot of attention and many people are trying to bring the glory days of the theatre back. Let’s see if it will happen or not!