There is no denying the fact that being fit, healthy, and slim is a demand of the job of celebrities and stars. The showbiz industry is highly competitive and has certain criteria that all those celebrities passionate about this field and their job have to stick to. More than ever, Pakistani celebrities now pay more heed to stay active, healthy and fit. They also take it as a part of the job to inspire their massive fan following about fitness and physical well being in general. This is the reason, now more and more celebrities have started opening up about their fitness routines, be it in terms of food intake or their workout sessions at the gym.

Pakistani actresses are under constant scrutiny for their looks, figure, and weight on the scale. This is the reason, they put a lot more effort into staying in shape. Time and again, some of the actresses have also spoken about how it then becomes the demand of the camera to maintain a certain weight otherwise the camera always adds a few extra kilos and it is not the look the actresses want for themselves. With the widespread usage of social media and the growing fan following of the celebrities, they now make sure to put the point across and showcase how much hard work they put into staying fit and maintaining their figure. They do that by showing their gym and workout sessions sporadically and also add motivational captions to boost the morale of those who are looking for that push to start their fitness journey.

Here are 10 Pakistani actresses who have worked hard on their figure:

In a recent interview, Ushna Shah spoke about her fitness journey and how there is a lot more pressure on the female actresses to look good and stay in shape. She also mentioned that since she suffers from Polycystic Ovarian Syndrome (PCOS), she has to work extra hard to stay fit and maintain her figure.

Ushna Shah was never on the chubbier side but when she joined the industry, she immediately realized that she had to shed a few pounds for the camera and since then, she has made a point of adding regular workout sessions in her routine. Ushna Shah doesn’t mind gaining a few pounds especially when she goes on vacation because she knows when she will come back to Pakistan, she will get back in shape by maintaining her meticulous workout routine.

Sana Fakhar’s drastic transformation is absolutely inspirational for all the girls and mothers out there. Sana Fakhar was always into fitness but after she became a mother and gave birth twice, she gained a lot of weight. After that, she realized that she had to do it for herself first and then had to be mindful of the industry she was associated with. Sana Fakhar then worked hard day and night and not only lost her weight but transformed her body completely. She is not fitter than ever before and her workout routine and sessions are widely available on her social media handles for people to see.

Fitness has now become a part of her life and she is not concerned about the number on the scale but is purely focused on unlocking new fitness levels with each passing day. Now that Sana Fakhar has lost all the weight and has transformed her body, she is not stopping there and shows that it takes consistency, hard work, and complete lifestyle change to maintain this level of fitness.

Srha Asghar is a relatively new face of the industry. However, in a short span of time, she has impressed the drama viewers with her talent and acting skills. Srha Asghar’s weight loss journey is also inspirational and the best part is that she is very open about it because she understands that she has to impart a good message to her young and impressionable fan following about the importance of staying fit, healthy, and active.

Srha Asghar has lost a lot of weight and in order to maintain it, she has veered towards weight training. She advocates weight training and recommends it to be added into the routine slowly. She feels it’s the best workout and shows effects earlier than any other exercises do. Although she has achieved her weight goal, she still works hard to maintain her figure and be the best version of herself in terms of physical shape and figure.

Mehwish Hayat has always been very conscious of her looks, overall personality, and figure. This is the reason ever since she has become famous, she has worked hard to maintain her figure and stay in great shape. Mehwish Hayat is into all sorts of fitness routines, be it pilates, cardio, or kickboxing, she posts pictures of her workout sessions and shows it to the world that it takes a lot of hard work and consistency to maintain a good figure. It is a fact that although healthy and controlled eating habits also contribute towards maintaining the weight workouts and exercises help in toning and shaping the body. 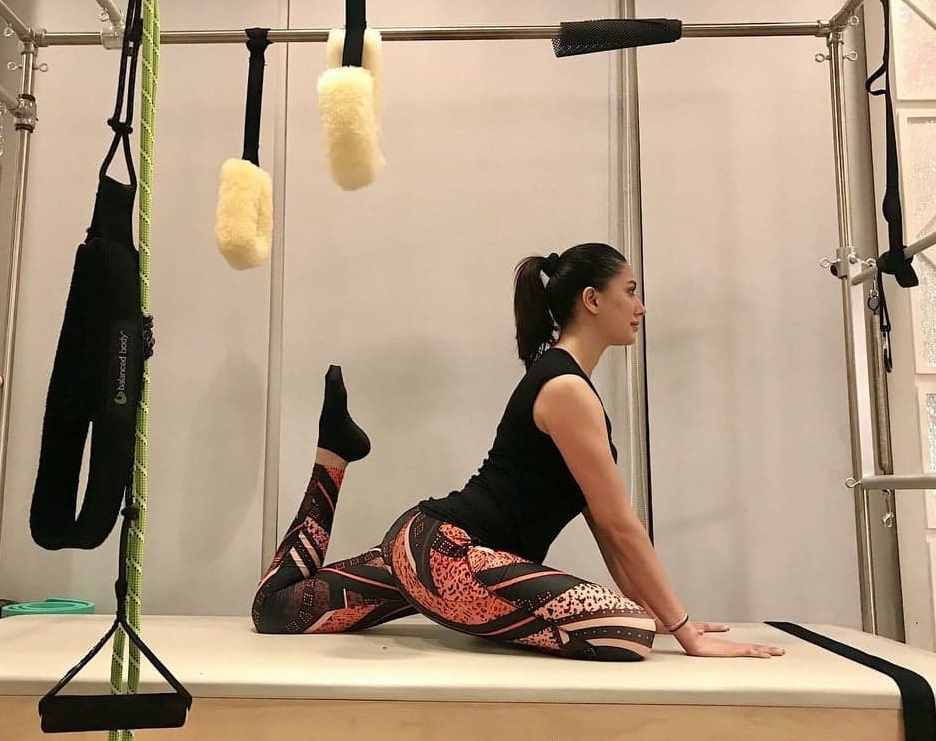 Sonya Hussyn revealed in an interview years ago that she was always on the chubbier side, this is why when she joined the industry, she became so conscious of her weight that she decided she had to be consistent to stay in great shape. Sonya Hussyn since then has been on track and continues to maintain her figure that she has worked hard for.

Sonya Hussyn’s ex-husband was also a fitness trainer, so she gave him a lot of credit for helping her start off with her fitness journey. Sonya Hussyn doesn’t really show much of her activity in the gym but there are times when she does post about working out in the gym and sweating it out to stay fit and maintain her figure that she has worked hard for. 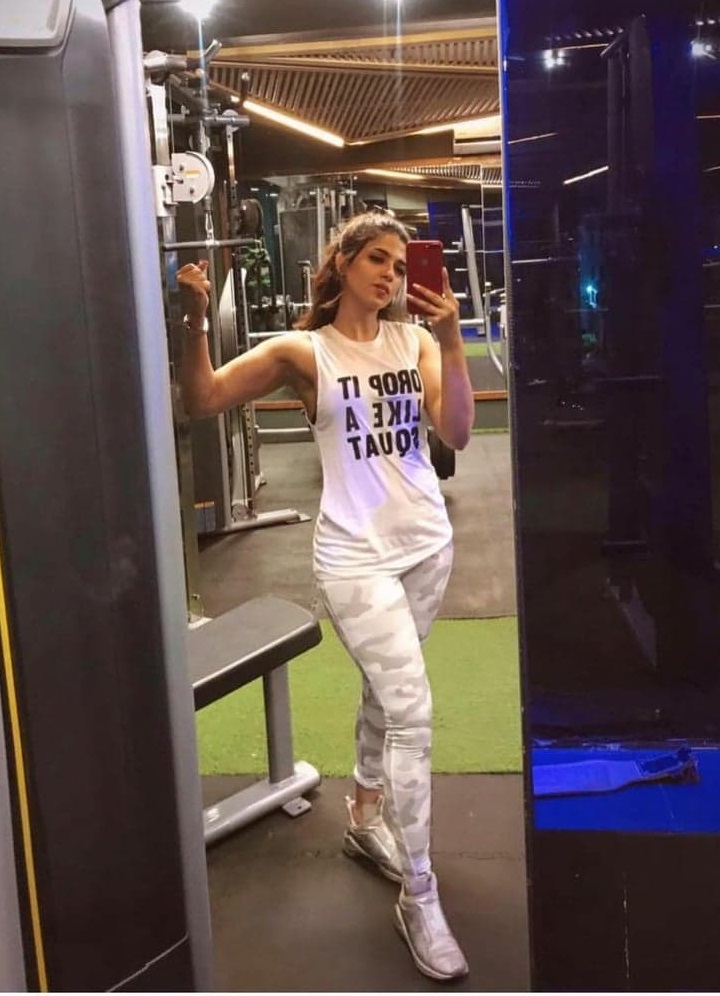 Hania Amir joined the industry at a very young age and she was always in great shape. Hania Amir was always slim but ever since she joined the industry, she decided she had to incorporate working out and gymming into her day to day routine because it was going to help her with not only staying in good shape but also with the toned body that she feels is the demand of her job. Hania Amir has also gotten comfortable with the idea of modeling and because she has to showcase different outfits in every other brand campaign that she does, it is important for her to have a lean and toned figure.

Maya Ali also joined the industry at a very young age. At that time, she was not actually chubby but also not the size zero that she has become now. Maya Ali’s fitness journey was slow but the way she has transformed herself has left people in awe of how far she has come. Maya Ali made sure that she lost all the extra weight before she signed her feature films. At this stage of her life, Maya Ali is absolutely fit and probably size zero. She did state that it also takes a lot of dieting for her to maintain the weight and the figure

Saba Qamar has revealed that if it wasn’t the demand for the camera, she was absolutely fine with carrying some extra weight. However, because she is so passionate about her acting career and profession in general, she has made fitness a part of her life. Saba Qamar is into healthy eating, she also advocated yoga at some point because she felt it calmed her down. Now she does post some pictures of her workout sessions at the gym. Saba Qamar feels a certain amount of weight looks good on the camera, this is why she has to maintain it. Saba Qamar has always been lean but now, she has toned down her body and has worked hard to maintain her figure.

Ayesha Omar has been a part of the industry for a long time now. She joined the industry when she was young. Ayesha Omar was also on the chubbier side, this is why she slowly worked on herself and now flaunts her size zero. This perfect and lean figure has been a work of consistency and dedication.

Ayesha Omar feels passionate about working out and exercise routines, this is why during the lockdown, she was probably one of those few actresses who hosted online workout sessions in collaboration with fitness trainers and instructors, because she didn’t want this lockdown to become an excuse for herself as well as others who were concerned about losing motivation and dedication of staying fit and in good shape.

Although Ayeza Khan does not really post much about her fitness routines in a few interviews, her husband Danish Taimoor proudly spoke about Ayeza’s quick weight loss after she gave birth to her first child. Danish Taimoor mentioned that she lost almost 15 kilos and Ayeza herself stated that she signed the project and went back to work a couple of months post-delivery. This is why when she saw herself on camera, she realized that she had to lose weight and be in good shape because it was the demand of her job.

Ayeza Khan since then has lost a lot of weight and in a professional photoshoot, she did show that she works out alongside her husband and doesn’t believe in taking days off of fitness routine. Ayeza Khan is very strict about her diet and food intake in general, she strictly avoids oily and sugary items and works out regularly to maintain her lean figure.

This completes the list of these 10 Pakistani actresses who have worked hard on their figure and have become an inspiration to so many fans and followers of their out there. Which one of these actresses is your favorite? Feel free to share your opinion about them.