Lux Style Awards are the only awards in Pakistan which cover all the entertainment channels, the film industry, the music industry and the fashion industry therefore the viewers get a chance to see the entire industry under one roof. This time around HSY was in charge of the award ceremony, he was the director of the show and everyone was talking about the changes he made in the format of the show. On the red carpet everyone was talking about certain surprises which were in store including Imran Abbas’ singing performance. In this article I will talk about how the function was conducted, some of the skits and performances which were worth mentioning and how this show was presented to the viewers who were going to watch it on television. The article does not contain my views about the nominations and the celebrities who won the awards.

Here is my take on the 16th Lux Style Awards.

The skit featuring Osman Khalid Butt and Maryam Saleem was funny and honest but its timing wasn’t perfect. The idea of including the fashion squad was great, I enjoyed the way everyone reacted to this idea and the fact that all the people who were part of this squad were experts in their respective fields.

Like every other year, the production values of the show were impressive and this year the camera work was definitely much better than the last few years. Previously, viewers were shown the same faces in the crowd over and over again and usually similar expressions too but this time the camera man focused on different celebrities sitting in the crowd.

Ali Kazmi hosted the red carpet really well, the way he interacted with the celebrities showed that he was good friends with all of them therefore the interactions were spontaneous and fun.

The only dance performance worth mentioning here was that of Reema. The choreography, choice of song, her outfit, her make-up and her expressions were right on point. Jimmy Khan, Abid Brohi and Ali Sethi’s singing performances were energetic and fun.

Halit Ergenc inclusion in the show was a terrific idea. Everything he said about Pakistan and Pakistanis was touching. 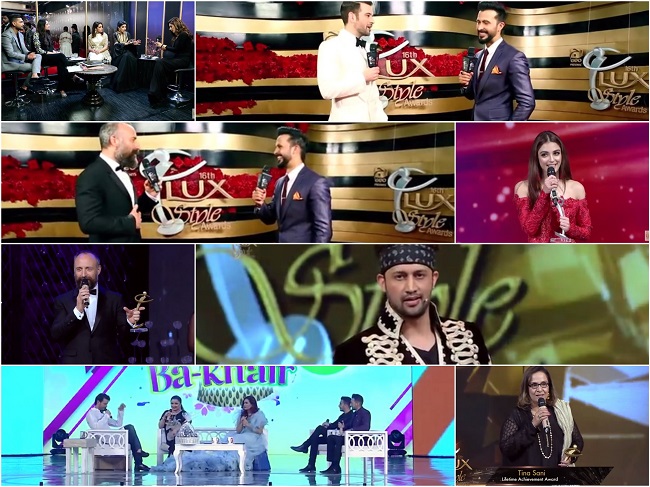 Unfortunately, this was one of those shows which had far more lows than highs because of multiple reasons. Firstly, Atif Aslam could not handle multitasking. After singing (lip syncing!) so many songs continuously, he was exhausted and breathless when he finally started hosting the show. There was a lot of hype surrounding the fact that he was going to host such a show for the first time but he definitely did not live up to people’s expectations, there are so many other hosts who could have done a lot better. He looked uncomfortable and there was absolutely no spontaneity, everything he did including singing or those “dance moves” were too rehearsed and he did not look comfortable doing any of it. Also, all the songs Atif performed on were too slow and his lip syncing at times was terrible. There were too many dancers on the stage when he was performing but even then the performance as a whole was not entertaining enough.

It was a really bad idea to show the ceremony, red carpet and fashion squad in one go because it completely ruined the flow of the ceremony. The red carpet should have been shown separately because apart from ruining the flow, it also increased the duration of the entire show considerably and it required a lot of patience to sit through the entire award show.

The #HindiMedium joke by Osman Khalid Butt wasn’t really needed, personally, I did not enjoy it mainly because of the fact that Saba Qamar did give some phenomenal performances this year and she deserved the award. Mahira Khan and Osman Khalid Butt’s rap was passable. There was nothing out of the ordinary or too witty about the content because it did look like they had just picked up things from all the discussions on youtube and different forums and compiled them in the form of a skit. I hardly laughed at any of the jokes.

Junaid Jamshed deserved a better tribute. It would have been so much better if Atif Aslam wasn’t burdened with so many things since our industry is full of talented people who could have contributed to the show. Also, someone directly associated with Junaid Jamshed should have been part of the tribute. Unfortunately, there was nothing touching about this tribute.

It was really funny when Atif Aslam actually referred to Mawra Hocane as “Hocane” and not “Hussein”! He pronounced her name wrong, not that I blame him but it was really odd coming from the main host of the show. Nauman Ijaz’s comment when the audience predicted Udaari will get the best drama award was rude. He said, “ab itna bhi frank hone ki zarurat nahi hei!!”. Although Dillagi was a phenomenal play and deserved the award but even then his remark was extremely rude.

Maya Ali’s remarks when she came to receive best actress award did not make a lot of sense but definitely showed the mentality behind playing such roles and feeling pride in doing so. Like every other year, many celebrities who were not even comfortable speaking English were forced to do so or felt that they had to speak in English because everyone else was doing it! Aly Khan was the only person who spoke Urdu with finesse.

Overall, the show was disappointing and most of the celebrities failed to live up to the hype. There was too much happening; the show itself and the red carpet but it wasn’t impressive.
How many of you watched the show, please share your views about