Ahsan Khan – A Man On A Mission

Ahsan Khan is well-known for playing the hero in dramas. Now this man is on a mission to play a hero in real life too. All of us can make a difference in someone’s life if we try and Ahsan Khan is urging people through social media to do whatever they can to make a difference in someone’s life. Yesterday Ahsan Khan came across a beggar on the street who had a story to tell. There was a time when this man used to work in the Middle East, had a wife and seven children but all of that came to an end when his car crashed and he lost his entire family. His brothers made him sign on a blank paper and took everything he had. His story is very saddening. Ahsan Khan made a video of this person who speaks very fluent English and wants to earn a decent living because he does not like what he is doing. Even in these trying times, this man has a strong faith that God is on his side. Ahsan Khan asked people to help him make this person’s present and future better. 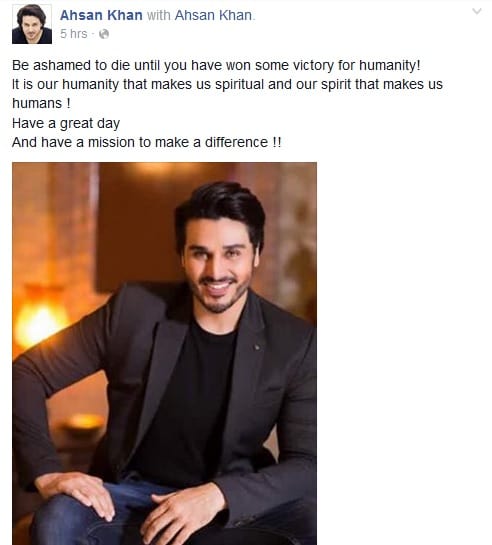 It looks like this year Ahsan Khan wants to do everything he can to make a difference in someone’s life.