Earlier this week Salma Zafar accused celebrity couple Javeria and Saud of defrauding her and many others who worked for their company JJS Production House. She stated that JJS owes her about Rs10 million alone.

Later Sherry Shah also stated that she has not been paid but blocked from all possible means of communication.

Few bloggers showed up in favor of these celebrities among them was Anny Khan currently based in New Jersey, show host and producer at B4U Music, ARY Digital and other renown channels.

Answe to #Saud #Jaweriasaud brother’s THREAT over something i posted. YOU can not Attack me coz i Attack back LIVE. #SalmaZafar

Anny now claims in a live video session that she has been threatened by Saud’s brother who is accusing her character but she is not afraid of anyone so she spoke about it openly. People are now supporting her and requesting her to file case against such hypocrites. 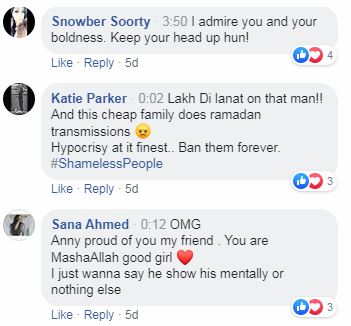