The newest heartthrob in town, Bilal Ashraf has opted out of Urwa Hocane and Ali Azmat starrer Jhol.

He revealed the news on his Facebook page. A local publication asked for the reason, however, Bilal Ashraf refrained from sharing any details. 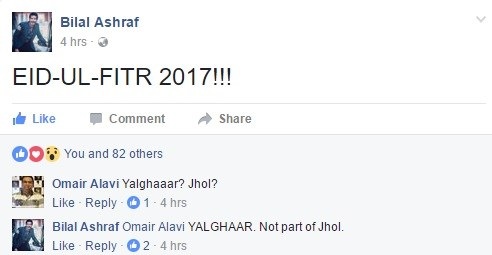 Jhol is a romantic comedy film directed by Shahid Shafaat.

May 2017 be a great year for everyone with perfect health, loads of wealth and tons of success. Wishing everyone a very very HAPPY NEW YEAR!!! #pakistan #yalghaarofficial #bilalashraf a#rangreza #ashrafbilal #happynewyear #2017

The film stars Urwa Hocane as a businesswoman while Ali Azmat plays the role of an Ayaash cop. Bilal Ashraf was supposed to play a pivotal role in Jhol.

Usman Mukhtar Shared His Thoughts On His Co-Actresses Getting Married