Eid holidays are over now and reports of film business from various sources are publishing in papers. In Pakistan traditionally there is no concrete mechanism to know the exact earning of a film. In traditional single screen cinemas, tickets are issued manually so it is near impossible to estimate the total business generated form a film in such cinema. However with the arrival of multiplexes which maintain the records of tickets sold, now a near estimate of the film total business is easily established. Usually the owner of these multiplexes issue the business generated by a film in their chain of multiplexes, which sums up the total business of the film. This method is not fool proof. Surprisingly for some unknown reason film producers in Pakistan seldom release any statement about the total revenue their film.

This Eid many films were released including Hollywood, Bollywood, Urdu, Punjabi and Pashto.

Various papers (English and Urdu) have published the reports on films business. As per these reports three main films Bajrangi Bhaijaan, Wrong Number and Bin Roye are running full house in all major cities during the Eid Holidays as well on this weekend.

Following Bajrangi Bhaijaan after a big gap, are the two Urdu films Wrong Number and Bin Roye which are on second and third place respectively. Wrong Number is slightly ahead of Bin Roye in terms of number of screens and business. Wrong Number was released on 87 (approx.) screens while Bin Roye is released on 81 (approx.) screens nationwide. In comparison Bajrangi Bhaijaan is released on more screens (171) alone than the combined total (87 + 81 = 168) of the two Urdu films Wrong No. and Bin Roye indicating the massive appeal of the Bollywood films among Pakistani audience.
As per the English Daily The News, Bin Roye is leading in Islamabad, while in Karachi Wrong No. is ahead. An interesting general analysis is that men are loving Wrong Number and hating Bin Roye, women are loving Bin Roye and hating Wrong Number.

The healthy trend on this Eid is that the audience have also endorsed Pakistani Urdu films while supporting Bollywood film. Both the Urdu films Bin Roye and Wrong No, are running full house during the Eid holidays in whatever space and time is allotted to them. As per Nadeem Mandwiwala, the head of Mandwiwala Entertainment the success of Pakistani films is attributed to the aggressive marketing campaign rather than the content of these films.

Here are the news reports/excerpts which are the basis of this post.

Salman Khan has been forgiven his sins. He must have worried how his May conviction and sentencing to 5 years in prison for a 2002 hit-and-run homicide might have dampened the prospects for his movie. But like India’s courts, the country’s movie going audience gave the megastar a stay of appeal, supporting Bajrangi Bhaijaan with the biggest opening weekend ever for Khan and the 3rd biggest in Indian box office history. According to cinema owners in Pakistan, the film has resonated just as well with the Pakistani public, threatening Ant Man with an early exit. The good thing is, local releases Bin Roye and Wrong Number have been running just as successfully as Bajrangi Bhaijaan.

“An extraordinary audience turns up over Eid and all films are running full house,” Film producer, distributor and cinema owner (Atrium in Karachi and Centaurus in Islamabad) Nadim Mandviwalla shared with Instep. “Wrong Number is doing better in Karachi and Islamabad has shown a higher demand for Bin Roye. But this is a result of marketing hype not content. The Eid influence remains 9 days, which we see in advance booking, and we’ll see full effect of all films by Monday.” 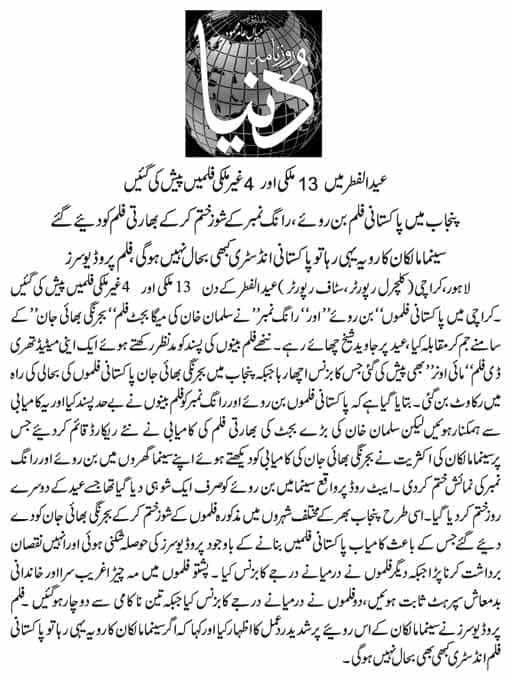 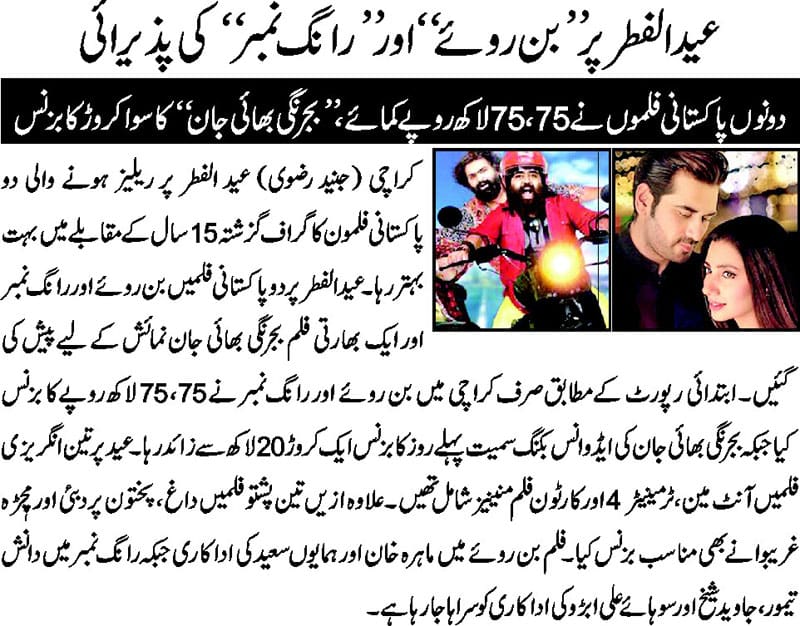