Daniyal Zafar to work in Bollywood

Like Ali Zafar, his younger brother Daniyal Zafar is also making his bollywood debut from an upcoming film of Yash Raj Films (YRF). Yash Raj Films is a famous production house of Bollywood and Ali has also worked in their film Mere Brother Ki Dulhan.

Eighteen year old Daniyal is pursuing a career as a performer and singer. 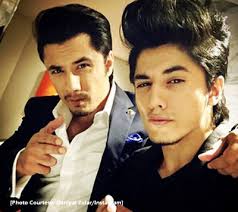