He is been warmly welcomed and greeted by Express Group.

Urdu Daily Express has printed special advertisements and reports on the achievements of Aamir Liaqut which are also posted here. The media group is hopeful that their upcoming Ramazan special transmission will achieve new heights of popularity under the hosting of Aamir Liaqut. Aamir Liaqut himself dedicated this Ramazan to soldiers of Pakistan Army. Aamir Laiqut Hussain has shifted to Lahore from Karachi as Express Media House is based in Lahore.

Aamir Liaqut Hussain started his media career from FM radio and then joined Geo television in early 2000’s. From past ten years he was working with Geo TV, though for a short duration he also joined ARY television. Aamir Liaqut Hussain also served as minister of religious affairs in the cabinet of former dictator General Parvez Musharaf, after being  elected as Member of National Assembly in 2002 on ticket of Muttahida Qaumi Movement (MQM). However MQM revoked his membership after his alleged television program against a religious minority.

On television Aamir Liaqut Hussain got fame mainly from programs of religious content like Naats,Aalim Online, Ramazan Transmission, Special transmission on Shabe Miraj, Shabe Barat and Lailatul Qadr. He also hosted a game show named Inaam Ghar earlier this year. As per Geo TV all these programs and transmissions made records of viewership and television ratings, some made records at Pakistan level while some were Asian records. Aamir Liaqut was part (host) of eight hour transmission of Geo News which targeted Pakistan Army and Secret Agencies in April 2014, which caused suspension in license of Geo News. 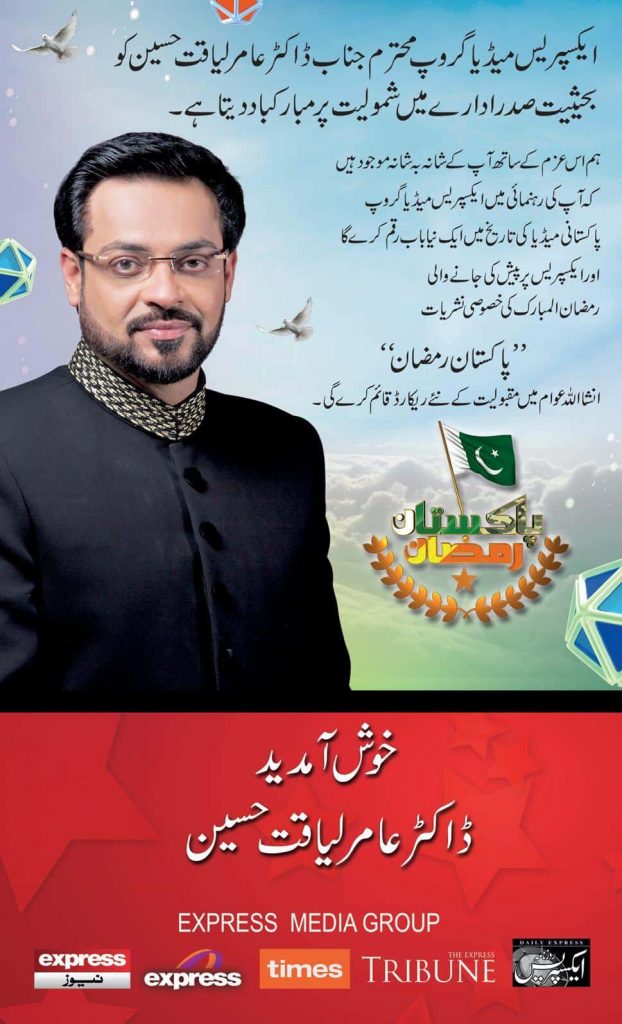