Faysal Qureshi’s Message For The Nation On Independence Day

Faysal Qureshi is a firm believer that social media has a lot of power that can change minds of the people which is why he made a long video message for his fellow countrymen on this day. In this video message Faysal Qureshi said, “We should all look at ourselves as Pakistani and not as Balochi, Punjabi, Pathan or Sindhi. People try their best to divide us and we get divided. We keep on fighting based on territory, creeds and religion. We live in one country and rejoice in the same things like when Pakistani films or games get recognition we are all happy but when that time ends we again turn against each other. I request all of you that we should value our country and on this 14th August it makes me very happy to see that many people thought of the APS attack and the sad incident in Kasur.”

He also said, “Social media is a very powerful medium. We should use this medium properly because that way we can change a lot of things.”

Talking about his recent inclusion in the LSA and his rejection of the award he said, “I have won this award many times so it was never about my own recognition but the recognition of many other people who worked very hard for that project.” 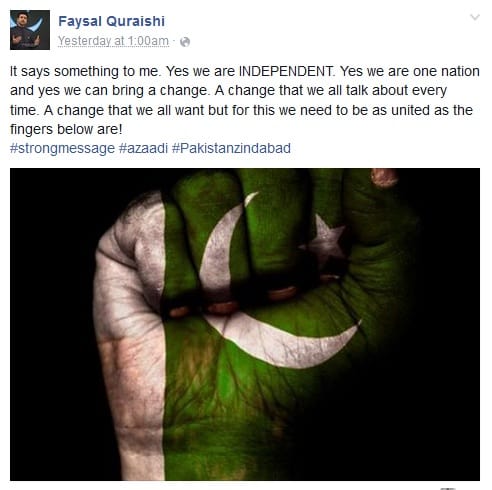 Faysal Qureshi said straight away, “I do not want any nominations, I work for my fans and not for getting awards.”

Faysal Qureshi said that many people are trying that we should fight with each other but we should beware of such people and not listen to them. He also said that he has always tried to make a difference by voicing his opinion in different ways and he will continue doing so.