Lately the official trailer of the film Jeewan Hathi was shown in Karachi by Matteela Films & Footprint Entertainment at an exclusive event with the cast of the movie along with the respective press and media. 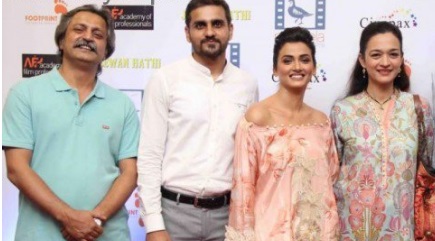 Jeewan Hathi (The Elephant in the Room) is an upcoming Pakistani dark comedy short film directed by Meenu Gaur and Farjad Nabi and written by Fasih Bari Khan. The film will be released on Zeal for Unity short film festival.

The film is directed by Meenu Gaur & Farjad Nabi, produced by Shailja Kejriwal & Mazhar Zaidi
and is written by Fasih Bari Khan. The film is all set to release on November 4,  2016.