Turkish series Ertugrul has become one of the latest addictions of Pakistanis. These days Pakistanis can neither stop themselves from watching the Urdu dubbed version of the series on PTV and neither can they stop moral policing the series’ Turkish actors for being different from their characters in real life.

However, whatever moral policing Pakistanis would have done, everybody will drop everything and fall in love with Esra all the more once they find out how Esra Bilgic once school Priyanka Chopra and called her a hypocrite for promoting war.

Remember when Priyanka Chopra arrogantly replied to a girl named Ayesha Malik who had called her a hypocrite for being a UN peace ambassador and yet tweeting against Pakistan when she written “Jai Hind” in response  to the pseudo surgical strike of India in Pakistan.

Priyanka Chopra was called out by a girl for being a peace ambassador and yet promoting nuclear war. Priyanka Chopra had very arrogantly snubbed the girl and shut her up. But it has been amazing to discover that Esra Bilgic had taken notice of the incident back then and schooled Priyanka Chopra for promoting war.

“Being patriotic doesn’t mean that you should encourage the war. You shouldn’t belong in a conversation concerning war as a UN goodwill ambassador. You effect many children, many people as a role model. And you were so disrespectful against a woman who just asked you a question about your statement that you shared with millions people in your own twitter account,” Esra had commented on Priyanka’s Instagram profile. 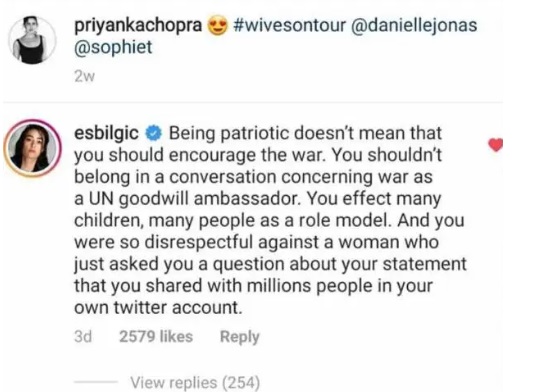 So yes, Pakistanis can go on and love Esra Bilgic all the more because the Turkish actress proved her love for Pakistanis long before Pakistanis started watching the series Ertugrul.