Interview with Sharaz Ali – All You Need is a Vision!

2013 has brought glory for the Pakistani Entertainment Industry. Independent movies made by amateur Pakistanis have reached different movie festivals all over the world. Pakistani talent is being appreciated far and wide, and recently a Pakistani movie ‘Zinda Bhaag’ has also reached the Oscars.

Sharaz Ali is the director of the movie ‘Writhe’, which had the opportunity to feature in the Cannes Film Festival 2013. The short film has Armeena Rana Khan and Geoff Cooper as the leads. The story revolves around a woman’s mental pain and suffering due to an incident that occurred in her life. 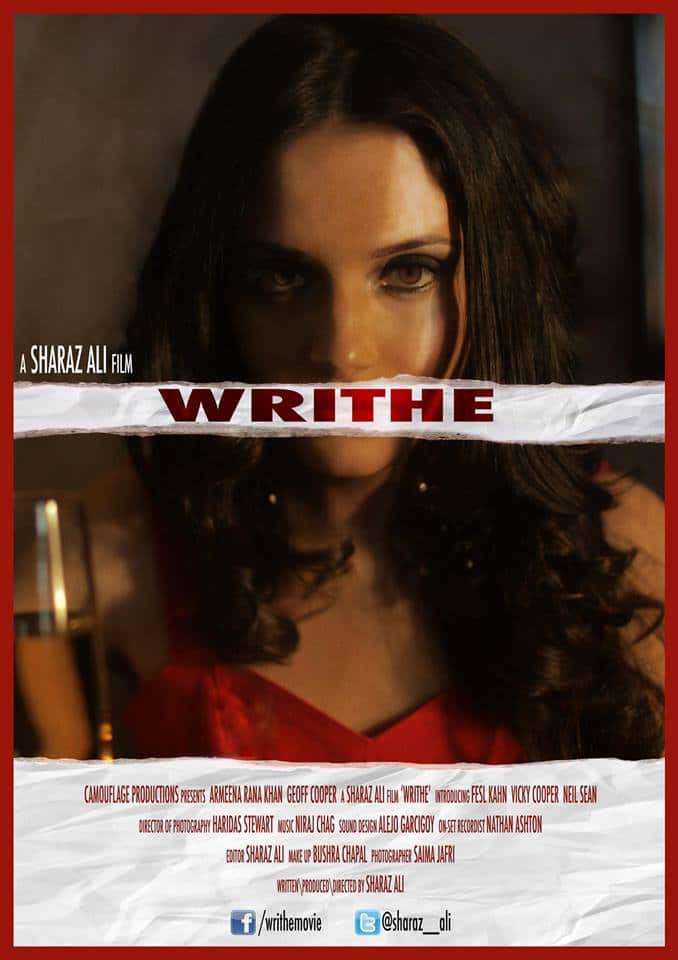 Sharaz might have lived in Derby for most of his life, but his roots are still from Pakistan. He aspired to make an independent film, and though he faced many difficulties; he stayed determined and finally managed to complete his film with a lot of hard work and dedication. He had stated that he had no high hopes for the movie to get selected at the Cannes Film Festival, and had entered it in the spur of the moment, but he was in for a pleasant surprise when he got the acceptance mail. His film gave him an opportunity to mingle with the Hollywood’s elite crowd which included names like the Oscar winning actress Jennifer Lawrence and James Franco; the star from the Spiderman series. All the stars had nothing but praise for his spectacular short film. Writhe was also premiered in London after its success in the Cannes Film Festival.

Here is an interview of Sharaz Ali where he talks about his movie Writhe, his experience of working with Armeena Rana Khan, and why his movie has not released in Pakistan yet.

‘Writhe is based on a true story’, I said standing this in front of the packed screening room…

Followed by ‘no, not really’, after receiving some raised eye brows!

Even though it is not based on a true story, the core ingredients are all very much true and one that the audiences of countries such as Pakistan have seen much too often- domestic violence, rape and suicide due to depression and lack of support from the community. Writhe touches on all these in a way where the beauty of the shots, the audience don’t get hit with it until they have walked away- once the film has finished and discussion begins of the intentionally multilayered story.

She is a director’s dream, as she takes direction very well, easy to work with and gives 110% each take. I am really pleased and have every faith in her that she will keep surpassing audience expectations and be a force to reckon with in the future.

The first day of shooting was on a brisk winter morning- the sun was out but not everyone could tell the temperature was in the minus! Everyone was layered up and freezing yet thanks to me, Armeena had to be a thin red dress- she was feeling like an ice cube, but kept marching on with each take! I think that was the point I knew she in it with me and her professional commitment showed.

I pictured this almost innocent, beautiful woman in this big, bad world of London and she played that to perfection. Armeena has a beautiful face but her eyes were the key and window to her pain and suffering, as seen in the poster. Not only that, you also see something sinister brewing in there and that is why she was perfect for the role!

Armeena is a pleasure to work with and we have become a close friend since our shoot together, we have complete faith in each others talent. We have been eager to work together since Writhe, but time has been the only barrier for our future collaborations. We have many interesting projects in development so watch this space!

I think most of the Pakistani audiences would have heard of Writhe in the Writhe special bulletin on ARY. ARY was there exclusively to cover the screening, and had exclusive access to some of the footage for their report.

I am finalizing a deal with some online/on demand companies where the film will eventually be available for audiences from around the world.

Making a successful film needs a team – a tight, well-polished and hardworking team. You can have a great script, but it could get ruined in the shoot, or have a great shoot and ruin it in post, and even having the best actor sometimes doesn’t help if you take big Hollywood examples; if the rest of the team didn’t perform! Overall, you need a well-oiled machine and each cog needs to be on the same page – once you have that, success will follow.

So in this instance, I had a great idea I was enthusiastic about, great team and a beautiful actress who was made for the role! I knew exactly what I want to shoot with and how to get the shots I require, which I believe gave the rest of the team more confidence in me and believed in my vision. Just knowing that they trusted me was humbling, and also stressful- as it’s all on me!

Parallel cinema is, at the starting point for a niche audience, which then spills over to slightly more mainstream when audience hunger for different, creative or new age cinema content grows.

In Pakistan, I know my film maybe bold for the general audience, but I know the younger generation will grasp this as an alternative to the norm. I am not saying Pakistani cinema needs a change or is dead as many reports suggest, but more so that as a global audience, I would like to give Pakistanis next generations something more rewarding to watch and something that’s not entertaining, but brings to light many issues in a creative way.

I know finance is also a very key issue here but if we can push/fund quality instead of quantity, younger filmmakers who see things differently like myself and born in Pakistan to share the vision and voice- eventually this will bring our Lollywood industry up to date and up to scratch.

This will eventually, bring a blurred line between mainstream and parallel cinema which in return will do what cinema is supposed to; give the audience a choice of what they would like to watch.

I believe in coming years, we need to move with the times but also not forget our roots. This will bring a positive change to the industry, the audience acceptance and the country’s stand in the film world.

As a filmmaker, I know sometimes you have to compromise your vision to get to the end result… As an individual who has seen change from the outside, lived in Pakistan and seen it from both sides. The best advice I can offer is to keep working on your art, keep your focus and patience as it’s not an easy industry- anywhere in the world to break into and we have a saying here, ‘You’re only as good as your last work!’ so make sure each projects counts.

Finally, as I am sure you already know, the more you do the more you learn, so don’t stop or give up at the first hurdle, the race is long and only with yourself- so only you can push yourself to the finish line!

I would love to work in Pakistan- either in the TV or Film world. Besides being a challenge, I think I can teach and learn from a country that I would like to push into the world via its creative platforms.

This year was the first time I had gone to the Cannes Film Festival with my films, and to hear people saying that my film was the ONLY Pakistani film in the festival was astonishing. I thought to myself, how could an industry as large as Lollywood not have anything here?

For this reason, I would like to come and help develop, change and mold the industry to help get positive recognition, show its talent and of course that we can and are a competitive force in the film industry!