Year 2019 was nothing short of happenings for the Pakistani showbiz industry. The Pakistani drama industry saw its good and bad phases but it definitely was a successful and memorable year for everyone. The year is now ending on a high note and it couldn’t have ended in a more festive, memorable and happening way and it is solely because of Iqra Aziz’s wedding. Iqra Aziz and Yasir Hussain have been together and they got engaged earlier this year, however they are now stepping into the new phase of their lives by getting married and the entire industry is celebrating their sacred union. The fans and supporters are also keenly following their wedding festivities which are definitely the highlight December, 2019.

Iqra Aziz and Yasir Hussain celebrated their mehndi function last night at their home and all the big names of the industry attended the function. The pictures are resonating the energy and zest everyone had which contributed in making this an unforgettable night. Iqra Aziz and Yasir Hussain’s couple has been at the receiving end of a lot of appreciation as well as criticism but now when they have decided to open a new chapter of their lives, they have garnered nothing but love and blessings from everyone.

Iqra Aziz is a young and beautiful face of the Pakistrani drama industry. She is not only beautiful but is immensely talented and she has proved that throughout the years that she has been active. Iqra Aziz has earned a huge fandom and this is the reason why everyone was keenly waiting for her wedding pictures. Iqra Aziz was meant to look gorgeous and now when the pictures are out, there’s no denying to the fact that she is a one beautiful bride who is happy and glowing from within.

Here are some details regarding Iqra Aziz’s Hair, Makeup and Dress worn by her on Mehndi function:

The gorgeous yellow outfit for Iqra Aziz’s mehndi function has been designed by Faiza Saqlain. It is a beautiful flared vibrant yellow Pishwas which has heavy silver embellishments. The solo colored dress is a beautiful creation and compliments Iqra Aziz’s vibrant personality and her beautiful complexion. The designer has given Iqra Aziz puffy sleeves, which brings back the fashion from the 80’s. The dress also has a bustier which has a motif right in the middle. The bustier and the flare of the entire Pishwas is separated with a silver belt which accentuates Iqra Aziz’s petite waistline. Iqra Aziz has worn half sleeves in order to showcase the beautiful bridal mehndi that she has adorned her hands with. A net dupatta is also a part of the dress which adds charm and elegance to it and it has a cutwork border. To make the dupatta a part of the dress, it has also been heavily embellished with silver sequin motifs. The back of the dress adds a new dimension to it and is a designer’s way of giving it a modern edge because the overall look is very ethnic, traditional and inspired by olden era. Iqra has worn deep back which has been tied with an embellished strap. This beautiful yellow jora is definitely going to give young brides-to-be a lot of inspiration and Iqra Aziz looked like a vision on her mehndi night.

Iqra Aziz has gone for a comparatively simple look on her mehndi function which comes as a breath of fresh air. This can absolutely be labeled as her signature makeup look where she keeps her face makeup flawless, structured thick eyebrows and a visible flush of color on her cheeks which give her a youthful and fresh look. Iqra Aziz’s hair and makeup has been done by her favorite makeup artist Zain Zaidi and he has also been working with her for a long time, therefore the makeup artist definitely knows her face and also has an idea what looks good on her. There’s a bit of depth on her eyes which has been given to her by defining her crease. The makeup artist has used a warm brown eye shadow all over her lid and crease. She is wearing false eyelashes and a very thin liner to tie her falsies and natural eyelashes together. There’s a bit of highlighting that has been done on her tear ducts to make her eyes look awake and bright. Iqra Aziz is wearing a pink toned blush and the similar shade of pinky nude lipstick to tie the whole look together. The hairstylist styled her hair in a simple sleek bun and gave her a center partition. The bun has been covered with gajras and that gives her a very ethnic and mature look. Iqra Aziz definitely looks like an 80’s heroine straight from Bollywood movies and she looks absolutely stunning. 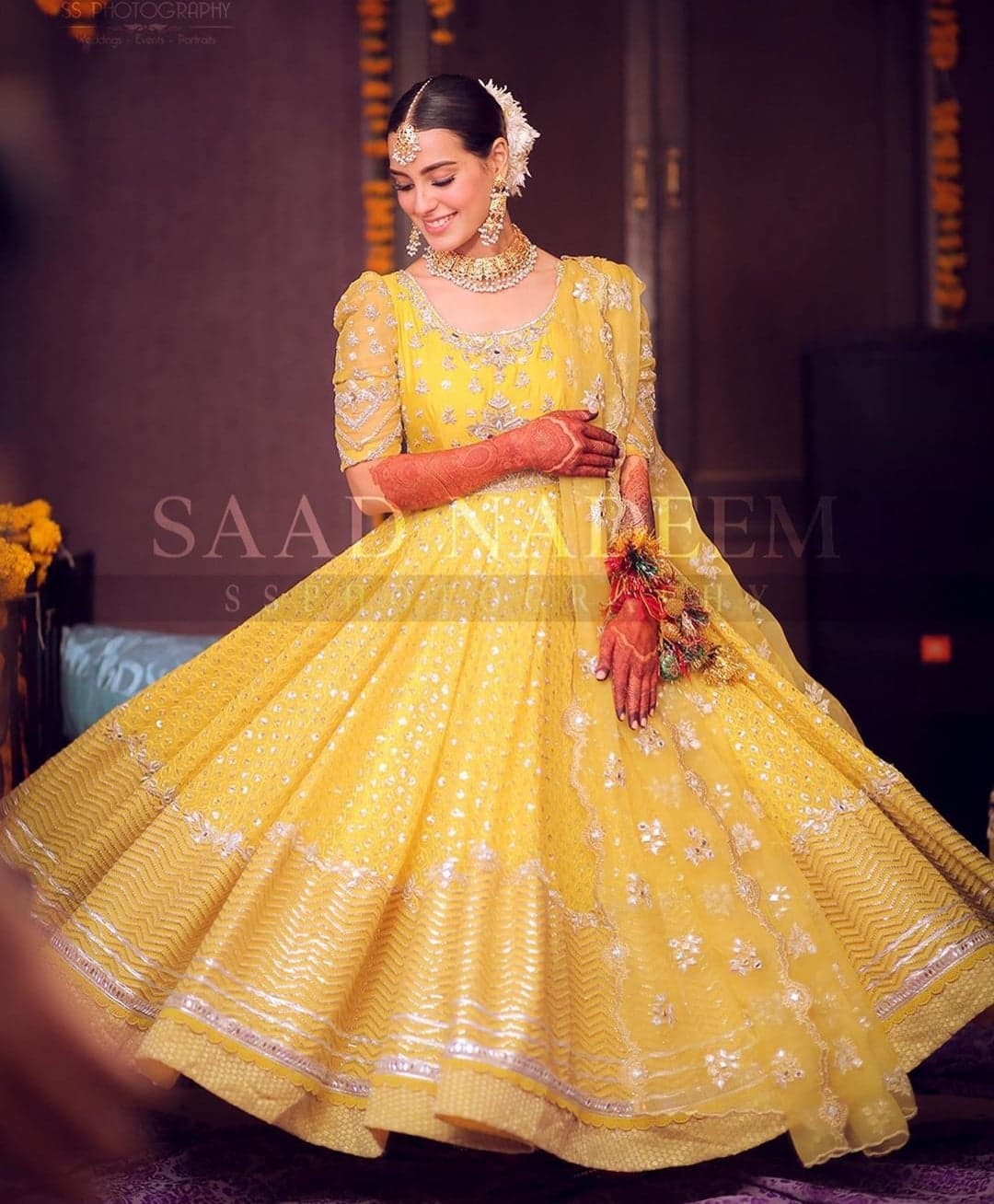 Iqra Aziz’s bridal jewellery has been designed by filigree Pakistan. She is wearing a Multani set which has multi colored stones and cluster of pearls at the bottom. The choker, the tikka and the earrings all have the same design and it is that kind of jewelry set that has never gone out of fashion. It is absolutely amazing to see Iqra Aziz choosing the ethnic route on her mehndi night and embracing the traditional bridal culture so confidently. She looks beautiful and this set has given her more ethnic charm. Her mehndi stylist is Hina Khan who has done a fabulous work on Iqra Aziz by giving her a gorgeous mehndi design which is intricate and has beautiful patterns. Going by the old wives tale, the gorgeous bright red color of her mehndi definitely suggests Yasir Hussain loves her a lot. 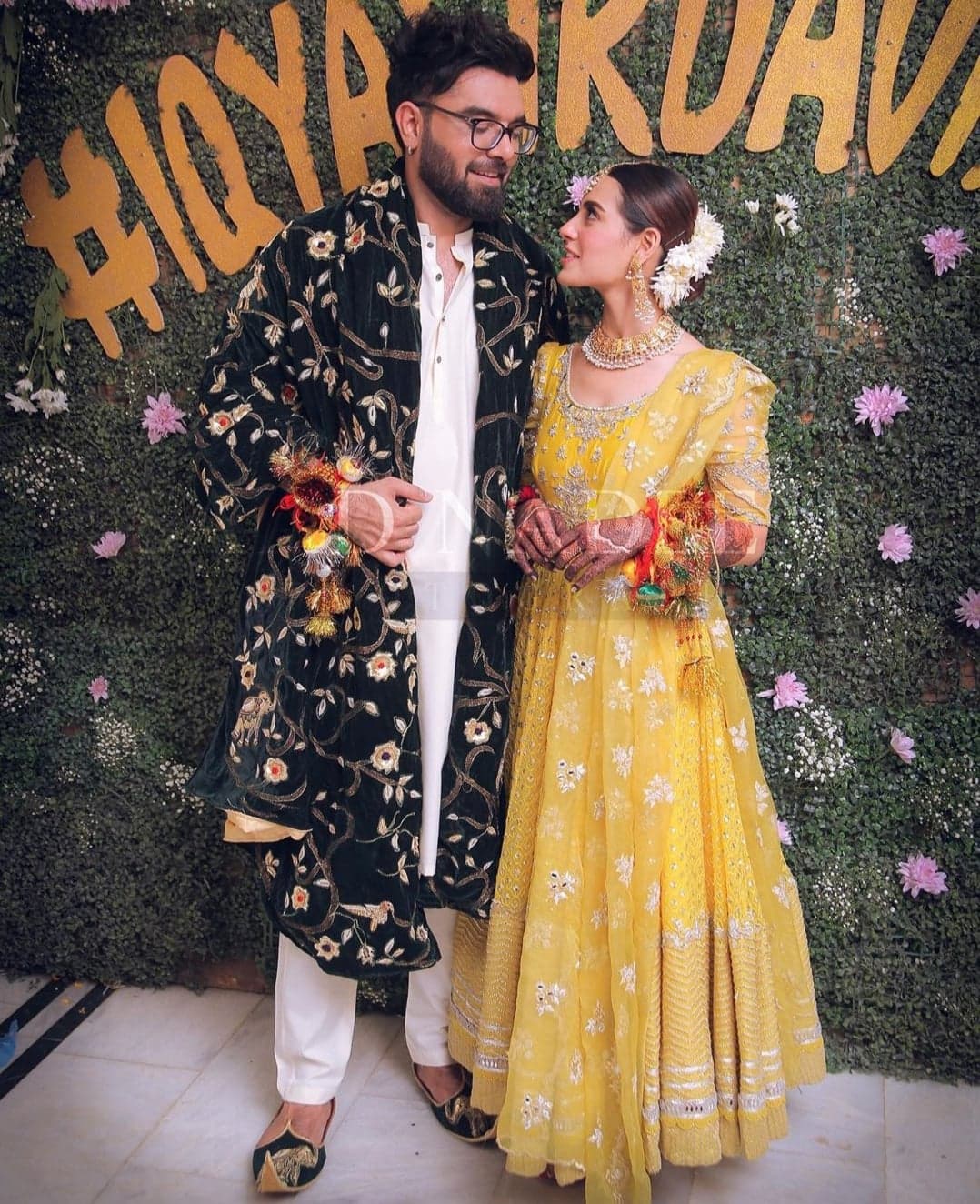 These were the details of Iqra Aziz’s Mehndi bridal hair, makeup and dress. Iqra Aziz surely made a beautiful mehndi bride, she kept her hair and makeup minimal but the heavy gorgeous Pishwas, ethnic jewellery and the hairstyle adorned with flowers gave her a complete and mature look which she carried gracefully. After seeing her mehndi look, we are definitely excited to see her as a Nikkah bride. How did you find her dress and overall styling? Feel free to share your thoughts in the comment section below.