American actress Lindsay Lohan, has believed to be converted to Islam and Muslims from around the world are flooding her twitter with congratulatory and welcoming tweets. Lindsay has scrubbed clean two of her social media accounts and posted the message “Alaikum salam” on Instagram, which has been widely interpreted as a sign that she’s converted to Islam. Muslims around the world are welcoming a new sister to their religion.

Lindsay Lohan deleted all her pictures after converts to Islam with the caption ‘Alaikum salam’ on her instagram. May Allah bless you ☺ pic.twitter.com/Yk04HjxJo6

Lindsay Lohan wipes all photos on her Instagram account leaving just “Alaikum salam” on her bio. Subhan’Allah. May Allah guide her. Ameen pic.twitter.com/Ran8ExVwxU

I once admire lindsay lohan amd suddenly i found out that she is too bad to be an actress and now i heard she converted islam. Subhanallah.

Lindsay has dropped hints about converting to Islam in the last few years too and has been vocal about her interest in the religion. In 2015, she had faced a backlash in the US after she was photographed with a Quran in her hands in New York. “They crucified me for it in America.They made me seem like Satan. I was a bad person for holding that Quran,” said Lindsay. 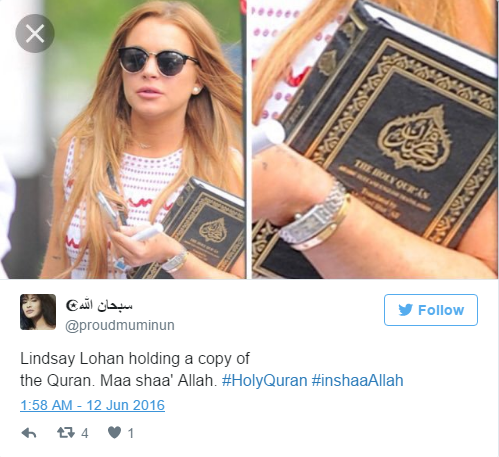 When she moved to London, she said one of her Saudi friend gave her the Quran she was pictured holding. “My very close friends, who have been there for me a lot, in London are Saudi and they gave me the Quran and I brought it to New York because I was learning,” she revealed on Turkish TV show Haber Turk. “The Quran opened doors for me to experience spiritually, to find another true meaning. This is who I am.”

Lindsay has not announced anything officially yet but if she has actually converted to Islam, she would not be the first celebrity to do so. Cat Stevens, Mike Tyson, Ice Cube and Muhammad Ali all converted to Islam during the prime of their careers.