Mahira Khan & Fawad Khan Are Asked Not To Comment About Ban of Pakistani Celebrities in Bollywood!

Mahira khan and Fawad Khan are facing quite a lot of troubles since they have worked in Bollywood movies and it has been followed Indo-pak tension.Addition to their troubles is that the movie makers of Raees and Aae Dil Hai Mushkil have asked both the stars to stay silent on the matter of Banning Pakistani artist in India. The sources reveal that stars are asked not to get involve with media on any such discussion.

It is very much obvious that Indian media will try its level best to increase the controversy by asking tricky questions.Therefore for protecting the celebrities and makers of the film from further controversy they are given instructions to make no comment on the current situation.

According to Bollywoodlife “The makers of Ae Dil Hai Mushkil and Raees have banned Fawad, Imran and Mahira from giving any interviews. All the three stars have been given clear instructions that everywhere they go, they will be asked about the issue (the ban on Pakistani artistes in India) but they should avoid it. In fact, the makers have told them not to interact with the media because they don’t want their (Fawad or Mahira’s) view be misconstrued, which could spoil things further”.

Previously Mahira Khan and Fawad Khan were criticized for not responding to the prevalent Indo -Pak tensions and Bollywood banning Pakistani stars.

This what Mahira and Fawad said regarding the entire situation. 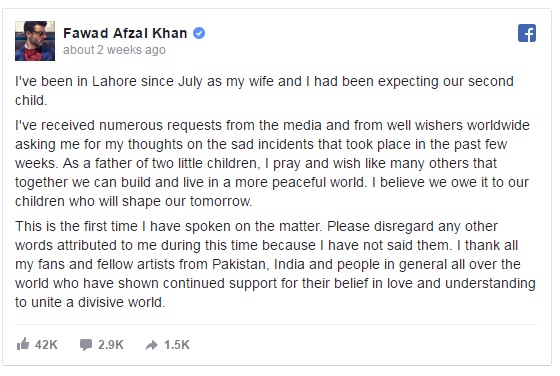