Pakistan is not the only country where result day of higher secondary education marks new beginnings for thousands of youngsters across the country. It is almost the same in many parts of the world and this week marked the eventful day when A Levels’ results were announced and students in England got to know where they are headed to.

Malala Yousafzai from Pakistan was also one of those who had appeared in A Levels’ Exams  this year. According to the results, she has scored grades high enough to be able to enter United Kingdom’s pride, the world renowned Oxford University whose alumini includes the leaders and scientists and breakthrough researchers all over the world. From this part of the world, Benazir Bhutto, Indira Gandhi and Imran Khan have also studied from the Oxford among others. Malala’s chosen subjects in the university will be Political Science, Philosophy and Economics.

So the journey that started on that fateful morning of October, 2012 on a broken road in the Taliban influenced Swat Valley has reached one destination by making Malala enter the Oxford. Though, knowing the 20 year old’s ambitions and confidence, she is definitely not going to stop there. 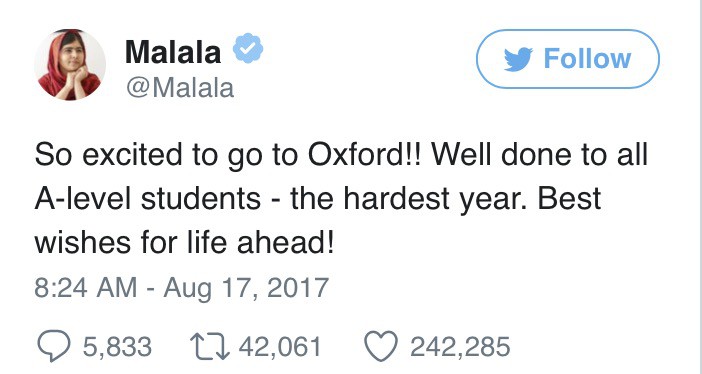