Men’s Fashion That Makes No Sense

Men have as much of a right to be fashionable as women. This is the reason why men are also a very active a part of our fashion industry. But shouldn’t there be a difference between the kind of fashion men and women do? Sometimes you see men in our fashion shows wearing things that have nothing to do with their gender. Showing creativity is one thing but why do these fashion designers forget that some things look totally absurd. I understand that men can wear jewelry that is specifically designed for them. I am all for men wearing bright colors too but since when is it okay and fashionable for men to wear duppatta. Well, not only duppattas but also garlands of flowers that are specifically meant for females. Apart from that there is also no difference between the kind of jewelry the men and the women usually wear in these fashion shows.
Our Fashions shows do not represent our society or culture in any way even when it comes to the kind of clothes that the women wear. There is more skin than actual clothes. We hardly ever see any of the women actually wearing these clothes that are exhibited in fashion shows in real life but I guess the eccentricity and boldness of the female side of the fashion industry has gradually been accepted by people. There is more tolerance and less criticism. 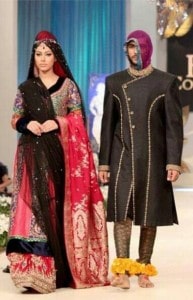 Tolerance is a good thing but now are we expected to tolerate and accept this strange aspect of men’s fashion which makes no sense whatsoever. There is news that for the first time in Pakistan, there will be a Men’s Fashion Week this year at the end of August. I am actually dreading the sort of things that we will get to see in these shows. Duppattas, garlands, anklets, what is next? The truth of the matter is that male models have to fight a very hard battle to survive in the industry. This is the reason that very few of them have been able to make a name for themselves. One of the top Pakistani male models Nomi Qamar in his interview to NewsLine confessed that, “some of the stylist and photographers share the young male models as ‘gifts’ with each other”. But he also adds that it is something very common all around the world so it should not be considered a big deal. 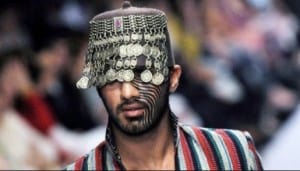 I find it difficult to believe that some male model will gladly out of his own will dress up like a woman and walk on the ramp but it is happening. We are slowly thinning the differences between genders, not in a good way but in a bad way. As a society we are always debating that whether men and women should have equal rights or not. Now the new debate is that is it okay for men to wear women’s clothes and accessories? It seems very wrong to me. What is your opinion?