Meray Pass Tum Ho is currently one of the leading television serials running on ARY Digital. The drama that stars Ayeza Khan, Humayun Saeed and Adnan Siddiqui in the lead revolves around a materialistic woman and her loving husband. Mehwish, played by Ayeza Khan is a cunning woman who would do anything for money, even if it involves bypassing her morals and going on trips with her boss, Shahwar. Up until now, we’ve seen Mehwish not caring a dime for Danish’s feelings, compelling him to accept bribe and trying to mix up with her elite friend, without any regards to what Danish feels.

Mehwish’s character is despicable, something a loyal woman would absolutely hate. Even Ayeza Khan herself states Mehwish’s character to be tough and something she’d never want to live again. But all those who watch the drama know that Ayeza Khan has delivered Mehwish impeccably. The actress has nailed Mehwish’s expressions, her feelings and makes you hate her just by looking at her.

Playing such a character is not easy and therefore Ayeza Khan is definitely worthy of the praise coming her way. Even the director, Nadeem Baig, has been highly impressed with Ayeza’s performance as Mehwish.

Nadeem recently took to his social media to praise Ayeza for her courage and craft for playing Mehwish so close to life. Nadeem didn’t forget to mention that people were hating Mehwish just because Ayeza had played it so real. “Well done Aiza Khan” was what Nadeem Baig wrote.

Ayeza Khan too was quick to thank Nadeem Baig for his praise, but in doing so, she did deliver a premonition. The coming episodes are more painful for Danish and that the fans will definitely be hating on Ayeza more than ever for playing Mehwish. “I dont know how people will react after watching the next episodes but I am sure these episodes will keep them hooked to Meray Pass Tum Ho,” wrote Ayeza on her Instagram. 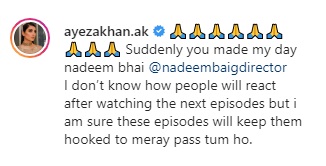 We for one, highly impressed with Ayeza’s performance are significantly looking forward to the upcoming episodes more than ever. Ayeza’s chemistry with both Humayun Saeed and Adnan Siddiqui has been sizzling on screen and we’re waiting to find out what happens in the lives of Shahwar, Danish and Mehwish in the upcoming episodes.