Overacting can sometimes be the demand of a certain scene and that is when it fits in. Most of the times, however, overacting is neither the demand of the scene nor something which the viewers enjoy watching in Pakistani dramas. There have been however quite a few instances lately when even the best of actors have been seen exaggerating their characters. Some of the channels have started airing dramas which are perhaps meant for those viewers who miss this overacting from Indian soaps.

Even the best actors in the industry seem to have been directed to give the most exaggerated expressions and overdo the scenes. So much so that some of these actors have made the most serious scenes comic because of this overacting. The responsibility for this obviously rests with the writer and director as well. Actors most often follow the directions given to them in order to meet the demands of the characters which the writers have written. But then they always have the choice of not being part of such projects which end up making people question their capabilities as an actor.

Here is the list of those actors whose overacting makes us wonder why they chose to compromise on their acting skills in order to please the producers.

It is certainly sad watching someone as capable as Asma Abbas overacting to such an extent that there is nothing natural about her acting in Zebaish. Although her character has gone through a lot of serious situations in the episodes which have aired so far yet the screeching and screaming have definitely dulled the impact these tragedies could have had. Asma Abbas’ acting is usually quite ‘contained’ but in Zebaish she has gone overboard more than once. The whole drama is the perfect example of over-exaggeration.

Bushra Ansari’s fake expressions and acting in Zebaish make her scenes difficult to watch. She could have portrayed the character of the most wanted actress on screen without going over-the-top. In fact, her performance in the drama makes you question even those people in the drama who consider her a star! Why did Bushra Ansari decide to go along with such a project? Her heavy make-up and styling suggest that sometimes Bushra Ansari just chooses to be part of projects which give her a chance to get the best makeovers!

Komal Aziz has taken overacting to a whole new level in Raaz-e-Ulfat. The character she is playing is shallow and at times ridiculous, the way she portrays it on screen is even worse. Like all the other actors in this list, her overall look in the play is just as bad as her acting. She was bearable in Mein Na Janoo but in Raaz-e-Ulfat she is simply unbearable as Mushk. Even when Mushk is in the hospital, she is seen in full make-up. Komal Aziz definitely decided to put her looks before her performance in the drama.

When Sonya Hussyn rejected to play the role of Mehwish in Mere Pass Tum Ho she gave so many intelligent reasons for doing so. She said that she had standing as an actor which is why choosing roles which belittle women in any way was never going to be an option. Well, she is playing a role similar to the one Mehwish played in Mere Pass Tum Ho, it is that of a shallow and greedy woman who will eventually ‘sell’ her husband. Everyone knows that the drama is a copy of the Bollywood film Judai and it is clear that Sonya was given special instructions to act exactly like Sri Devi in Judai. While Sri Devi’s exaggerated acting was well-suited for the big screen and people mostly enjoyed it, Sonya Hussyn’s overacting does not look good on television. Anyone who wants to know just to what extent she is copying Sri Devi, should go and watch the film which is easily available online.

Yashma Gill is another actress who has broken all records of overacting in drama serial Pyar Ke Sadqay. She has made sure that she puts on as much make-up as she possibly can and act as much as she possibly could which in turn led to extreme overacting. Although Shanzay’s character is negative and mostly unbearable, Yashma’s overacting makes it even more intolerable. Yashma needs to take it easy! You can’t blame the director in this case since the rest of the actors are doing so well. 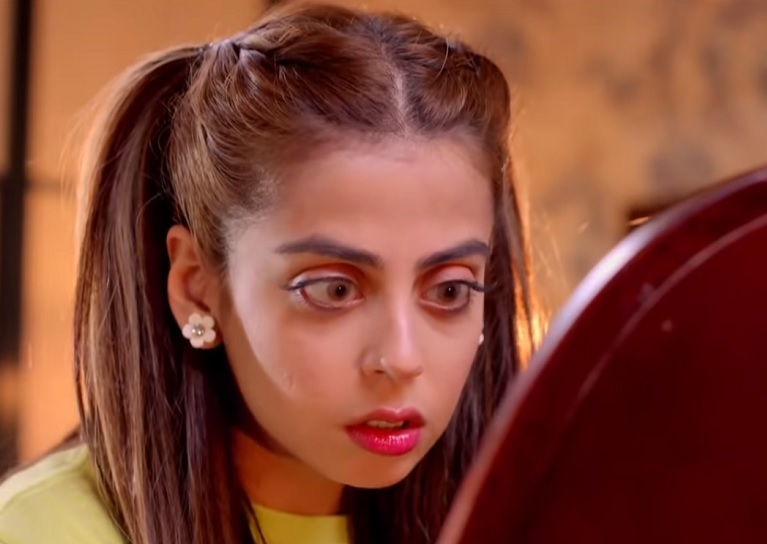 What is wrong with Zahid Ahmed? First, he chose a terrible project like Mein Na Janoo to work in and now he is acting like a cute teenager who also happens to be a father in Mohabbat Tujhe Alvida. He is obviously trying to look ‘comic’ in the role but in some of the scenes watching this grown-up man acting like he is a kid is not cute at all. Zahid Ahmed’s performance in so many scenes is so exaggerated that you just want to forward his scenes.

Can Zara Noor Abbas please forget all about the character she played in Ehd-e-Wafa and move on! Apart from the overacting, some of the scenes have been so badly written that those scenes which should technically make you cry, actually make you laugh! Her reaction when she hears about her father’s death was the most hilarious response we have seen on television which was made even more so because of Zara’s bad acting.

Here is an example of the extreme overacting being done by Zara Noor Abbas and Asma Abbas in Zebaish! The dialogues are just as funny as the acting although this is obviously a really serious scene!

Which actors do you think are overacting in current dramas? Share your views.

Here is Why Kubra Khan Left Bollywood Movie in the Middle