Parchaiyaan to go On Air Tomorrow on ARY Digital!

February seems a happening month in the drama industry of Pakistan where new projects are emerging on the screen, offering the viewers a variety to see this year.  Adding a new name in the list, Seema Ghazal’s Parchaiyaan will go on air tomorrow, that is, 12th February, 2013 at 8 pm on ARY Digital.

This Melo-romantic serial has already created a good audience through its promos and viewers seem enthusiastic about the show. Been directed by Shakeellie Khan, the drama enjoys a valuable cast including great actors like Waseem Abbas, Rubina  Ashraf, Aijazz Aslam, Sana Khan and many more. ARY is trying its best to over pass the viewership been created by HUM TV and for that the efforts are visible. There are a couple of other dramas that has recently been aired on ARY  like Silvetein that are attracting viewers considerably, resulting in a respectful TRPs of the Channel 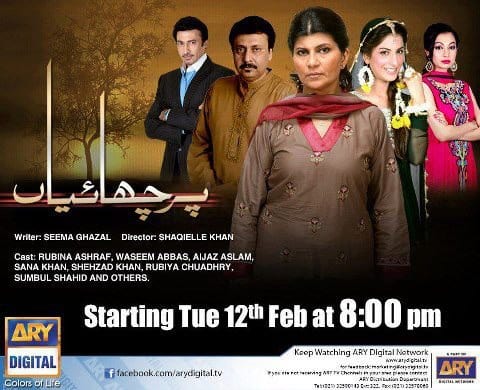 The audience looks forward to the new serial and hope that it would be as entertaining as the previous projects of the channel.

Best Wishes to the Team,