While the entire world is celebrating the spirit and resilience of doctors around the world for fighting the battle against coronavirus on the frontline, there is someone unhappy about them taking some time off and relaxing for a while. In fact, there is someone who thinks, the doctors unwinding themselves are just wasting “precious” time that could be used for saving lives.

We’re talking about none other than the Pakistani actress Ushna Shah, who recently tweeted how she found the viral video of doctors dancing while taking a break, time consuming and that it was the ‘precious’ time that these doctors were consuming to dance.

Although Ushna later went on to delete the tweet, perhaps she had some sense knocked into her, about being conflicted on the issue, but people have been calling out the actress for being extremely insensitive, given that these doctors have been fighting coronavirus on the frontline, forgetting their families, their homes or their own health.

Here are what people have been saying about Ushna’s tweets;

Some called out Ushna for spreading negativity

Some said Ushna should take a break from her own priviliged life and get a reality check to be more appreciative.

Some people said it was the doctors’ right to take a break, however they wanted to.

People called Ushna out for her illogical and nonsensical comment.

Some even got a little personal.

A number of people questioned about the insensitive thoughts that said doctors were required to work round the clock. 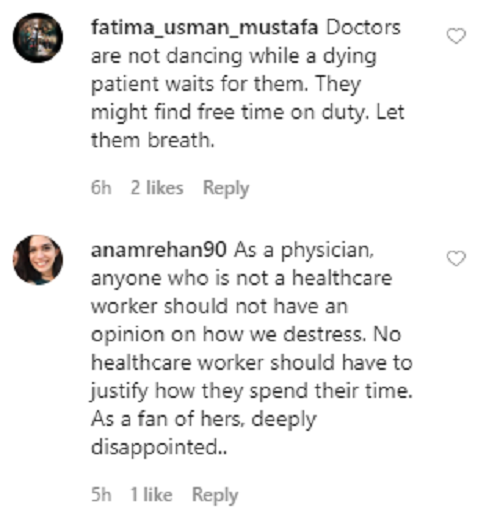 Some said, quarantine had gotten to Ushna’s mind.

A few people called out Ushna for sitting at home in peace and making such insensitive comments. 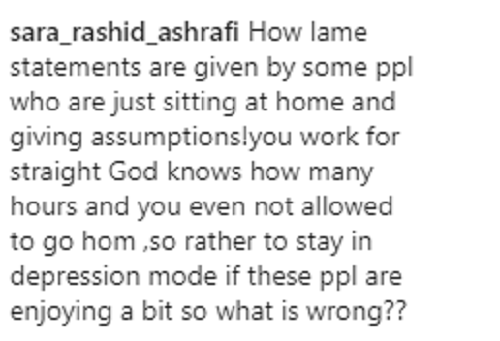 What do you think about the entire scenario? Let us know your thoughts in the comments below. Is Ushna right? Do these doctors deserve to dance while they take a break or not?