Mahira Khan is the first Pakistani actress whose movie in Bollywood joined the hundred crore club. She starred opposite Shahrukh Khan in Raees. Later that year, Mahira Khan did a rap song on stage at the Lux Style Awards alongside Osman Khalid Butt. A line from that rap was “Kya aapki filmein bhi hain 100 crore kamatein?” which she had to sing due to the demands of the show’s script. Saba Qamar was the actress who boycotted the same LSAs for their prejudice and consequently, jokes were made on her boycott. So, Saba Qamar’s Hindi Medium has surpassed the business of Raees worldwide and Saba had the answer to Mahira’s question finally. Saba took to her Instagram and shared a screenshot of express tribune reporting that her film has surpassed Raees and she had a take on it in the caption: 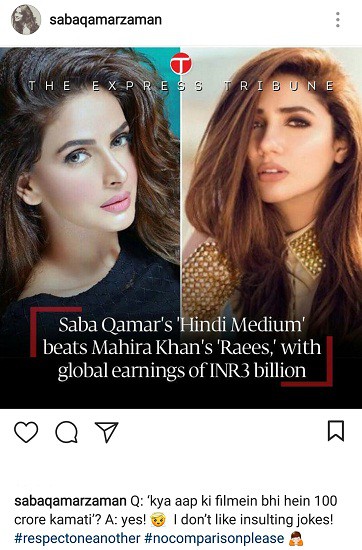 And Saba has finally answered! She does not like insulting jokes and she respects her co-stars too!