Sajal Aly and Ahad Raza Mir; one of the most loved and cherished celebrity couples of Pakistan tied the knot on March 16, 2020 in Abu Dhabi. It was a destination wedding which was attended by their close friends and family. It was an intimate family affair and not a lot of details and pictures made it to social media. Ahad and Sajal have now started to share selective pictures on their Insta handles and the fans can’t help praise what they are getting to see.

After their wedding pictures, the photos of their wedding reception made it to the social media, however they were clicked personally by those who were attending. The professional photos did not make it to social media. However, just today, the pictures of Ahad and Sajal’s mehndi function came in, which they both decided to share with a similar caption that states ‘Our Mehndi’, which was held at Ematies Palace, Abu Dhabi.

Here are the details about Sajal and Ahad’s Mehndi Outfits and Look:

Sajal Aly wore a gorgeous pastel shaded flared mustard Pishwas. It was a half sleeves shirt with a sequin work bustier. The tissue fabric was used to create the flare and the silver embellishments were used to give it a formal look in the form of motifs all over as well as border at the bottom of her shirt. Sajal wore a flared lehenga underneath, which had multi-colored jamawar finishing, to make this outfit mehndi appropriate.

The dupatta was made of plain chiffon with similar multi color jamawar finishing underneath. The front side of the dupatta had gota lace and tassels, which once again gave it a vintage look and there were two borders all around the dupatta, once of which was achieved by the gota lace and the other one with silver sequins, following the similar design pattern which is on the sleeves of her outfit. The dupatta also had sequin motifs splattered all over, similar to the ones which are on the flare of her Pishwas. The overall look of the dress gravitated towards simplicity with pop of colors, however the sleeves had heavy designing achieved with silver embellishments for that extra formal effect.

Ahad Raza Mir wore a maroon kurta with rustic gold embroidery splattered across the kurta. The neck and chest have a very decent and intricately done embroidery. He paired it with white churidar pajama. 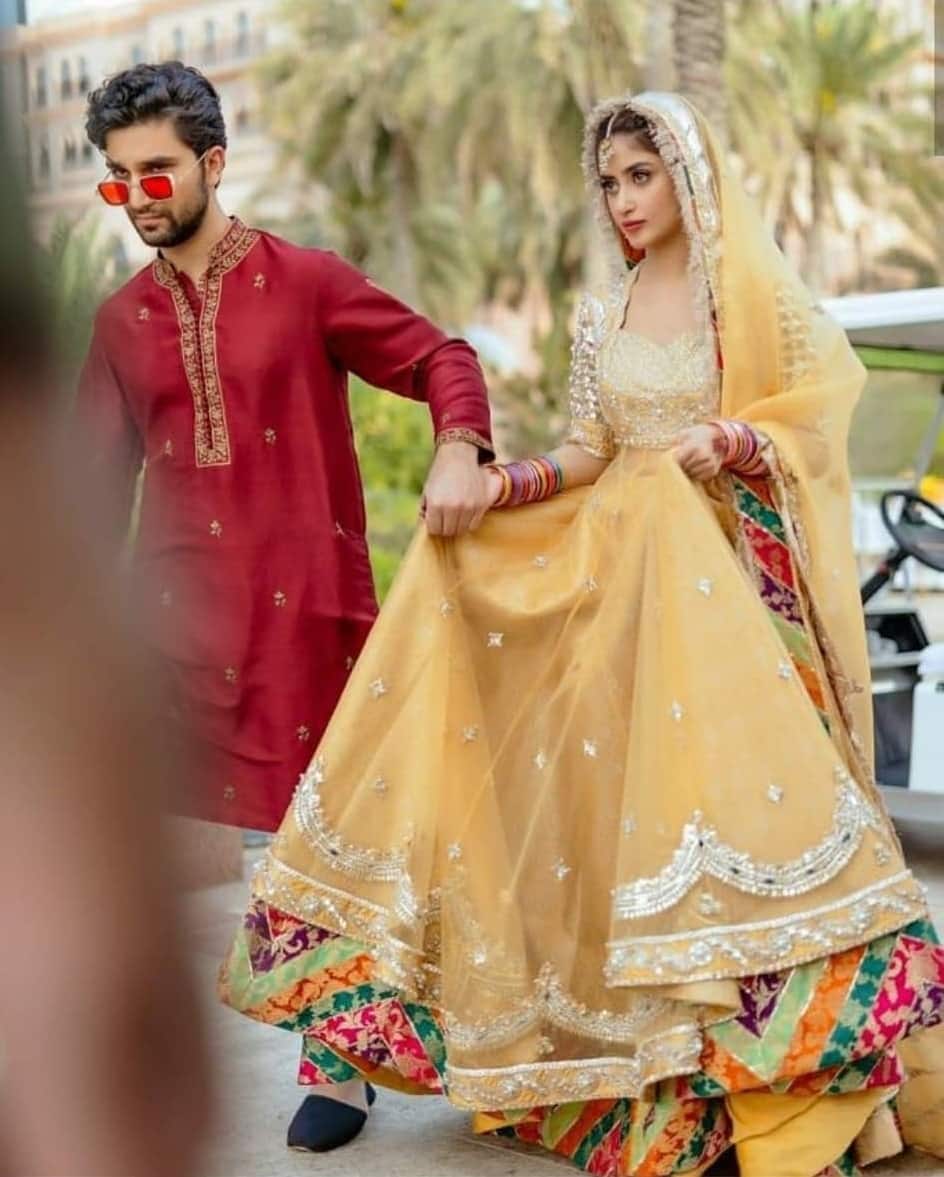 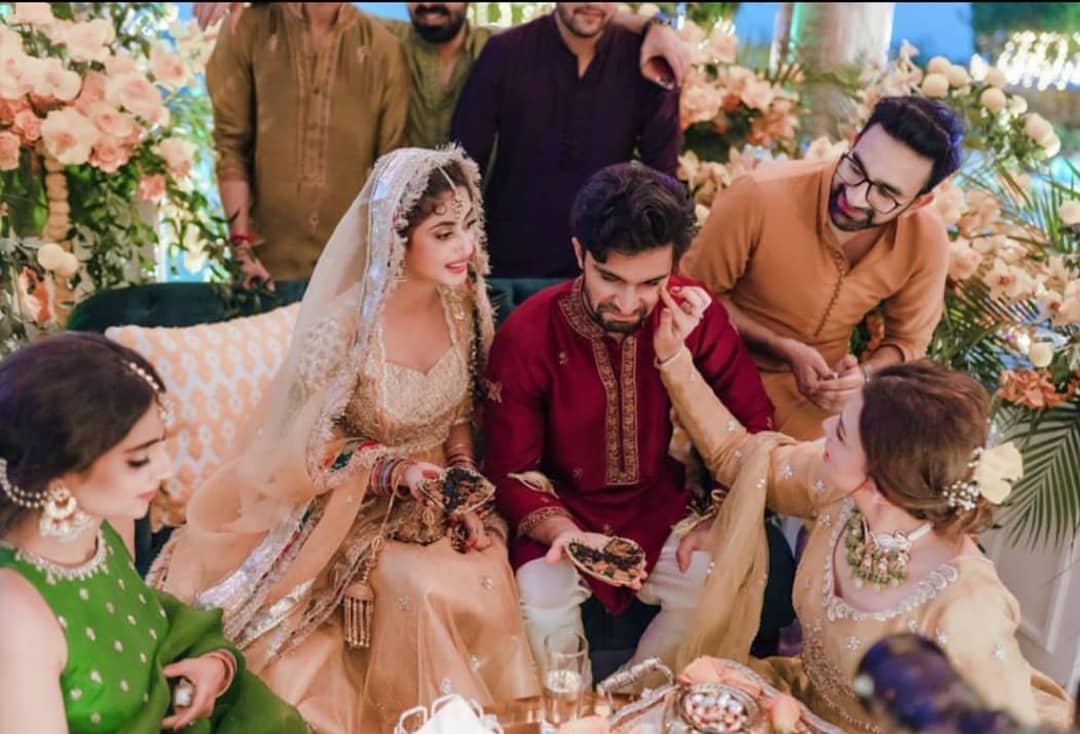 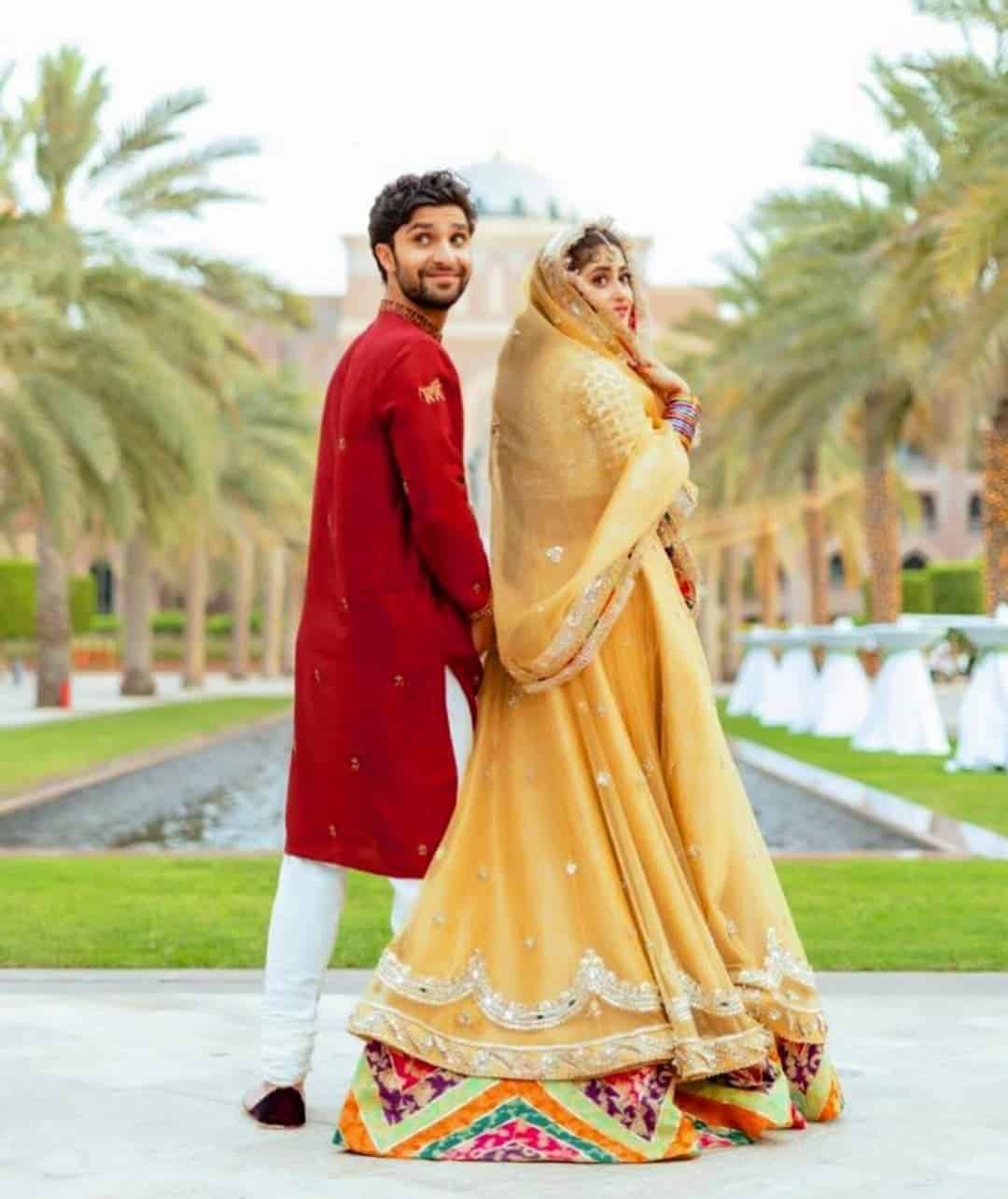 Sajal Aly chose makeup artist Mubasshar Bhatti to do her mehndi makeup. The makeup artist gave her a natural makeup look, which allowed her natural beauty to shine through. Her eyebrows were defined and eyes accentuated with the help of eyeliner. She is wearing a pink toned blush and a lot of highlighter to achieve the glow-from-within look. Sajal is wearing a gorgeous shade of pink lipstick. The makeup artist also applied false eyelashes to give her eyes a lot more dimension.

Sajal tied her hair back and the center partition allowed a place for the tikka. She wore her hair in a braid and the hairstylist amped up the plain braid with dainty small floral pieces all over her braid which peaked through the see-through dupatta and looked super cute and girly. 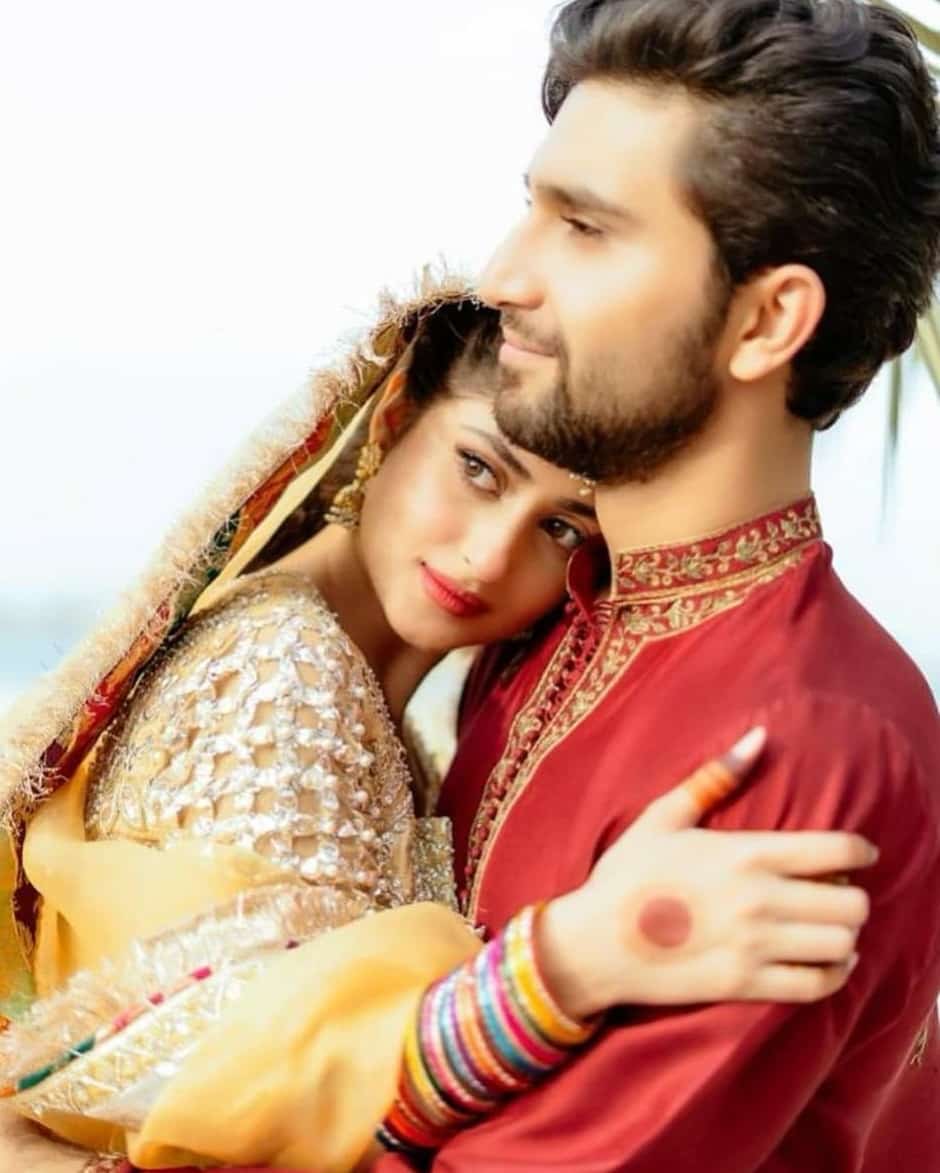 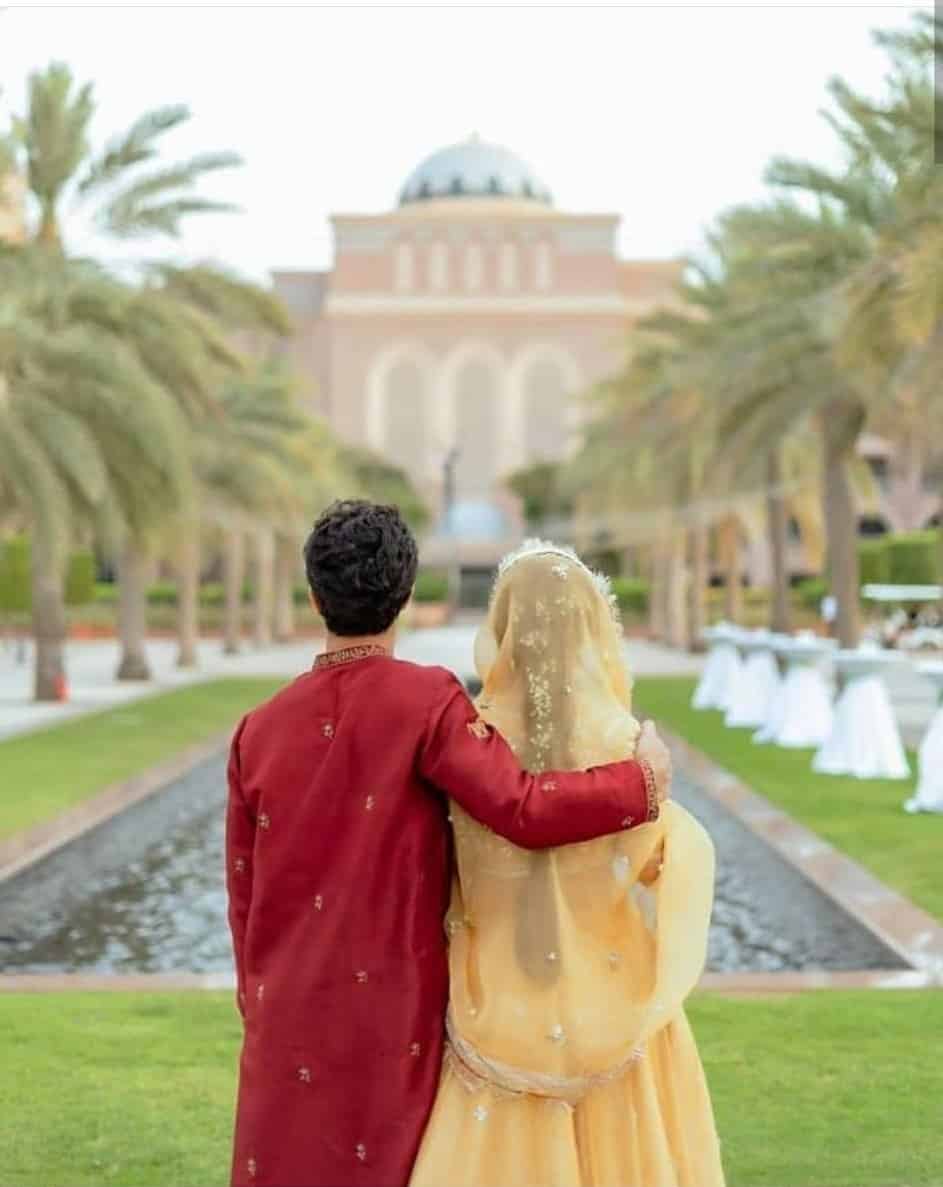 Sajal Aly wore a dainty tikka on her forehead and a cute small pair of jhumkas. She also wore colorful bangles which went perfectly well with the pop of colors in her outfit. She seems to be wearing a dangling chain around one of her wrists during the picture where she is sitting on stage with Ahad during her mehndi function. 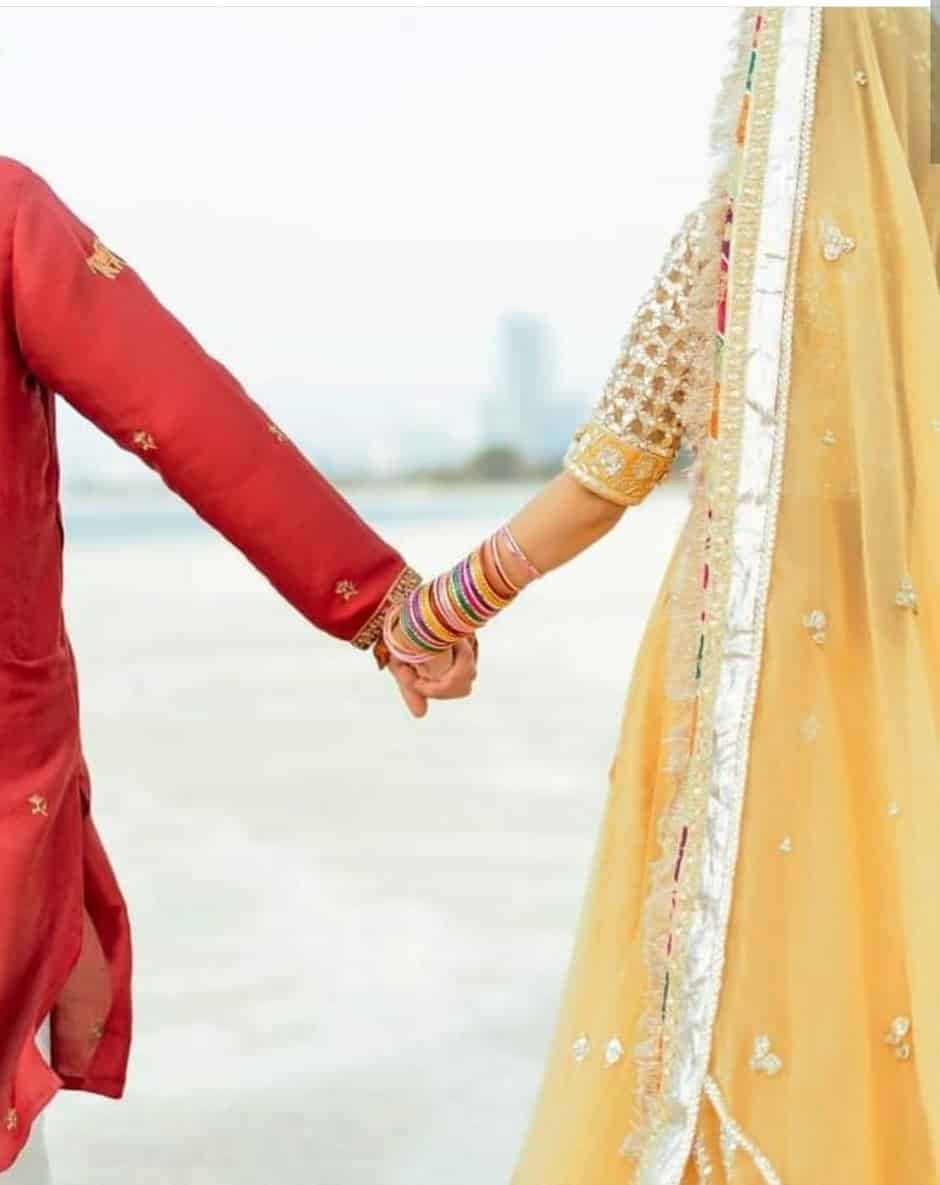 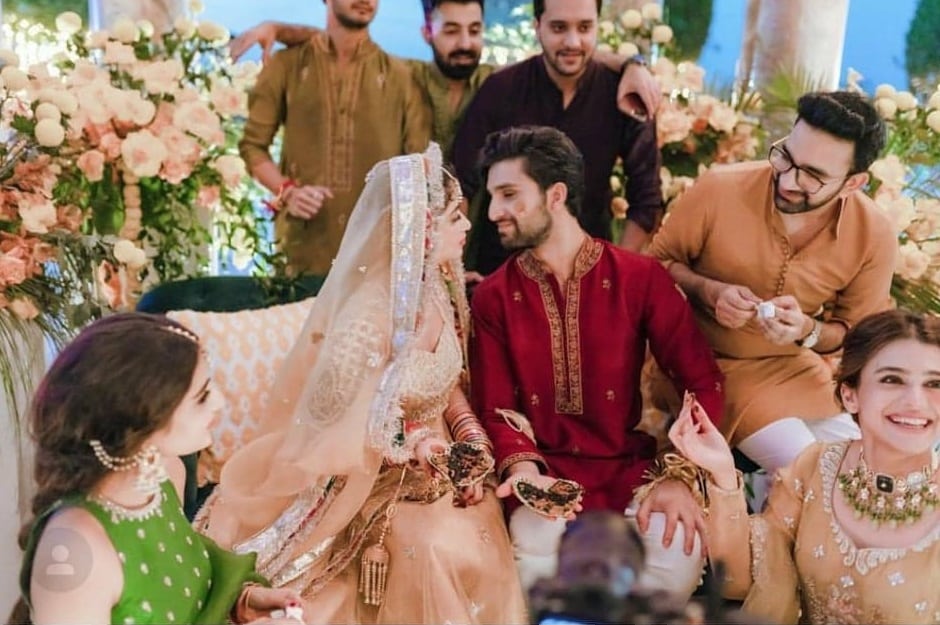 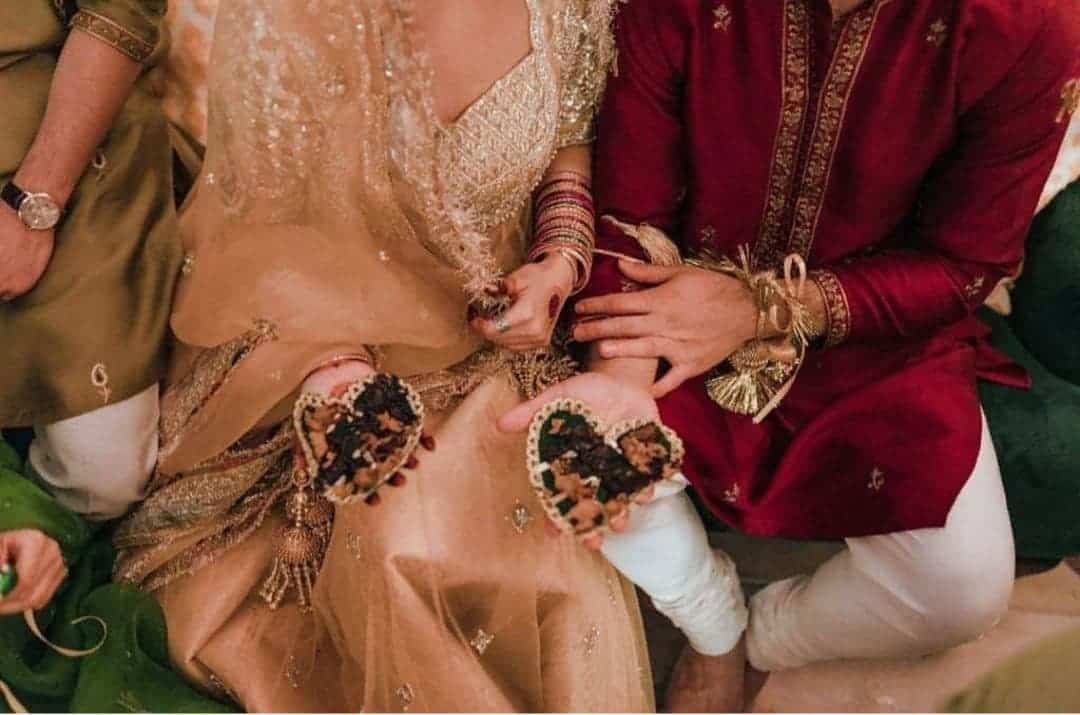 Ahad Raza Mir seems to be posing with red sun glasses in one of the pictures. He completed his outfit with a pair of black khussas. The look that he carried on his Mehndi function is very much similar to what he has sported in Ye Dil Mera and he looks very smart. 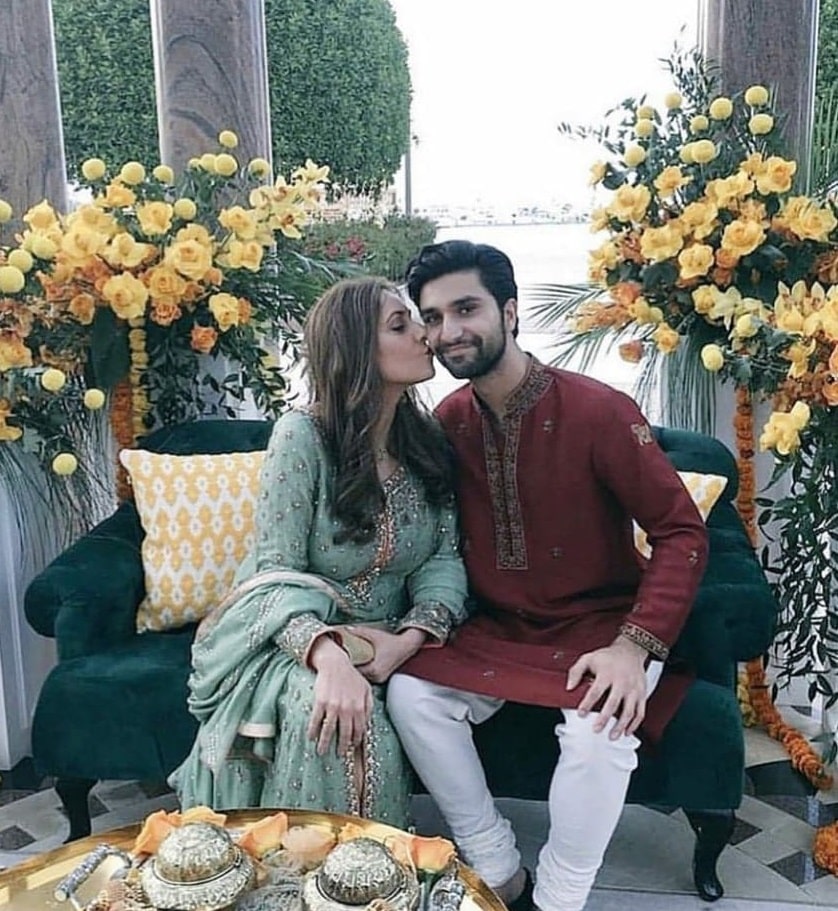 These were some details about Sajal Aly and Ahad Raza Mir’s Mehndi outfits and overall looks. Did you like their outfit choices? Feel free to share your opinion in the comment section below.