Salma Agha, ready to back on silver screen

Salma Agha, might also appear on silver screen again. With announcements of many new film projects, Singer and Actor, Salma Agha, is approached by many film producers with film offers. As per media reports, Farooq Mengal, Saahir Lodhi, M. Parvez Kaleem and Sarwar Bhatti (Producer of maula jutt) have approached Salma Agha,  and offer roles in their upcoming films. Farooq Mengal has even included name of Salma Agha in the cast, when he announced his film Hijrat a year back, without signing any agreement.

Salma Agha lives in Mumbai, India these days Farooq Mengal approached Salma Agha, but the deal was not finalized as Salma due to disagreement over amount. But Salma has acknowledged that the script of film Hijrat is worth mentioning. Salma is now waiting for formal offers from Saahir Lodhi, M. Parvez Kaleem and Sarwar Bhatti, though all have already informally approached her.

About Salma Agha Salma Agha is a British citizen of Pakistani origin. She has worked in Pakistani films in 1980’s and 1990’s as a singer and actor. Her famous films in Pakistan are Bobi (as Singer),  Taqat Ka Toofan and Bhaabi Diyan Chooriyan. 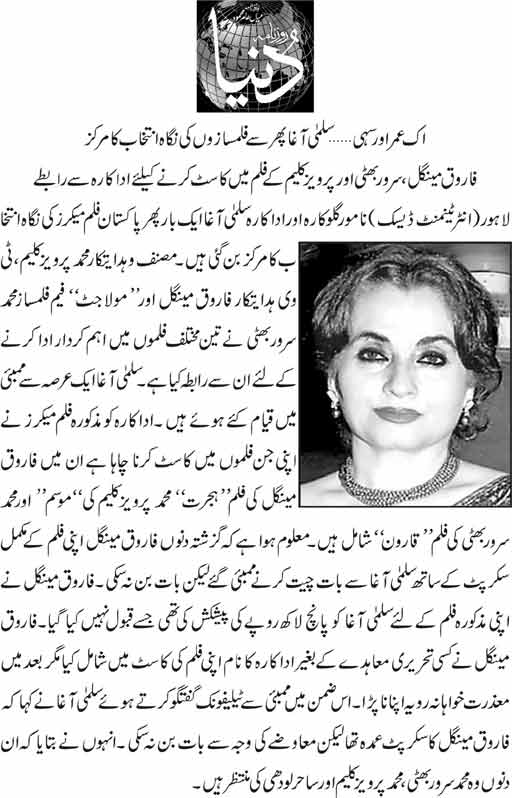