Drama Seeta Bagri was announced a few months back and in no time the audience had built lots of expectations since Sarwat Gilani has done some great work in the past and is still doing in present too. Seeta bagri is currently going on air and is just 3 episodes down yet but it has managed to built a niche audience for itself. The drama basically highlights the life of the Hindu Pakistani community.

Speaking about Seeta Bagri in an interview with BBC, Sarwat stated, “These minorities are our friends and they have been a huge part of our lives.”

Sarwat further explained why she was motivated to do the role of Seeta:
“Seeta is a girl who thinks about other females too, and wants to spread knowledge and awareness. It’s rare nowadays when people want to make a difference.” 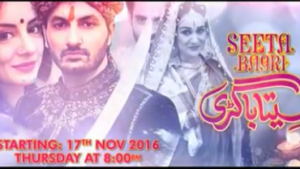 Sarwat we hope your drama manages to deliver the right message to the audience.