Shehroz Sabazwari to work in Bollywood

He may have done his first film role in a family project, Khulay Aasman Ke Neechay (directed by his uncle Javed Sheikh, and starring as the younger self of the character of his other uncle, Saleem Sheikh), but the young TV actor Shehroz Subzwari is taking the big leap to Bollywood strictly on his own terms.

Instead of hankering after a mainstream Bollywood role alongside A-list stars, Shehroz is making his B-town debut with the lead role in noted Bengali director Riingo Banerjee’s debut Hindi film, Luv’s Story.  “It may not be a run-of-the-mill masala movie, but it ticks all the boxes for me as an actor,” said Shehroz, while talking to Instep.

About landing the role, he shared that the producer Shamik Basu scouted him. “To be honest, I don’t have a brilliant body of work to show, and obviously I’m no Fawad Khan,” he said modestly, “But Shamik Basu felt that I could do something in Bollywood. Nothing worked out for a while, and then I received the script for Luv’s Story. Riingo Banerjee is a brilliant director from Bengal and is very particular about his actors. He liked my look, but I still had to send audition tapes. So Syra and I shot a few scenes and sent the tapes over, and thankfully he approved.”

A romantic thriller, Luv’s Story will see Shehroz play the role of the titular character, a young boy with subnormal intelligence. He stars alongside Bengali actors, Bidita Bag and Aryaan (picture in the first look above). According to Times of India, the film is based on three best friends who grow up together in an orphanage in Kalimpong, a hill station in West Bengal. While Shehroz’s character Luv isn’t the brightest on the block, his friend MC is sharp as a knife, and on the lookout for ways to get rich quick. Together, they form a love triangle with Kushali, who has eyes on Luv and is adored by MC. After a murder takes place, the film takes a turn as Luv becomes the prime suspect.

“I’m very happy that I’ve gotten in touch with the right people; Bengalis are known to be highly educated people, and it’s an honour to be selected by them. I want to make Pakistan and my family proud,” he added. Shehroz will be flying across in the end of January to begin shooting for Luv’s Story in Calcutta and Kalimpong. 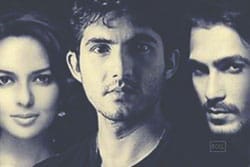 Acknowledgment: Whole content is borrowed from English Daily The News