I’m seriously contemplating giving up watching Pakistani dramas altogether unless the channels rethink their content. We’ve been discussing the increasing influx of topics that centre around marital discord- divorce, halala and extra-marital affairs. We now have a couple of others joining the list of ever-increasing problems in Pakistani society (if one were to believe what our exceptional drama writers come up with). The hot topics this season are *drumroll* Nikah pe Nikah and beghairat/ badniyat behnoi.

Tragedy happens everywhere- birth, death, divorce, financial setbacks, the list is truly endless. If there was an educational or even informative component involved, I wouldn’t think twice. But how many times can you sit through a drama that discusses the exploitation of women- it’s almost as if we are catering to perverts who enjoy watching such nonsense unfold. A divorcee or widow will almost always find herself at the mercy of others who are only too eager to take advantage of her. Bhabi, which is currently on air, had a rather graphic visual of a behnoi attempting to violate his recently widowed saali. Another drama, Janam Jali  had a similar scenario, although here, the saali wasn’t a widow, but one rejected by her husband and later accused of being badkirdaar. Here’s another one- badkirdaar– you’d think every working woman, or highly opinionated woman is by default badkirdaar. It takes a single moment with another man for her husband to assume the worst in her; any random man a woman talks to implies she’s having a full fledged affair with him! 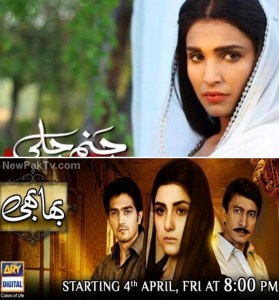 Another topic gaining popularity is Nikah pe Nikah. Oh, yeah, this one’s really taking off since talaaq is so last season. So what exactly is Nikah pe Nikah, you ask? Well, if a woman who is married goes ahead and married another man. Women are not allowed to take more than one husband at a time. How then is this possible? In the recently concluded drama, Shab-e-Zindagi, Mariam, is the main female lead. Her husband is presumed dead so she leads the life of a widow. After countless tragedies, she decides to marry her father’s friend and just when she starts adjusting to her new life, her husband returns and files a case of Nikah pe Nikah– a Molvi gives a fatwa that in this case she must return to her first husband but her second husband conveniently dies paving the way for a blissful reunion. After the warped story in Rishtey Kuch Adhorey Se, this one was another mind-numbing drama. Another drama, Maang is the story of a man who loves a woman but on his mother’s insistence, marries her sister. Shortly after his mother’s death, he divorces his wife and marries the woman he loves. Just as things start looking up for him, a man appears claiming to be the husband of his current wife and thus begin the court hearings that deal with Nikah pe Nikah. 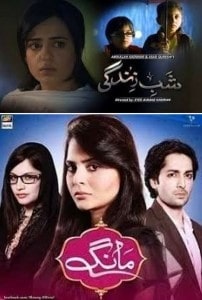 Why blame foreign content for the instilling twisted ideologies when our Pakistani dramas are doing a splendid job on their own? While the problems are rampant, they are not as common as our dramas would have us believe. And even if they are, why can’t we focus on some of the positives for a change? What would it take to revitalize our drama industry and bring forth stories that provide some real entertainment value and some thought-provoking subjects? What do you have to say?