Whether the news circulating on media is false or based on true claims, we have no idea.We cannot ascertain the fact based on only one side of the story and considering how this world can furnish fake proofs, there is absolutely nothing that can be trusted. The same rings true for Uzma Khan and her sister Huma Khan, who made a lot of hue and cry on media after a video of them being beaten and thrashed by Amna Usman Malik went viral.

Just look at the home, blood scattered all around the house. One of the sisters (the one in black) had her feet bleeding from all glass on floor. This is such barbaric act and a strict action must must be taken against those women! #UzmaKhan #HumaKhan #JusticeForUzmaKhan #Lollywood #PakCelebz #PakistaniCelebrities #EntertainmentPopcorn

A post shared by Entertainment popcorn (@entertainment_popcorn_offical) on May 27, 2020 at 8:46am PDT

Both Uzma and her sister had stated that they would fight against the system and stand by with their truth of having been assaulted in their own house. Their lawyers also made a lot of noise on social media, calling out the authorities to register an FIR and deliver justice against the elite class. Uzma had also done a press conference stating her life was at risk.

A post shared by Entertainment popcorn (@entertainment_popcorn_offical) on May 28, 2020 at 6:56am PDT

However, everything has gone down the drain as Uzma Khan herself surrendered her fight against a hefty monetary settlement as is being reported.

According to the copy of the settlement document that has gone viral, Uzma Khan’s sister Huma Khan took back the FIR stating everything had been a misunderstanding and no voilence had occured against them. 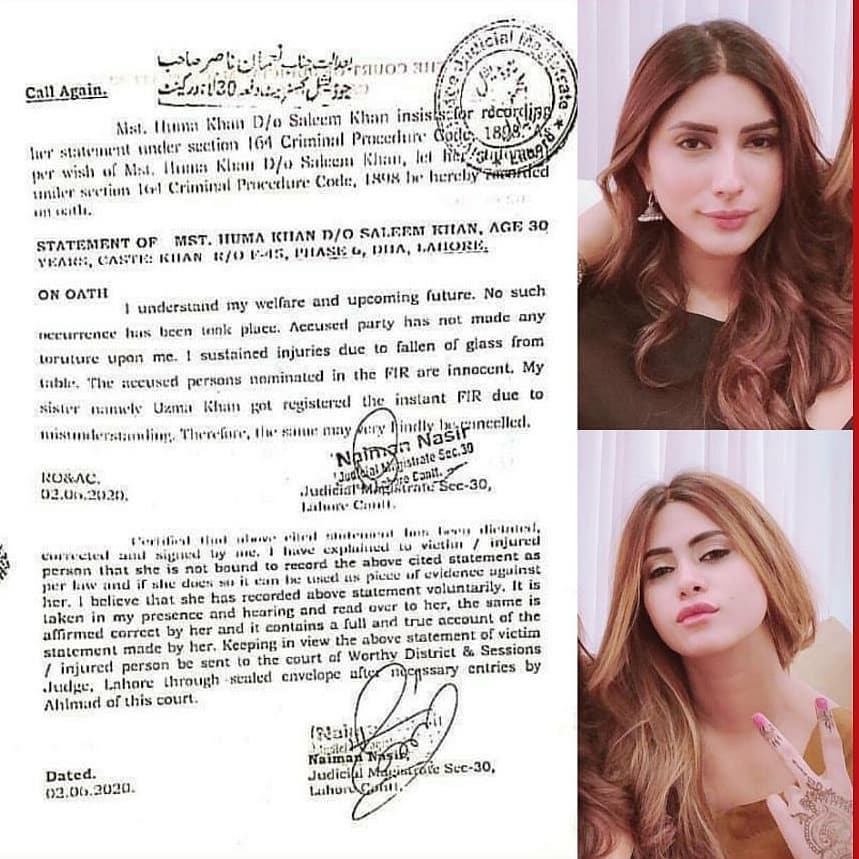 The clause states that “My sister Uzma Khan registered an instant FIR due to misunderstanding.” It also states that the injuries both sisters sustained were because of broken glass at their house.”

Owing to the out of court settlement Uzma Khan’s legal counsel and lawyer Khadijah Abbas and Hassan Niazi both issued statements about disassociating themselves from the case.

This is to announce that we are disassociating from #UzmaKhan case.I understand the reasons of any settlement by two aggrieved women in a rigged system,my conscience doesn’t allow me to be part of any of that,even in a professional capacity.
Struggle against lawlessness continues

“Since the first day, I had made it clear to my client that we won’t be part of any settlement. I only accepted the case to support the resolve of Uzma to get justice for her,” wrote Hassaan Niazi

Since the first day, I had made it clear to my client that we won’t be part of any settlement. I only accepted the case to support the resolve of Uzma To get Justice for her. (1/2)

Uzma and her sister had made a big hue and cry regarding the issue. Uzma had also gone on record to request the higher authorities and even the PM Imran Khan to help them obtain justice in their case.