Who Does Hamza Ali Abbasi Blame for Law Disobedience In Pakistan

Hamza Ali Abbasi has always been popular for his views, his opinions and his stances on issues, be it a political issue, an Islamic or religious issue or a social issue. Hamza always raises points on issues whether in favor or against something, for which he sometimes have to bear serious consequences. Despite everything, he still is very opinionated and he sure is famous for it.

Recently on a morning show with Sanam Baloch, Hamza praised Pakistani youth to which Sanam said that this same youth is the one who takes pride in breaking traffic signals but when they go abroad they all are up for following traffic rules. Does that mean that they don’t respect their country’s Rules and regulations? 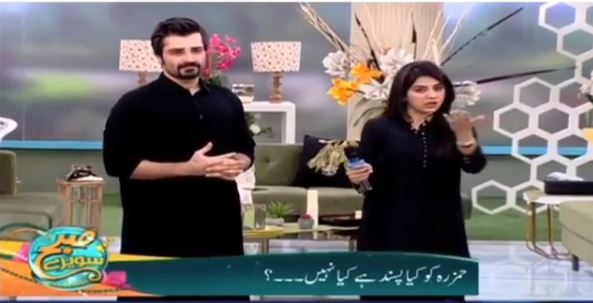 Hamza replied that, our people are very good and they should not be underestimated. He said the problem arises when the Law is not implemented. According to Hamza the law implementing authorities are at fault for not making sure strict law maintenance . He by giving an example of Karachi said, that it can’t be expected that the whole population of Karachi will abide by the laws all by themselves.

Hamza made his point saying that a person from Pakistan goes to Dubai as a driver and within twenty four hours he is seen abiding every traffic rule. It is not because of himself it is due to the fact that laws are being implemented very strictly there and everyone knows that in case of not abiding the law, consequences could be very harsh.