Why Sajal was chosen for Mom?

Sajal Ali will soon make her debut alongside Adnan Siddiqui and Sridevi in Mom. She has quoted it as her dream debut and is very excited about it. This is what she said on trailer release:

“They say dream big. I did. They say dreams come true. It did for me. Sharing the screen with Sri Devi, Akshay Khanna, Nawazuddin Siqqique and Adnan Siddiqui. It has been the most liberating experience of my career. I would specially like to mention our Director for keeping such a high level of faith in me. Thank you so much Sir! Ravi Udyawar
Mama- This one is all and all for you.” 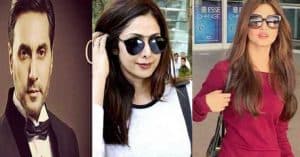 The film is directed by Ravi Udyawar and this is his debut too as a director. This is what he said in an interview about his film and why he chose Sajal to play the troubled 18 year old:

“It’s been a long journey, Everything fell in place when I met Boney (Kapoor) sir. He’s a director’s producer.” he said while appreciating the producer. “Unspoken words and silences can convey a lot more than dialogues,” he says and discloses that he chose Sajal Ali for her expressive eyes and commends her for an “effortless performance”.

Mom is releasing on July 7th. We wish Sajal Ali and Adnan Siddiqui best of luck for their debut.